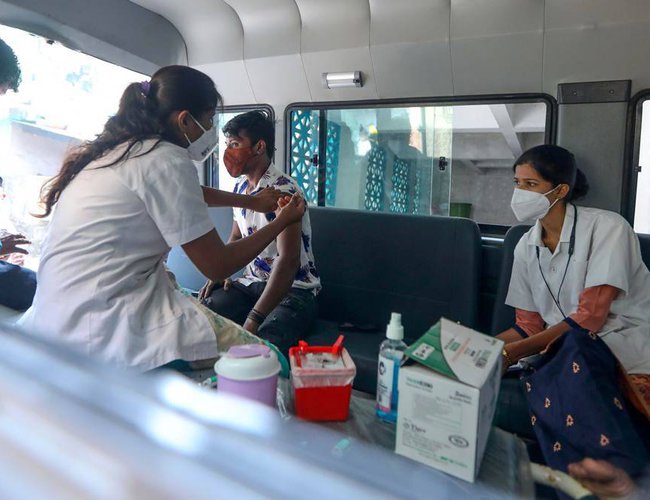 The Union Health Ministry has red-flagged nine urban districts and six “emerging states of concern”, including Maharashtra, Delhi, Gujarat, West Bengal, Karnataka and Tamil Nadu, on the basis of an increasing trajectory in weekly case counts and positivity rates.

Calling for “heightened vigilance” leading into the new year in the backdrop of a “sharp increase” in Covid cases over the last four days, the Centre Thursday said the spike being reported from several urban districts is likely part of the global rise pushed by the highly transmissible Omicron variant.

The Union Health Ministry has red-flagged nine urban districts and six “emerging states of concern”, including Maharashtra, Delhi, Gujarat, West Bengal, Karnataka and Tamil Nadu, on the basis of an increasing trajectory in weekly case counts and positivity rates.

Summing up the data, Dr V K Paul, who heads the national Covid task force, said “there is a changing scenario in the pandemic situation”.

“We were nationwide having around 7,000 cases, and today we are seeing an uptick — 13,000 cases have been reported yesterday. Clearly, we are seeing an increase in cases. Several states are showing a trend, which is going up. The reproduction number is 1.22 from the available data. The cases are now enlarging, not shrinking. So far, deaths are stable — they are in the range of 260, below 300, typically. That remains stable and is reassuring, as of now,” Paul said.

Paul also cautioned that any data on lesser severity of Omicron cannot be taken for granted, at this moment.

“As the scenario emerges, we believe what we are witnessing could be part of the global rise in cases, pushed by the Omicron virus…this variant is highly transmissible and that perhaps explains the speed with which it is rising in the world. The severity issues are still unsettled; the WHO statement says severity is, hopefully, mild. But it cannot be taken for granted because it is still a work in progress,” he said.

The Health Ministry, meanwhile, listed the six states of concern, based on a comparison of weekly cases and positivity rate of the last seven days (December 24-30) with data from the preceding seven (December 17-23):

Paul said the emphasis should be on responsible Covid-appropriate behaviour, not panic. “It is a reality check today and…there is no need to panic. Because as a nation we are prepared, we have experience, we have the massive shield of very high coverage of vaccination. But there is a need to be responsible and to be disciplined. We must follow the restrictions and rules. All variants enter through the same route, and that route can be blocked by wearing a mask. So mask, mask, mask, has become even more important today,” he said.

Asked if India is witnessing a third wave, Paul said: “This is an emerging situation. Where this will take us and where this should be stopped, is all in our hands. We have put all efforts to stop it. We have to suppress (the transmission) right now and at this level. It is in our hands, by vaccination, by precaution, and other public health measures,” he said.

The task force chief warned that “this surge could be significant” and asked everyone to “be prepared” since “it may not necessarily be mild”. “Be prepared, the health systems are ready for the maximum possible level,” Paul said.

ICMR chief Balram Bhargava said the Centre will soon come out with guidelines on whether the third “precaution” dose, to be rolled out on January 10, should be of a different vaccine platform.

“We are deciding what is the population that will require this vaccine, including healthcare workers, frontline workers and 60-plus with comorbidities; what are the new vaccines available; which vaccines can be given after which vaccine in terms of safety and efficacy. We are analysing all the data… Whether it is going to be the same one or different one, before January 10, we will have clear-cut recommendations,” he said.