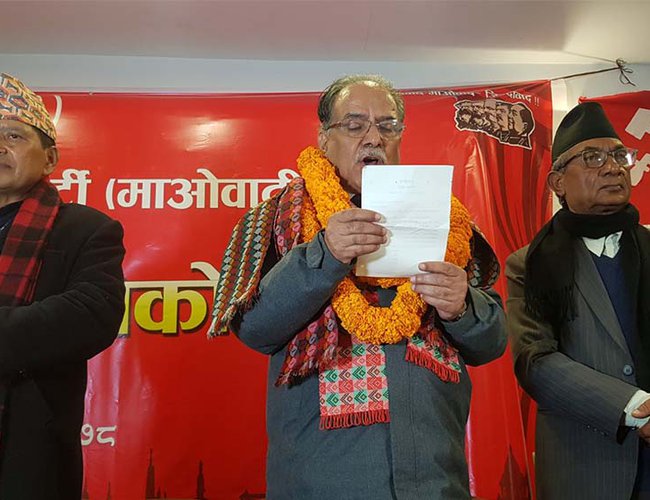 Although Communist Party of Nepal (Maoist Center) leaders have been claiming that their party is most inclusive and democratic, their recent secretive and low profile convention shows otherwise.

Like all secretive communist parties of the world, Maoist Center leaders choose to conducts all important meeting in secretive ways not allowing lower rank party cadres in the meeting.

The newly-elected central members were sworn in by the party's Central Election Commission Chairman Bishnu Pukar Shrestha. The 8th National General Convention of the Maoist Center, which started on December 26, elected 236 central members on Sunday. The number includes 111 from the open category and 125 from the inclusive category.

Narayan Kaji Shreshtha, vice-chairman of CPN (Maoist Center) has viewed that the eighth General Convention of the CPN (Maoist Center) is not a ritual for formality. Leader Shrestha said so while addressing the inaugural session of the general convention. He said the general convention will lay the basis for the formation of a new revolutionary party.

"General Convention is not a formal ritual. We are here for building a new base of a new revolutionary party," he said, "Our convention will come up with ways to address the problems of our country."

He pointed at the need for a retrospection among leaders and parties and necessary changes so as to bring about a great change in the country. Social-economic achievements can be made only when the leaders change themselves and work for it, he said.

"Our Maoist movement is not only limited to our country, it is a part of world communist movement and also a part of overall revolution across the globe."

Leader Yadav lauded the role played by Maoist Center Chairman Pushpa Kamal Dahal 'Prachanda' in the Madhes movement by being liberal to it.

"If comrade Prachanda had not been liberal to Madesh movement and if he had not taken a clear stand that the Maoist Party would not accept constitution without federalism, there would not have been Madhesh movement."

He objected to the way Prachanda path was abandoned in the middle when it was necessary to develop further. "The Prachanda Path was developed by the People's War, but we abandoned it in the middle. Revolution got confused. What did comrade Prachanda do? People started to question and so did I. This led to many leaders leaving the party. I also did, but returned. And now what has become our status today?"

Leaders of different political parties have stressed that the policy to be taken from the ongoing general convention of the CPN (Maoist Centre) should become a milestone in safeguarding nationality.

Expressing their messages of the best wishes to the general convention of the CPN (Maoist Centre) in the federal capital on Sunday, the speakers said that the parties should be united in the agendas of nationality despite their differences in ideology and principles.

The leaders said that the right decision to be taken by the general convention would be vital in safeguarding the nationality in the future.

General Secretary of the CPN (ML) CP Mainali said that serious questions were raised on Maoists, and the confusions would prevail if the general convention failed to draw a conclusion.

Likewise, leader of CPN (Revolutionary Maoist) CP Gajurel termed the expressions of CPN (Maoist Centre) Chairman Prachanda for the unity of Maoist forces as positive gestures but called for a concrete foundation to materialise this.

If the unity of the former Maoist forces was required, some crucial bases should be prepared, Gajurel added while hoping that the general convention would prepare that foundation. He called for the Maoist Centre leaders to come up with the commitment to abide by the decisions taken by the first meeting of the central committee during the commencement of the People's War.

Vice-Chairperson of Rastriya Janamorcha Durga Poudel said that the policy to be taken by the Maoist Centre's general convention would be of national importance, adding that the attacks on republic, democracy, secularism and nationality were rife from different angles.