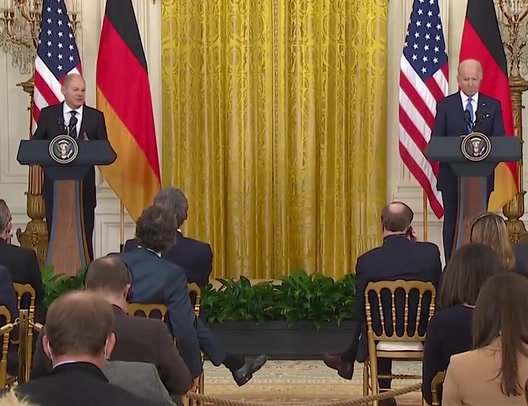 US President Joe Biden and German Chancellor Olaf Scholz have warned Russian leaders they will "pay a heavy price" if their troops attack Ukraine. On Monday, Scholz made his first visit to the White House since taking over in December.

Both leaders took pains to describe their efforts to work together. Biden said they are in "close cooperation." Scholz said they are "absolutely united."

Biden warned he would halt a pipeline built to bring gas from Russia to Germany. German officials have delayed opening up the line, known as Nord Stream 2.

The Germans buy half their natural gas from Russia. They do not want the pipeline to be canceled. Scholz avoided mentioning the project and said his country would "act with the US."

Biden has ordered about 3,000 American soldiers to be positioned closer to Ukraine. Another 8,500 are on high alert.

German officials have announced they are adding 350 more soldiers to the 500 that lead a NATO force in Lithuania. Ukrainian leaders have asked them to supply weapons too. Scholz has not responded.

Russians Advance On Bakhmut As Allies Mull Jets For Ukraine By Agencies 15 hours, 4 minutes ago

Ukrainian Soldiers Arrive In Britain For Tank Training By Agencies 2 days, 15 hours ago