We Wish We Do Not Vave To Show The Red Card To Any Political Parties: Chief Election Commissioner Dinesh Thapaliya

We Wish We Do Not Vave To Show The Red Card To Any Political Parties: Chief Election Commissioner Dinesh Thapaliya 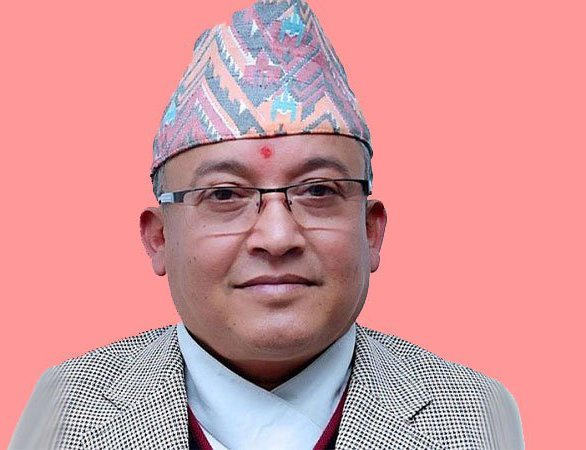 Today is very important day in the history of Nepal as we are also celebrating Elections Commission Day. I would like to remind all political parties and candidates vying in the upcoming local level election comply with the election code of conduct. The local level election is slated for May 13 this year in a single phase. The reprimand and punishment for violation of the election code of conduct would be severe. The political parties and candidates come to ground the contest like the players come to the ground to play the football.

The Commission plays the role of the referee and the commission should be a watchdog if the political parties and candidates contesting the poll flout the rules and regulations.

There are over 250,000 election observers for the upcoming election. We wish we do not have to show the red card to any political parties and candidates vying the contest for flouting the code of conduct. I suggest employees of Commission and subordinate bodies to carry out activities taking the preparation of the election as an opportunity

The government has announced the dates of the local level elections for May 13 this year in consultation with the Election Commission of Nepal (ECN). So with the mentality of conducting elections on the stipulated date we have launched preparations at various levels. We are finalising the voter list, formulating election policy, working procedure and guidelines and approving them, finalising budget with the consent from the Ministry of Finance, and conducting meetings with the development partners and other agencies for monitoring and foreign support. Meanwhile, the ECN is studying the applications received to register political parties. Registration of new parties will be concluded before the local level elections. Management of resource and equipment including vehicles for the elections are also in the priority. ECN is working as per the approved work schedule.

The biggest challenge for us is to educate the voters through the modal ballot paper with the list of symbols for the total candidates in each local body so that they could be sensitised on casting their votes properly. There is a need to create 6743 types of ballot papers for each ward across the country and send them to all local levels. It can be done in the final 15 days before the election day. So, we are highly sensitive on this matter. In the previous election, ECN has printed 70 ballot papers in six different design and sent them to the local levels.

Election should be held with greater political consensus but political parties in the country don't have the same perspective on the election. Coordination with all political parties and other stakeholders will be enhanced in the days to come. ECN is ready to face these challenges and move ahead with the required preparations to make the polls successful. As per the international practice, 120 days are needed to hold national elections successfully. But elections can be organised in three months since the date of announcements, we are making preparations for the same.

It is cost effective since there is uniformity in promotion, advertisement, sample ballot paper, documents, trainings and orientations. If we organise it in single phase, election in a place doesn't affect polls in another location. Likewise, it is not easy to store the ballot boxes safely until the second phase of elections if they were held in multiple phases. ECN has always been advocating for single phase polls for all elections. However, it increases burden for the election management body while mobilisation of security forces would also be challenging since every unit across the country need security. But as per our assessment, there isn't any security threat for elections.

The Commission is formulating a guideline for the management of human resources (HR) for the upcoming elections. There will be a need of 753 election officers for each local body, 753 assistant election officers and about 9 staff in every election office. About 23,500 polling centres would be needed according to the present voters' number. This means if we deploy just 5 staff at a centre, 120,000 staff are needed, however this HR is needed for the final seven days. We are planning to utilise the HR available at the local level. Existing government staff and teachers of community schools in each local body could be enough to address the need for HR for the polls.

The greatest support in the elections will be coming from the federal government. It will support us with human resources, technology, security and budget. The ECN designs programmes and activities in close coordination with the line ministry. Local governments can help us in establishing well-facilitated as well as disabled-and-senior-citizen friendly polling stations, running election education and awareness, employee and technical equipment. They can check the activities run to influence the voters. Provinces can support ECN's office in each province with physical facilities, HR and documents.

ECN is preparing a new election code of conduct on the basis of its experiences in the previous polls. It is prepared with the consultations from all stakeholders, including media reports, and will be approved within a week from now. Implementation of this code of conduct will be ensured in cooperation with all political parties by the election officers in each local body. The new code of conduct has a provision that the monitoring of the polls will be conducted by the Election Offices set up at the respective local bodies. The monitoring will be conducted by a team including the representatives from the political parties contesting the polls. Independent monitoring will be conducted in some of the risk-prone areas. We are in discussion with various agencies like National Human Rights Commission, General Election Observation Committee, National Election Observation Committee and Transparency International to map such areas. ECN has also formulated new procedures for the election observers. Likewise, we are planning to install CCTV cameras in all polling stations to monitor the election day activities.

So far as the expenditure by the government in election concerned, it is modest with around Rs. 7 per capita cost. Per capita cost in elections is gradually going down in Nepal. The ECN, security agencies, party and candidates are the major mobilisers of resources during the polls. But the concerns are for the party and candidates for their haphazard expenditure. They pour in a large sum of money in the elections and create a fuss against it. People are sovereign. Is that sovereignty a commodity which could be bought or sold? If yes, this is unfortunate. It would only harm the health of democracy. Until and unless the parties and candidates don't understand the spirit of election and democracy, much can't be done in this regard.

To check such acts, we have changed the design of vote counting places in the recent elections. We are in the process to hold step-wise discussions with the election observation agencies. Strong legal actions and punishment will be taken against perpetrators.

Current law maintains that to cast a vote in elections, Nepali citizen should have their name in voters' list. But it doesn't allow to install a polling booth outside the boundary of the country. Therefore, those who have their name in the voters list can cast their votes from their respective polling stations in the country. However, the ECN will formulate a law with a provision to facilitate Nepalis in foreign countries to vote in elections in their home country. It has recently obtained the agreement in principle from the government to create an integrated law for all polls.

If voters' registration is kept open for the period after the announcement of the elections, there could be malpractices to shift voters from one constituency or local level to another. The ECN needs about 40 days to update the voters' details, so if we open registration now, elections can't be held in time. If anyone is left to get registered, they should understand this complexity and get their names listed as voters after the local level elections so that they could cast their votes in subsequent polls.

To reduce number of vote cancellation, digital communication campaign would be launched. Notices and reminders would be sent to the mobile numbers of voters on the day of polls while social media and online media will be used extensively. We are mulling a new concept on voters' awareness, to educate them at the polling station before casting their votes by setting up a help desk and mobilising two educators at each station. Such education will be conducted in local language, if needed. It is cost effective and will have full coverage.

The commission is for the use of EVM to reduce the cost and complexity in the polls. It will use the machines developed by youth scientists – Ram and Laxman – after proving their accuracy and authenticity. If the economic resources allowed and voters could be made ready to use the machine, the ECN is planning to use EVMs in six metropolitan cities and municipalities in the Kathmandu Valley in the upcoming local elections. A team led by joint secretary (technical) at the Ministry of Communication and Information Technology is studying the prospects for the use of EVM in the local level polls. We will implement their recommendations as per the consensus among the political parties.

Malaysian Home Minister In Nepal By Agencies 2 days, 13 hours ago