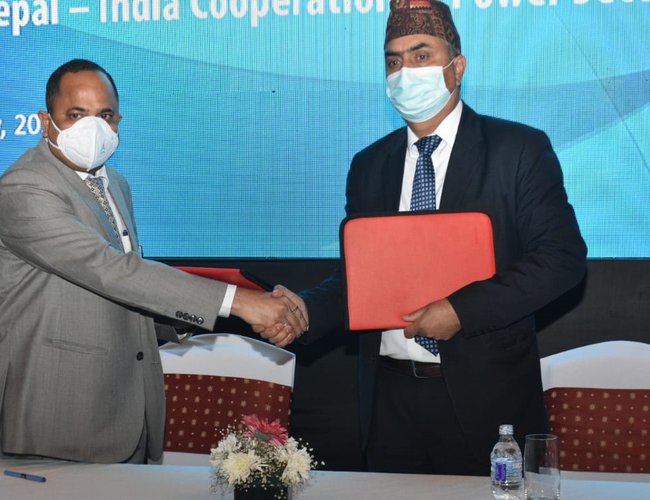 With the surplus of electricity at hand during the rainy season, Nepal has been desperately requesting India to allow the sale of Nepalese surplus electricity in Indian market. Although India has not made any verbal or written commitment, the officials have indicated that they will consider Nepal’s request.

Despite the efforts of expansion of electricity supply and encouraging households to use electricity for cooking, Nepal does not have capacity to consume over 1000 MW of surplus electricity during the five months period of lean season. Given Nepal’s geographical proximity and grid connection, only Indian market can save Nepal. For this, India needs to give a green signal to power traders in India.

Nepal and India agree to constitute a Joint Hydro Development Committee (JHDC) to further explore the development of viable hydropower projects in Nepal with particular focus on storage projects.

During the JSC and JWG meetings, the two sides reaffirmed that power sector cooperation is a strong pillar of India Nepal partnership and agreed to pursue it along the following axes: joint development of generation projects in Nepal, joint development of cross-border power transmission infrastructure, power trade under respective domestic regulations and policy framework, and capacity building assistance.

Indian side thanked the Nepali side for their warm welcome and hospitality in Kathmandu and briefed the Nepali side on recent developments in India's power sector scenario, including installation of a large renewable energy capacity and the achievement of “One Nation, One Grid, One Market”. Nepali side briefed the Indian side on the recent developments and future trends in power generation, transmission and demand scenario in Nepal.

The Indian side also acknowledged the recent enhancement in the installed power generation capacity in Nepal which paves the way for stronger and mutually beneficial cooperation in the power sector. The two sides also agreed to constitute a Joint Hydro Development Committee (JHDC) to further explore the development of viable hydropower projects in Nepal with particular focus on storage projects.

The two sides decided to continue the discussions on the subject towards expeditious follow-up and agreed to meet soon for the next sessions of the JSC/JWG meetings to be hosted by the Indian side.

Although negotiation is always a long and time consuming process, the recent gestures shown by Indian officials during the meeting is a positive indication for Nepal.