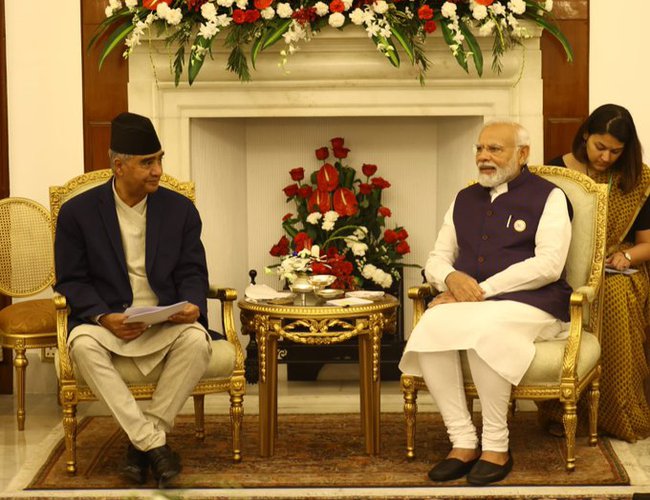 Prime Minister Sher Bahadur Deuba, who is on a three-day visit to India, has said that he requested Indian Prime Minister Narendra Modi to solve the border issue through a bilateral mechanism reports The Rising Nepal.

Addressing a press conference at Hyderabad House in New Delhi on Saturday, Prime Minister Deuba said that he had held discussions with his counterpart Narendra Modi to resolve the border dispute between Nepal and India through a bilateral mechanism.

"We discussed the border issue. And I urge PM Modi to resolve this issue through a bilateral mechanism." He said in the press conference.

Four agreements have been signed between Nepal and India at Hyderabad House in New Delhi on Saturday during the three-day visit of Prime Minister Sher Bahadur Deuba to India.

The agreements were signed between the delegations of the two countries in the presence of Prime Minister Deuba and Indian Prime Minister Narendra Modi at Hyderabad House.

Nepal and India have signed an agreement on the International Solar Alliance, technical assistance related to railways, supply of petroleum products and exchange of technology transfer between Nepal Oil Corporation and Indian Oil Corporation.