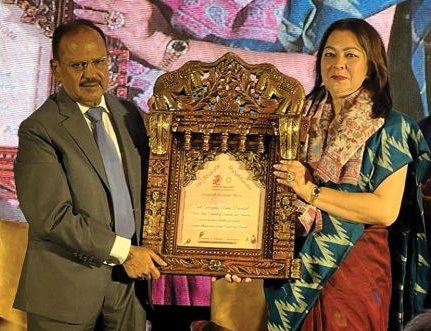 President of Nepal-India Chamber of Commerce and Industry (NICCI) Shreejana Rana has been honoured with Draupadi Samman Patra 2022 in New Delhi of India.

According to a press release issued by NICCI, the honour was conferred on her at a program in New Delhi by Ajit Doval, Chief Security Advisor to Indian Government on Friday, 20 May.

Draupadi Dream Trust has honoured Rana, as the President of NICCI, for her contribution in Nepal-India bilateral relation through development and promotion of religious and spiritual tourism in both the nations, the binational chamber said in a statement on Sunday.

The Trust is the institution working in the area of ancient eastern civilization, art, culture, religion and history, and publication of such area for a long time.

Rana has also played an important role in publishing a book and dedicated website on Nepal-India religious/spiritual circuits which cover Buddhist Circuit, Mahabharat Circuit, Ramayan Circuit, Shiva-Shakti Circuit and Sikh Circuit aiming to promote pilgrimage tourism in both the countries.