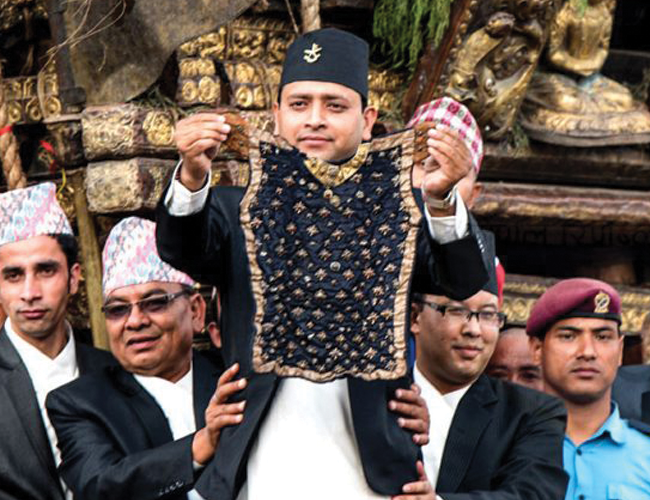 The jewel-adorned vest kept in the custody of Lord Rato Machhindranath will be shown to the public on Saturday amidst an annual ritual of Bhoto Jatra at Jawalakhel, Lalitpur.

The vest will be displayed at around 5:00 pm in the presence of President Bidya Devi Bhandari, Vice-President Nandra Bahadur Pun, Prime Minister Sher Bahadur Deuba, political leaders, national and international dignitaries and chiefs of security agencies, among other officials, informed Hari Prasad Subedi, chief of the Guthi Sansthan of Lalitpur. The living goddess Kumari of Patan also observes the festival.

As per the tradition, Bhoto Jatra is celebrated on the fourth day of the arrival of the chariots of Rato Machhindranath and Minnath at Jawalakhel.

According to the myth, the King of the snakes- Nagaraj was wondering here and to search the medicine and treatment of His wife's illness of the eyes. He was transferred as a human and walking throughout the field. He saw a farmer ploughing the field and thought that he was the person that could cure his wife. He asked are you the person who can cure the diseases? Poor farmer did not know what to say, and in hurriness, he said yes. Then Nagaraj came into his real form and asked that he want to take him to his place to cure his wife. The farmer came in the real trouble. Finally, we went to the place of Nagaraj.

The farmer did not know how to cure the illness of the Nagaraj's wife's eye problem. So he pretended to applying his Mantras and took out some of the stuffs from the back side of his ear and gave it to his wife saying that do the medicare twice a day in the eyes. Miraculously, after some days, the illness was gone. Nagaraj became so happy and asked the farmer what he wants. The farmer loved the Bhoto (a piece of cloth) that Nagaraj was wearing full of diamonds and asked that one. Nagaraj offered it without a delay.

Now, the farmer started to roam around with the same Bhoto. He was working in the field by taking off the Bhoto and at the time, one monster named Lakhe stole it and ran away. The farmer after the work, searched his Bhoto but could not found and came back home in a depressed mode.

Time passed. One day, the farmer went to explore the Machhindranath festival (Jatra) to Jawalakhel. Coinsidentally, the Lakhe monster who had stolen his Bhoto, was also there in it. In angry mode, the farmer went near to the monster and asked the Bhoto. Even the monster refused to give the Bhoto claiming it to be his own. There was a huge debate and it went to the King. The king asked who belongs to that Bhoto. Finally, both of them offered good claims that could not be declared.

During this festival, the head of the state (president) come and display the Bhoto every year.

A designated government official holds up the vest from the chariot of Rato Machhindranath and shows it to the people in all four directions.

According to folklore, the gem-encrusted traditional vest once belonged to a serpent king who gifted it to a farmer after the latter cured his wife of an ailment. The farmer valued this vest greatly and wore it everywhere.

Once, when he was working in his field, he took it off to prevent it from getting dirty. He hung it up on a nearby tree from where a goblin stole it. Months later, that goblin came to worship Machhindranath where the farmer saw him and recognised his vest. They both claimed ownership of it and agreed to keep it in Machhindranath’s possession until they could provide evidence of their claim.

Some historians say that the Bhoto Jatra was added as a part of the Machhindranath Jatra by the god’s devout follower King Narendra Deva in 879 AD.

This year, the two chariots reached all their destinations smoothly without any obstructions. “This enabled the community organisations to hold the Bhoto Jatra on Saturday,” Subedi said.

After the ceremony, the scarlet idol of Machhindranath is taken to Bungamati where it resides half the year.

he 1600 years old Rato Machhindranath Jatra (Festival) is a festival celebrated in dedication to the Lord of the Rain in the Kathmandu valley. It is the most ancient Jatra in Nepal and taken as one of the One of the most significant festivals in Patan. During this festival, the chariot will be pulled once it is constructed to the major deities in the valley and taken to the open space of the Jawalakhel of Lalitpur and the Bhoto Show Jatra is organized as a concluding part. It is celebrated in Patan, but the popularity is increasing and it has become a Jatra of all the devotees and people around the globe.

The 32 feet high Rato Machhindranath Chariot is pulled in Patan with a plead of the rain to fight with a drought. The chariot is made out of a bamboo and wood and the Lord Macchindranath's statue is placed in the chariot. The chariot is pulled throughout the town- Patan, with a route of Natole, Gabahal, Mangal Bazaar, Sundhara, Lagankhel, Kumaripati and ends in Jawalakhel with a Bhoto Jatra. Machhindranath is worshipped as a God of rain, who was brought from Assam of India after the valley suffered from the drought. This festival concludes with a Bhoto Jatra Festival, where the Bhoto (cloth) is displayed in Jawalakhel by the head of the state of Nepal.