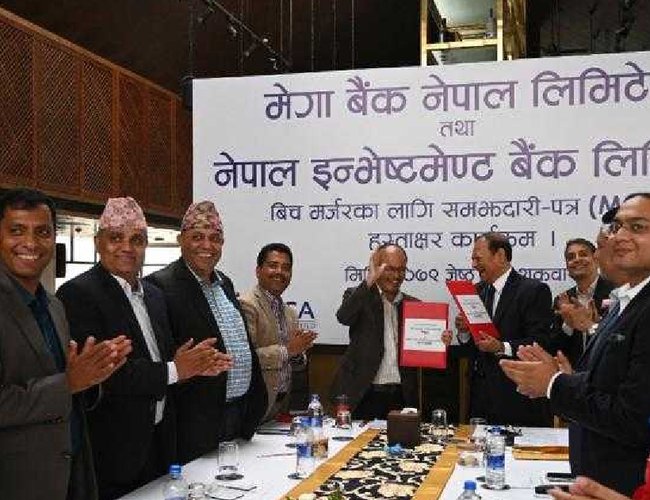 Nepal Investment Bank Ltd and Mega Bank Nepal have initiated the process of going for merger to create a banking behemoth with a total paid-up capital of Rs 34.43 billion.

Prithvi Bahadur Pandé will be the chairperson, while Jyoti Pandey will be the chief executive of the merged entity, which will be named 'Nepal Investment Mega Bank Ltd'.

The paid-up capital of NIBL currently stands at Rs 18.30 billion, while that of Mega Bank Nepal is Rs 16.12 billion.

The share swap ratio for NIBL and Mega Bank has been set at 100:90.

Earlier, NIBL had inked an MoU for merger with Himalayan Bank. However, the planned merger fell through when the annual general meeting of the HBL rejected the plan.

The due diligence audit had suggested a swap ratio of 1:1 for the merger between NIBL and HBL.

The actualisation of the merger would have made it the biggest commercial bank in the history of the Nepali banking industry in terms of paid-up capital of Rs 26.94 billion. The institutions would have operated jointly under the name of 'Himalayan and Nepal Investment Bank Ltd'.

Preliminary, the swap ratio for NIB and MEGA is said to be 100:90, implying that the number of MEGA shareholders will decrease by 10%.

For example, if a shareholder of Mega Bank had 100 shares then his shares would be reduced to 90 shares in the newly merged company. However, the shares of NIB shareholders would remain unchanged in the new company.

As a result, secondary market trading of both NIB and Mega Bank will be suspended in the NEPSE from coming Monday i.e. from Jestha 30, 2079, onwards.

The Chairman and the CEO of the merged entity will be Mr. Prithvi Bahadur Pande and Jyoti Prakash Pandey, according to the agreement. The name of the newly combined company is stated to be Nepal Investment Mega Bank Limited.

The total deposits gathered from customers after the merger will be Rs. 3.27 Kharba, beating the deposits acquired by Nabil Bank following the acquisition of Nepal Bangladesh Bank (NBB), which are anticipated to be Rs. 3.17 Kharba. Similarly, according to the Q3 reports, these two banks would forward Rs. 3.12 Kharba in loans after the merger.

The merger between these two banks will no doubt result in a wider network to support business growth.

Immediately after the joint operation, there will be 295 branches. The bank will also have 271 ATM terminals, 46 extension counters and and 118 branchless banking points. Also, there will be 10 revenue collection counters of the bank.

Following the merger, there is no doubt that the business and profitability will expand. Upon the merger, the bank will have highest paid up capital, deposits, loans and advances. The total number of A Class banks will come down to 25.

NADA Demands To Allow Import Of All Vehicles And Concessional Loans By NEW SPOTLIGHT ONLINE 1 day, 7 hours ago

MCC-Nepal Issued An Tender For The Construction Of a Transmission Line By Agencies 5 days, 8 hours ago