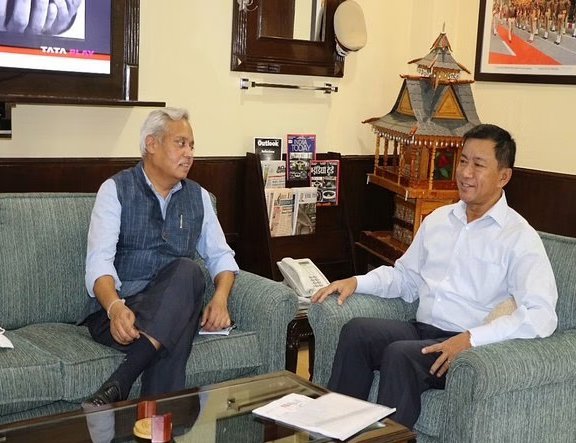 The 1993-batch Indian Foreign Service officer, Srivastava, currently Additional Secretary in the Ministry of External Affairs, discussed the deployment and working of Sashastra Seema Bal along the India-Nepal border with Thaosen, said the force in a statement.

Srivastava held the discussion during his visit to the SSB Headquarters.

As Srivastava is expected to take up the assignment shortly, he took a meeting with other senior officers of the force too. The other officers who took part in the meeting included B. Radhika, Additional Director General and PK Gupta, Inspector General (Operations).

Last month, India announced the appointment of Srivastava as the next ambassador to Nepal.

Srivastava, who headed the East Asia Division in the Ministry, has played a key role in diplomatic and military talks with China to tackle the military standoff on the Line of Actual Control (LAC) since 2020.

Srivastava will succeed Vinay Kwatra, who became the foreign secretary last month, as the envoy to Kathmandu.

The East Asia division deals with China, Japan, North Korea, South Korea and Mongolia; and Srivastava is seen as an experienced China hand. This experience is expected to come in handy for his stint in Kathmandu in view of China’s stepped up efforts to increase its influence in Nepal’s politics and economy.

Besides leading the Indian side at meetings of the Working Mechanism for Consultation and Coordination (WMCC) on border affairs, Srivastava participated in meetings of Indian and Chinese military commanders to address the standoff on the LAC. He has also served as consul general in Shanghai. (ANI)

This report is auto-generated from ANI news service.