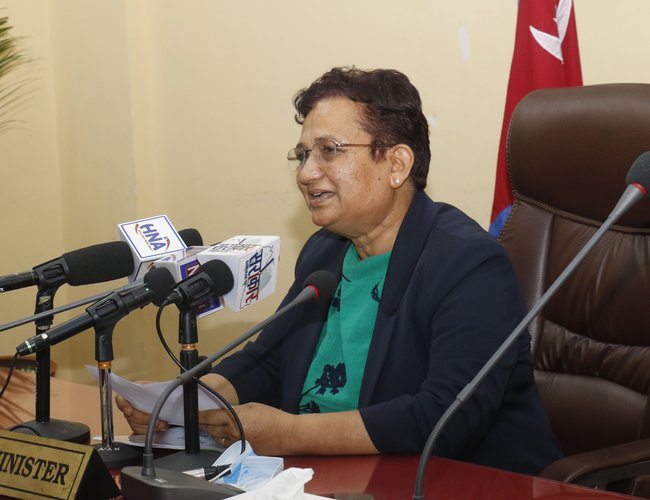 Minister for Energy, Water Resources and Irrigation, Pampha Bhusal, has said that the government is conducting a campaign under the slogan 'Let Us Abandon Foreign LPG, Use Domestic Electricity' with the objective of gradually replacing the use of LPG with electric cooking stoves.

This campaign is in the process of success.

She said this in a session of the National Assembly, the Upper House of the Federal Parliament, today while replying to queries by lawmakers during discussions on the topic related to her ministry in the Appropriation Bill, 2079 BS.

On the occasion, Minister Bhusal stressed that the energy, water resources and irrigation sectors have a special role to play in the country's overall development.

She informed the Upper House that works were being carried out with the goal of preparing a plan and implementing it to provide reliable and quality electricity services to all citizens within the next two years.

In this connection, Minister Bhusal mentioned that around 2.6 million indigent customers of the about 5.2 million customers throughout the country were benefiting from the policy of providing free electricity to such customers consuming a maximum of 20 units of electricity in a month.

The tariff for electricity used in irrigation has been determined at two rupees per unit in line with the policy of providing up to 75 per cent concession in electricity for irrigation, she added.

The Minister for Energy further said that the household electricity tariff has been decreased for encouraging the use of electric ovens.

Likewise, she said the demand fees have been removed for drinking water and irrigation. According to her, the energy tariff toward drinking water has been reduced approximately by 50 per cent.

"The electricity tariff has been decreased by 20 per cent two times in the past two years when the prices of most of the goods and services are increasing," said Energy Minister Bhusal.

Budhigandaki Hydroelectricity Project to be built in the company model

The Energy, Water Resources and Irrigation Minister informed that the 1,200 megawatts capacity Budhigandaki Hydroelectricity Project is to be moved ahead in the 'company model'.

Minister Bhusal stated that the distribution of compensation for houses and sheds on the land acquired for the project was in progress. She added that the process for construction of the project would be started next fiscal year by establishing a company for developing this national pride project by Nepal itself.

She mentioned that special priority has been given to the construction of sub-station, transmission and distribution lines for providing quality electrical services as per the policy of using energy for a bright future using the electric equipment and expanding drinking water with the use of lifting, developing agriculture through irrigation and operation of transport and industrialization by using electricity.

Full electrification in three provinces by next year

Minister Bhusal said that works are being carried out to have full electrification in Madhes, Bagmati, Gandaki and Lumbini provinces in the coming year itself.

She added that full electrification would be carried out in Province no 1, Karnali and Sudurpaschim provinces within the next two years by concluding a multi-year contract for the expansion of the distribution system in these provinces.

Minister Bhusal underscored that the budget has been allocated to prioritizing rural electrification and renewable energy development in the next fiscal year.