We Are At An Important Juncture In Our Relationship With Nepal: Dean R Thompson, US Ambassador Nominee For Nepal 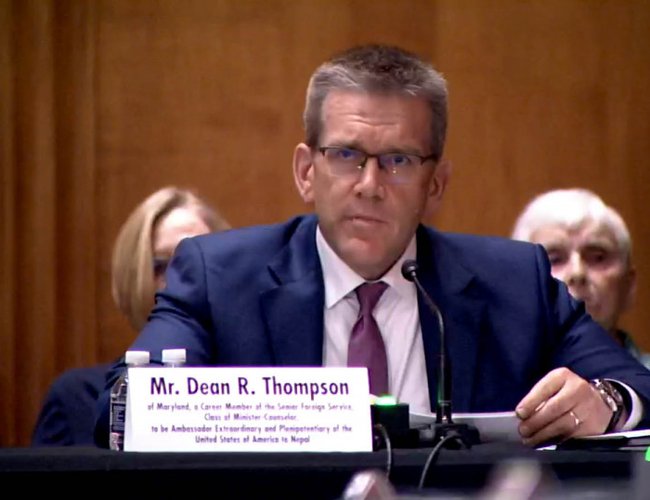 Dean R Thompson, the United States ambassador nominee for Nepal, has said he is well prepared to take up his assignment in Kathmandu.

In his opening statement before the Foreign Relations Committee of the Senate on Wednesday, Thompson said: “from my time as Principal Deputy Assistant Secretary in the South and Central Asian Affairs Bureau, as a US diplomat in Bangladesh, Sri Lanka, and India, and a leader in the Department’s crisis management apparatus, I feel well prepared to serve in this capacity, if confirmed.”

Thompson was nominated as the US ambassador to Nepal by President Joe Biden in March.

In his statement he said if gets confirmed for the position, he will push for the rights of all Nepali citizens and residents. “This includes the Dalits, marginalized communities, and refugee communities, including Tibetan refugees. I will encourage the Government of Nepal to implement policies that promote meaningful inclusion, economic opportunity, and humanitarian support,” he said as per the statement released by the Foreign Relations Committee.

If confirmed, he will succeed Randy Berry in Kathmandu, who has been nominated by Biden as his ambassador for Namibia.

Berry had presented his letter of credence to President Bidya Devi Bhandari on October 25, 2018.

Thompson also said facilitating Nepal’s economic growth and strengthening the trade ties between the two countries will be his priority if gets appointed.

He also mentioned parliamentary ratification of Millennium Challenge Corporation Nepal Compact in February, saying it got through Nepal’s parliament despite a torrid disinformation campaign by PRC (China).

“We are at an important juncture in our relationship with Nepal. Nepal has been referred to as a ‘yam between two stones,’ those stones being China and India,” he said. “While those countries do have important relationships with Nepal, we also share Nepal’s interest in strengthening its sovereignty and its partnership with the United States.”

“Nepal’s progress on the commitments it made during President Biden’s Summit for Democracy demonstrates how important Nepal’s young democracy is to its people, and the importance it places on its relationship to the United States,” he added. “Nepal’s support for Ukraine resolutions at the UN General Assembly and the UN Human Rights Council demonstrates its dedication to the international rules-based order and the premise of territorial integrity. Nepal is a committed bilateral partner and a committed partner on the world stage.”

Incredible Opportunity To Visit Patan Durbar Square In Nepal: US Under Secretary Nuland By NEW SPOTLIGHT ONLINE 1 day, 8 hours ago