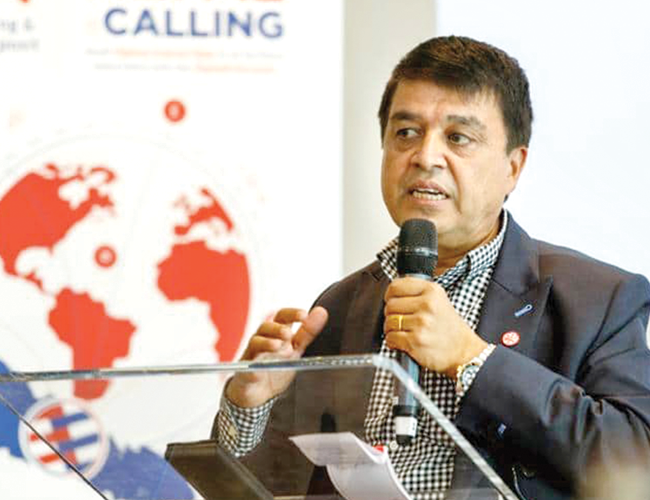 Senior vice President of Federation of Nepalese Chambers of Commerce and Industry and Chairman of Global IME Bank Chandra Prasad Dhakal urged non-resident Nepalis to open accounts in Nepali banks in foreign currency to bring foreign currency into the country and to invest in tourism infrastructure and hydropower projects.

According to a press statement of Global IME Bank, Dhakal said that compared to many other countries, investment potentials are high in Nepal and the returns are also good.

The hydroelectric project built in Lamjung district in collaboration with NRNs is nearing completion, while two hydroelectric projects are being constructed on Kaligandaki River in Myagdi district," he said. "You should also increase your investment in Nepal. Help the state too.”

He said that the Nepal Rastra Bank has introduced a provision to open foreign currency accounts in Nepali Bank in view of the shortfall in foreign currency reserves, and urged non-resident Nepalese associations and all Nepalis to help in this.

"On the other hand, if the money deposited abroad without interest in a bank here in Nepal is deposited in a foreign currency in a Nepali bank, then interest will also be earned on it. There is a facility to bring money back from Nepal when necessary. It has the facility that people here can spend abroad through visa card and master card and invest in Nepal according to their needs or family members can withdraw the savings in Nepali rupees in Nepal," he said.

He said that all Nepalis should play a role to avert the crisis in the country's economy and free the country from further economic crisis.

"For this, you had to open an account in Nepali Bank in foreign currency. More foreign investment should be facilitated in Nepal," he said.

In the programme organised by the foreign representative office of Global IME Bank in London, the policy introduced by the Nepal Rastra Bank (NRB) to facilitate opening foreign currency accounts in the Nepali banks targeting the Nepalis living abroad was briefed.

Roshan Khanal, DCM of the Nepali Embassy in UK, said that the role of NRNs is important in saving the economy of the country and in the development of the country.

He also urged NRNs to bring in foreign investment in Nepal and increase tourists.