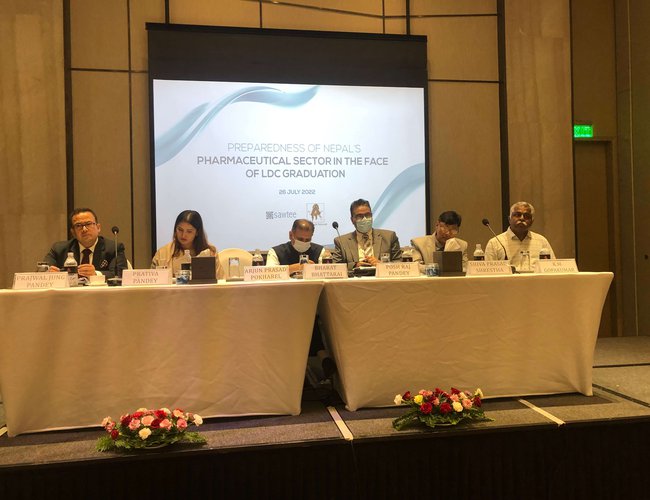 Experts discussed the challenges faced by the Nepali pharmaceutical industry in the context of the new intellectual property regime after Nepal’s graduation from the least-developed country (LDC) status in an interaction organized today in Kathmandu.

They identified the major policy and institutional challenges for the optimal use of Trade-Related Aspects on Intellectual Property Rights (TRIPS) flexibilities and suggested way forward during the workshop titled “Preparedness of Nepal’s pharmaceutical sector in the face of LDC graduation” organized by South Asia Watch on Trade, Economics and Environment (SAWTEE) and Third World Network (TWN).

Opening the program, Dr. Paras Kharel, Executive Director, SAWTEE began by emphasizing the flexibilities that Nepal receives as an LDC and the preparedness of the pharmaceutical sector for the challenges it may encounter after 2026.

Dr. Posh Raj Pandey, Chairperson, SAWTEE, presented the findings of the draft report “Preparedness of Nepal’s Pharmaceutical sector to cope with the challenges of the country’s LDC graduation” jointly prepared by SAWTEE and TWN.

Dr. Pandey suggested that Nepal could still avail different flexibilities even after graduation, immediately during the transition phase and later as a developing country too while strengthening the capacity of domestic pharmaceutical manufacturers.

Prajwal Jung Pandey, President, of the Association of Pharmaceutical Producers of Nepal (APPON), stated that the patent registration process for pharmaceutical companies in Nepal is complex and cumbersome. Pandey mentioned that Nepal has not been able to effectively grab the benefits provided to LDCs.

He emphasized that in the face of LDC graduation, the private sectors, along with the government, need to move ahead in a collaborative manner to ensure that transition is smooth.

Dr. Prativa Pandey, Executive Committee Member, Intellectual Property Protection Society Nepal (IPPSON), stressed that gaps lie in the ecosystem, innovation and standards. She emphasized that the research and development (R&D) ecosystem should be strengthened. Dr. Pandey said, “As a civil society we need to increase the capacity of the government in strengthening R&D.”

K.M. Gopakumar, Senior Research and Legal Advisor, TWN, emphasized that an apt policy response is needed to minimize the impacts of LDC graduation on domestic producers and to ensure access to medicine in an affordable way. While the draft law on intellectual property is generally in the right direction, there are room for improvement. For instance, the bill could decrease the scope of patentability by disallowing multiple patents in a single molecule, expanding provisions related to compulsory licensing, and by introducing a transition period before the product patents are implemented. Likewise, he highlighted the roles that government could play in strengthening the pharmaceutical sector, for instance by providing incentives such as tax breaks in the use of IP flexibilities, favoring domestic producers in procurement policy, providing R&D funds, and by ensuring that patents apply only to inventions, and not to discoveries. 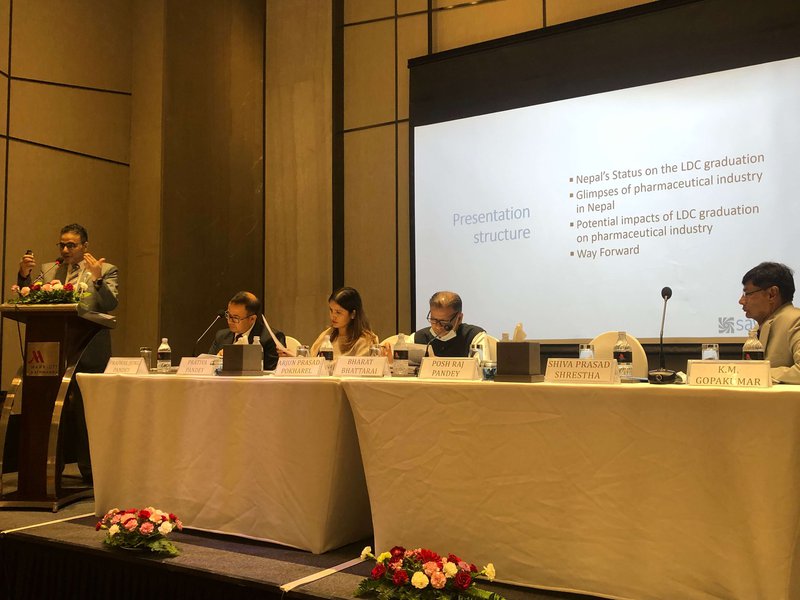 In the closing remarks, Mr. Bharat Bhattarai, Director General, Department of Drug Administration, stated that the government has acknowledged the need for policy reforms in the pharmaceutical sector and the findings of the study have been successful in providing robust policy recommendations. Bhattarai stressed that a holistic approach is needed among stakeholders to invigorate the pharmaceutical sector.

The workshop was attended by policymakers, experts from the pharmaceutical sector, medical professionals, representatives from academia, activists and civil societies. 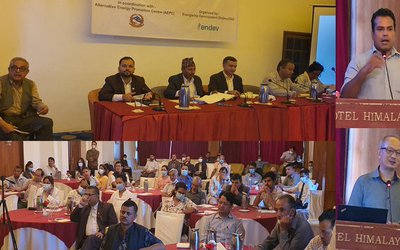