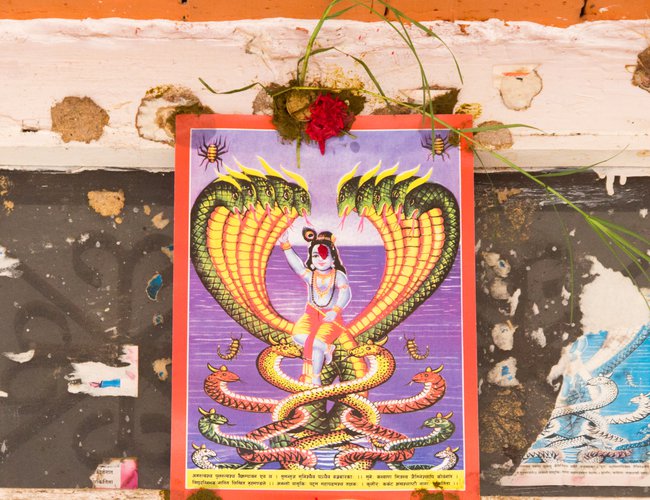 Nag Panchami is observed on Shrawan Shukla Paksha Panchami during Sawan month. Usually, Nag Panchami day falls on the second week or the last week of the month of Shrawan July/August. This year Nagpanchmi is on August 2.

Nepali people worship snake gods, also called the Nagas during Nag Panchami. In ancient times, Nagas halted rain from pouring over Nepal. The king of that time also happened to be a Tantric and so he used his power to make Nagas let go of rain. The king succeeded in doing so but he also honored the majestic power of Nagas by turning the day of victory into a festive occasion of Nag Panchami. On Nag Panchami, devotees put a picture of Naga high above their doorway and perform puja with necessary puja items. Offerings in the form of food are left in the yards and paddies for snakes. Naga temples in the valley at Nagpokhari, Taudaha and Nagdaha are thronged with devotees on this day.

During Nagpanchami people wake up early in the morning and take bath with precious water then make images of the serpent /Nag, Ganesh, and Kalash with cow dunk or white flour and worship. It is customary to visit serenely Naga’s, Pound, well and Shiva temple and worship Serpent offering cow milk, sesame, barley, Doobo and Kush (sacred grass) and burning Shrikhand (sandalwood) incense. It is said that the aroma of Shrikhand is the dearest thing of Nagadevata/Serpent. If we go to the nearby tree of Shrikhand, be too careful with the serpent.

Similarly, in this Puja (worship), there is a law to use white lotus flowers and Lava (parched paddy that is grown in the flower). Likewise, people draw the picture of Serpents and past on main entrance of the house/door, offer Yogurt, Dubo, Kush, Sindur (a traditional vermilion red or orange-red colored cosmetic powder), Chandan, etc. for worship. People believe that there is no lighting in the house, no fear of firing and snakes and other poisonous species from the worship of Nag on this day. This day is believed to have started the winter with the end of the rainy season.

Women worship Nag Devta and offer milk to snakes on this day. Women also pray for the wellness of their brothers and family.

Nag Panchami is a traditional worship of serpent Gods observed by Hindus throughout Nepal and India.

Nag Panchami is one of those significant days and it was observed on Shukla Paksha Panchami during Shravana month.

It is believed that any Puja offered to snakes would reach the serpent Gods. Hence people worship live snakes on the day as representative of serpent Gods who are revered and worshipped in Hinduism. Although there are several serpent Gods, the following twelve are worshipped during Nag Panchami Puja

Nepalese people have great respect for Nagapanchami Day which falls every year on the fifth day of the bright fortnight of Shravan (July) / Shravan Shukla Panchami. This year Nagpanchami falls on 02 th-August. People celebrate this day with great feelings and faith of the eight Gotra (clan) of the Nagas, namely; Ananta, Basuki, Padma, Mahapadam, Taksar, Kulir, Karkat, and Shank Nag.