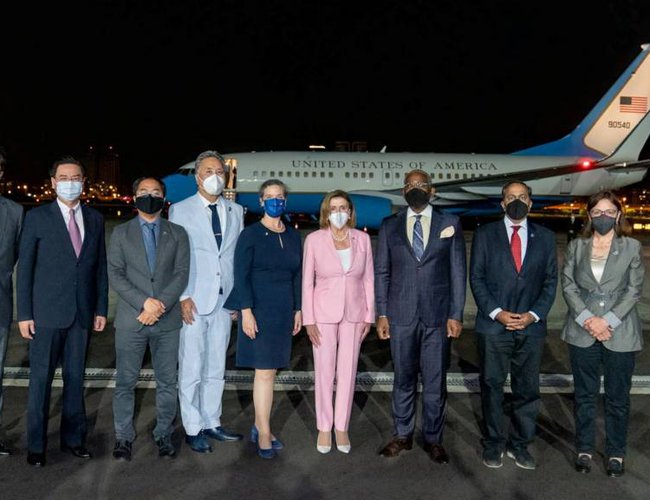 The US House Speaker has arrived in Taiwan demonstrating an "unwavering commitment to support." Nancy Pelosi's visit is the highest-level trip by a US official in a quarter century. However, Chinese officials immediately reacted with a backlash.

Pelosi landed in Taipei on Tuesday night. She is on an Asian tour that includes announced visits to Singapore, Malaysia, South Korea, and Japan.

Taiwan's presidential office said Pelosi is set to meet President Tsai Ing-wen on Wednesday and will have lunch with her. Pelosi says in a statement that discussions "will focus on reaffirming support and promoting shared interests."

Moments after Pelosi landed in Taipei, The Washington Post released her opinion piece. She says the US must remember the vow "to support the defense of Taiwan."

She adds Beijing has dramatically intensified tensions with Taiwan and its democracy is "under threat."

US officials say she has the right to visit and that nothing has changed with their "one-China policy."

National Security Council spokesperson John Kirby said there is "no reason for China to take what is a perfectly legitimate and consistent travel by the Speaker of the House and turn it into some pretext for amping up the tensions, creating a sort of crisis or conflict."

Chinese officials have been warning against the visit. The foreign ministry released a statement shortly after, saying "it has a severe impact on the political foundation" of relations between China and the US.

And it says China "will take all necessary measures to resolutely safeguard its sovereignty and territorial integrity." China's state-run news agency says the Chinese military would conduct drills around the Taiwan Strait from Thursday.

People in Taiwan have a mix of reactions. Some pro-China groups took to the street to protest. Others gathered around the hotel Pelosi is staying at in a show of welcome.

Japan Marks 77 Years Since Atomic Bombing Of Nagasaki By Agencies 23 hours, 29 minutes ago