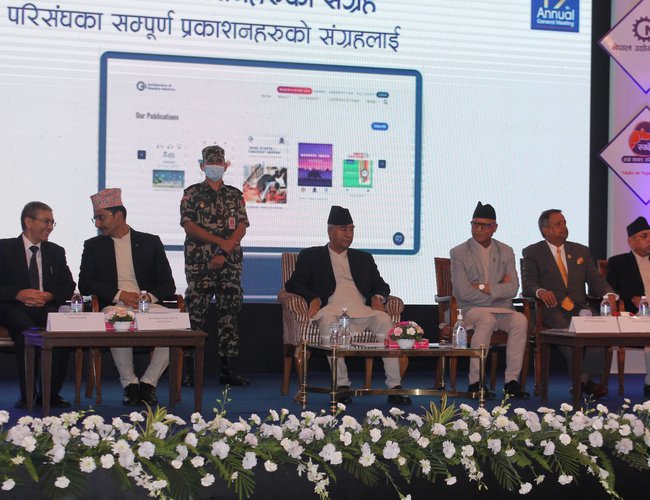 As Nepal’s foreign currency reserve is shrinking fast due to imports of luxury products like car, motorbikes and perfumes as well as essential products such as petroleum, food and so on, the option before the government is to issue an order to restrict all these imports.

Instead of announcing the decision, Prime Minister Sher Bahadur Deuba, who is facing General Elections in three months, has urged industrialists to reduce the import and consumption of petroleum products by increasing the use of electricity in industry and business.

“We are not in a position to lose foreign currency by importing unnecessary and luxurious goods," Deuba said. "We have to work to increase domestic production. The government is serious about preventing further deterioration of the economy and bringing it back on track."

"For strengthening the economy, I want to ask industrialists and businessmen not to import expensive and luxurious goods produced abroad only and to increase consumption, but to increase the production of goods and services that can be produced in the country and promote them, support import substitution, and focus investment in that area," said Prime Minister Deuba, addressing the 19th annual general meeting of the Confederation of Nepalese Industries. He said that both internal and external sectors of the economy are under pressure, he said.

For this, there is a need for both the government and the private sector to address the challenges of the economy by communicating and cooperating with each other, he said and added that the government is committed to solving the problems in the economy through a balanced budget and monetary policy.

Dominated by traders making money through importing luxury goods, Nepalese business communities find it difficult to swallow the pill of PM Deuba. As PM Deuba said that the country’s economy is facing a great pressure due to overwhelming import of goods and trade deficit pressuring on foreign currency reserves, a business delegation demanded to lift the restriction on import of cars.

Nepal's trade deficit swelled to a record of Rs. 1,720.41 billion in the last fiscal year driven by significant imports of petroleum products and low volume of exports.

According to the annual trade statistics published by the Department of Customs, the country’s trade deficit has increased by 23 per cent to Rs. 1,720.41 billion in the last fiscal year 2021/22.

At a time when Nepal’s import is rising, Nepal’s export trade has set a historic record in the last fiscal year. The country exported goods worth Rs. 200.03 billion during that period, a record-high export of Nepal so far.

Exports had crossed one hundred billion marks for the first time in the fiscal year 2020/21, reaching Rs. 141 billion. According to the statistics, Nepal’s export trade has increased by 41.47 per cent to Rs. 200.03 billion in the last fiscal year.

Even though exports went up significantly, the ratio of export to import is still 1:9.60. The share of export in the total foreign trade is only 9.43 per cent while that of import is at a whopping 90.57 per cent.

The statistics showed that the growth of export in soybean and palm oil significantly contributed to the achievement in export growth in the last fiscal year. 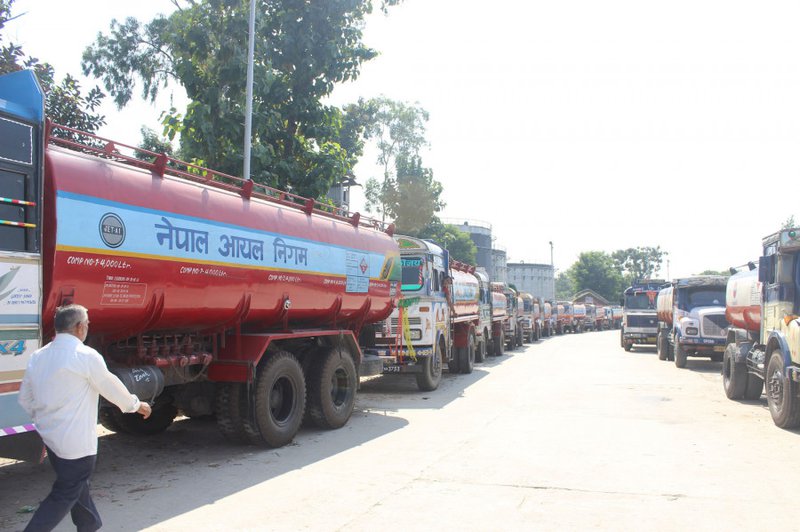 Nepal spent a big chunk of money to import Petroleum crossing Rs. 336 billion. Diesel is the most imported commodity in the last fiscal year. Diesel worth Rs. 168.23 billion had been imported during the period.

In the wake of rising stress on the balance of payment (BoP), a significant jump in the export and the ban imposed on imports of luxurious items seems to have helped.

At a time when the country is facing a severe economic crisis, Nepalese Parliamentarians, intellectuals and politicians are spending their time on non-issue of citizenship, elections and nitty-gritty personal political matters.

For now, it is the economy that is being adversely affected by political turbulence and mismanagement. The economy is far from being out of the critical ward. As Nepal’s currency pegged with Indian rupees, this helps to calm market sentiment. However, this is only temporarily given the swelling imports. Both volatility in global commodity and financial markets and political unpredictability at home is eroding confidence.

The rapidly declining value of the rupee against the dollar is the most worrying sign of that. The rupee has depreciated by 20pc in the past few months, adding to spiralling inflation.

Nepal Rastra Bank has pointed out that some of this depreciation is part of a global phenomenon due to the growing strength of the dollar. But other factors have also contributed over the months.

The country’s foreign exchange reserves are around $6.7bn, which cover less than six months of imports. As the reserve cushion has begun to erode so has confidence.

If reserves continue to dwindle, external capital injections prove inadequate or envisaged inflows don’t materialize, panic can take hold in markets even ahead of a cash flow crisis. Confidence can quickly evaporate over the perceived inability of the country to meet its financing requirements.

Along with restricting the import of luxury items and reducing the use of petroleum products, government spending must decrease. Every element of government expenditure shall require a critical review.

The government's spending on unproductive activities is better eliminated or substantially curtailed and the expenditure for new or early-stage large infrastructures is better deferred for an indefinite period until the economy navigates into sustainability.

The spending on social safety nets shall also need to be revisited and made more efficient. The government is in fact in the process of eliminating or minimising spending of lesser importance.

Unveiling the monetary policy, central bank governor Maha Prasad Adhikari announced that credit expansion to the private sector would be confined within 12.6 percent, a sharp reduction from the targeted 19 percent in the last fiscal year.

Likewise, the new monetary policy aims to limit the growth of money supply (cash, demand deposits, non-cash assets that are very liquid and that are easily convertible into cash) to 12 percent from the last fiscal year’s target of 18 percent. 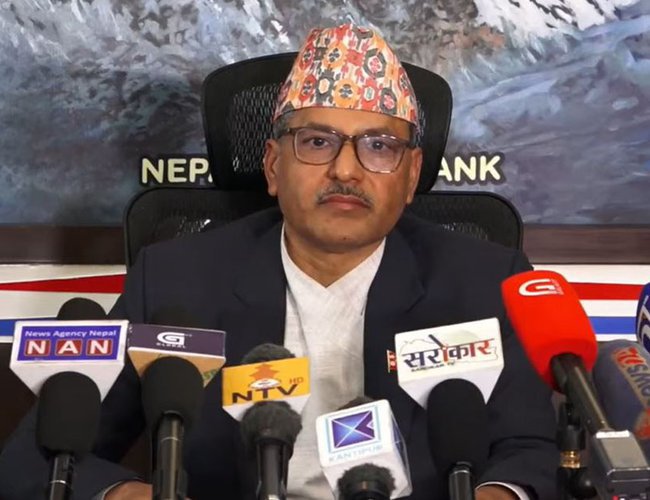 This is the first time that the growth target of credit expansion and money supply has been kept at such a low level in many years.

Massive imports coinciding with a surge in global inflation caused by rising prices of petroleum products contributed to a 70-month high inflation of 8.56 percent and depleting foreign exchange reserves.

Though the monetary policy aims to tame inflation at 7 percent as announced by the budget statement for the current fiscal year, the central bank believes maintaining inflation within that limit will be very challenging.

“The impact of rising fuel prices and supply side constraints on prices will continue to remain for some time,” the monetary policy states. “As domestic demand (for goods and services) will increase due to the upcoming general elections, salary increment (of government staff) through the budget and the expansion of the social security net, it will be challenging to maintain inflation within the limit.”

Experts say the monetary policy has acknowledged that rising inflation and massive imports have emerged as major concerns for the economic health of the country.

Governor Adhikari said the central government would review the policy on refinance, confining this scheme to the productive sector including agriculture, exports and sectors which are yet to recover from the Covid-19 pandemic.

“Such refinance should be provided as emergency aid only. If the central bank provides this option continuously, it will lead to credit expansion and affect economic stability.”

After Covid-19 hit the country, the central bank had adopted a policy of allowing banks and financial institutions to maintain the liquidity level at the lowest possible so that they would be able to expand credit to help the economy recover.

As the new monetary policy seeks to reduce expansion of credit, it announced that the CRR and the SLR would also be raised.

With the rise in the negative trend of balance of payment, the foreign currency reserve decreased by around Rs 2.3 billion US Dollars in the 11 months of the FY 2021/22. It has now been reported to be 9.45 billion US Dollars.

The reserve is adequate for the import of goods and services for 6-7 months. However, there were further challenges to keep inflation due to the devaluation of Nepali currency against the US Dollar lately.

More than two and a half billion rupees enter Nepal every day in the form of remittances. According to Nepal Rastra Bank data, youths who have gone for foreign employment have been sending 2 billion 745 million rupees to Nepal daily.

In the 11 months of the fiscal year 2078/79, 9 trillion 5 billion 380 million rupees have entered Nepal from abroad. Most remittances have come in the months of March, April and May.

Remittances account for an average of 25 percent of gross domestic product in Nepal. Of that, 7.8 percent was spent on debt repayment, 4.5 percent on purchasing household goods, 3.5 percent on education, 2.5 in capital formation, 0.5 for business and 0.6 percent has been saved.

This figure does not include people from India and foreigners by illegal process. Among them, 90 percent of young people went to Gulf countries and Malaysia and 10 percent went to other countries.

The dollar has come under renewed pressure amid higher demand from importers. Bankers say the “import mafia” has practically drowned the national economy and is still insisting that more imports be allowed while the country is already on the brink of default.

The policy-makers, after enjoying a decade of stability in the exchange rate and external accounts, are suddenly embroiled in a crisis scenario. Their challenge is to reset monetary and exchange rate policies so that the widening current account imbalance doesn't evolve into a full-blown currency crisis. In order to do so, Nepal needs to look at the underlying drivers, both domestic and international, of the ballooning current account deficit.

First, global prices of coal, oil, gas and other primary commodities, including food grains, have more than doubled over the last 12 months and this resulted in an unprecedented rise in the cost, insurance and freight value of those imports. The reopening of the global economy after the coronavirus pandemic, the breakdown of global supply chains and the Russian invasion of Ukraine were to blame for the surge in commodity and energy prices across the globe.

MCC-Nepal Issued An Tender For The Construction Of a Transmission Line By Agencies 1 day, 9 hours ago