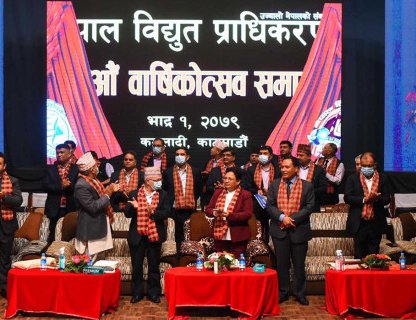 Minister for Energy, Water Resources and Irrigation Pampha Bhusal has pointed out challenges in stopping electricity leakage. To curb power leakage, there is a need to implement the international standards related to electricity and carry out reforms in the power distribution structure, said the minister at an event organised here on Wednesday on the occasion of 37th anniversary of the Nepal Electricity Authority (NEA).

Reminding that the country got around Rs 2 billion income from the control of power leakage alone in the previous fiscal year, 2021\22, she was of the view that it would be difficult to take economic strides until there is additional development in the energy sector.

She also urged the NEA to increase electricity consumption at home in the context when power export is increasing, and promote the purchase of electric vehicles and the installation of charging stations and electrical infrastructures. To increase power consumption domestically, electricity use in electric cooktops, electric vehicles and industries should be increased, she stressed.

The minister, also chairperson of the NEA board of directors, also urged NEA's employees to engage in delivering quality service to general people.

On the occasion, NEA's Managing Director Kulman Ghising shared that so far around 95 percent population of the country have access to electricity. The NEA was at work day and night to fulfill the government's goal of covering 100 percent population of the country by electricity in next two years, he said, adding that at present, 42 districts have got full power access.

The parent generator and distributor of electric power under the Government of Nepal got over Rs 16.1 billion in incomes in the previous FY, highest in its history of 35 years. On the occasion, 15 NEA employees and 17 offices under it were honoured for their work for the company. (RSS)