The provincial consultations on the draft vision, mission, purpose, the three strategic pillars and strategies will culminate with a consultation in Bagmati Province leading to the preparation of the final draft. 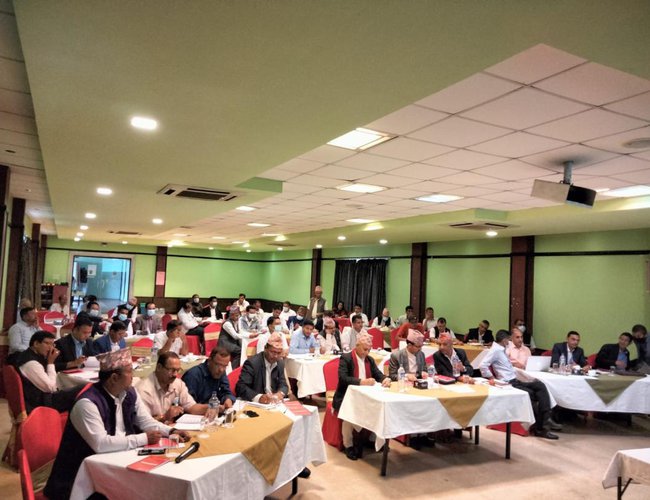 The Ministry of Industry, Commerce and Supplies (MoICS) organised the sixth provincial consultation on the framework of Nepal Trade Integration Strategy (NTIS) in Gandaki Province on Sunday. The NTIS is Nepal’s´ blueprint on the way to achieving trade-led economic growth, while maturing from an LDC to a Middle Income Country.

The provincial consultations on the draft vision, mission, purpose, the three strategic pillars and strategies will culminate with a consultation in Bagmati Province leading to the preparation of the final draft.

“We're in golden stage as a country where we can achieve much with the young population, we have to take steps to quicken growth,” said Mr. Mani Bhadra Sharma Kandel, minister of Tourism, Industry, Commerce and Supplies, Gandaki Province. We need supportive polices to assist industry to adopt competitive technologies, and also clarity on the role of all levels of government to support businesses, the minister added.

According to Gobinda Bahadur Karki, Joint Secretary at the Ministry of Industry, Commerce and Supplies (MoICS) the document now under preparation by a team of highly experienced trade experts led by Mr. Rameshwor Khanal, former finance secretary, will be finalised by the government by the end of the year. NTIS2022 will guide our policies in trade integration leading to Nepal’s graduation from LDC status in 2026 and therefore the strategy is important to ensure that we can continue to benefit from trade as a middle-income country,” said Mr. Karkee.

Mim Hamal, EU Programme Manager said, our Aid for Trade is about helping Nepal to address its constraints to trade, and we support to better benefit from the global rules-based trading system, implement domestic reform, and make a real economic impact on the lives of the citizens. In this regard, as an aid for trade coordinator in Nepal, it is our pleasure to join hands with government for timely formulation of important blueprint for the promotion of exportable goods and services. The NTIS 2022 will also include LDC graduation and possible action for accession to GSP+, climate action and climate change resilience through green and circular economy, gender and social inclusion in trade, youth entrepreneurship, fair and green trade for economic growth.

The MoICS has already organised similar consultations in Biratnagar of Province, Birgunj of Madhesh Pradesh, Dhangadi, Sudurpashim Pradesh, Surkhet, Karnali Pradesh and Bhairahawa of Lumbini Pradesh with funding from the European Union supported Investment Support Facility, a project under the EU-Nepal Trade and Investment Programme (TIP).

The expert team has prepared a tentative list of existing and emerging products and services for promotion in the strategy, which will be finalised by the government after internal reviews.