Father’s Day In Nepal 2022 And Kuse Aunshi: Importance And Significant

Father’s Day in Nepal 2022 And Kuse Aunshi: Importance And Significant 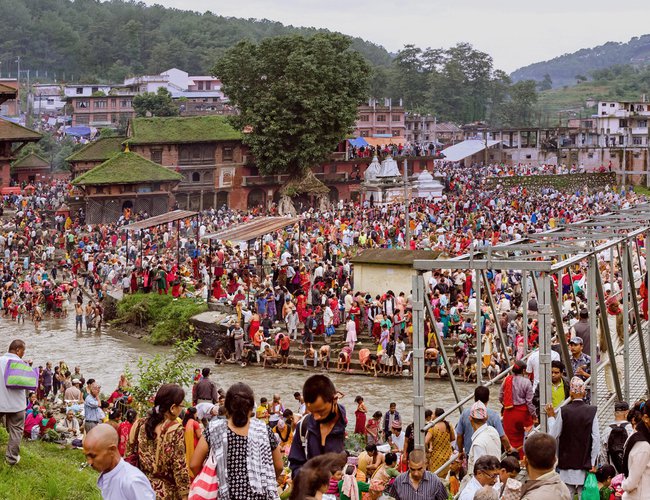 The date of Father's Day, Kuse Aunsi in Nepal falls in either in August (Shrawan or Bhadra) each year, depending on the cycle of the moon. The Bua ko Mukh Herne Din in Nepal runs for one day. Father's day is celebrated to respect the father.

This year, in 2079, Father’s Day and Kuse Aunsi in Nepal is on Bhadra 11 (August 27), which was on August 27, 2022, according to the English calendar. The Nepali date for Father’s Day 2079 is yet to be released. Nepal has more than 70 ethnic groups with almost all have their traditions and languages.

Different communities have their very own way of celebrating Father’s Day. All of the communities put together foods and tasty dinner party in and serve it to their father. The celebration and amusing of the competition depend upon the vicinity, climate and ethnicity.

While developing up, each little child wishes a superhero of their lives. A superhero is that one individual who's a position version to them. They need to talk like them, grow as much as to be like them, recognize and honor them, and at the same time love them with all their hearts.

The first superhero that each baby comes across in their existence is their father. A father is that symbol of strength and team spirit within the own family that binds the complete own family together. He is that individual who's often feared because of his strict principles, however, that fear is born out of the respect and honor that the child has for their father.

Developing up we see our fathers work day in and day out looking to earn money that allows you to help complete households. In families which might be educated and properly-off, numerous members of the own family work together and therefore the workload does no longer falls totally on a single individual’s shoulders. But that is not the case for all families.

For your kind information, in Nepal, Father's Day, Bua ko Mukh Herne din and Kushe Aunshi are the same. All meaning of them is similar.

Father and mother both are given the special place of God in the Hindu religion. To talk about mainly about the Father in this article, the word “father” also refers to “Pita or Babu” which stands for guru, Rakshak and the Palan Karta. Father is a teacher, protector and the savior.

Father’s Day is the day of paying special and additional time to him. Father’s Day is even recognized as Kuse Ausi or Pitri Tirpani Ausi or Gokarne Ausi. These days, Nepalese pay tribute to Father’s Day to their father with their loved food, clothing, and different pieces of stuff liked by the father.

On this day, people pay respect to our father for his care and love for us during his life. Hence, this day is also recognized as "Babu ko Mukh Herne din” which means to look someone's face. Kuse Ausi is on Bhadra Krishna Ausi. Ausi isn't an any-moon day.

Importance of Kush in our lives

This sacred and scientifically proven plant is a widespread genus in the grass family found on almost all continents, inhabited hills, and islands. Kush is a sacred plant with a very important cultural and religious role in the Vedic Sanatan Hindu rites, the scientific significance of which has also been proven.

Kush, scientifically called Eragrostis cynosuroides, is a sharp-edged grass of religious faith. Let me explain the origin of this scientific name derived from the Greek word, Eros means to love so this is considered as a love grass too. Agrostis means grass. Also considered as highly nutritious fodder for livestock, Kush is a companion of human civilization since primitive days. Scientifically, this grass is a hyperaccumulator of cesium-137, functioning as a remover of highly toxic radioactive atoms from the environment.

A variety of medicines are also made from the roots of the plant Kush, which is easily available from the Terai to the hills of Nepal. In ancient times, Kush's sharp grass was cut with empty hands during the examinations of the students studying in the Gurukul. Kush is compulsory in every ritual of Satanaga philosophy. Today, Kush is brought home on a night or Aaunshi. The glory of Kush is also described in the Bhagavad Gita, Garuda Purana, Atharva Veda, and Vishnu Purana. The diaries and rituals of Hinduism are very scientific, the Gita and the Vedas are the mothers of invention.

During a scientific experiment, a handful of Kush was placed between the radiations and it was found that Kush reflected all the radiations away from its surroundings. Thus the perpetual use of Kush in the Sanatan culture presents the records of ancient science and the effective practical lifestyle. From generation to generation, Hinduism encourages everyone to use the rings and other cultural uses made from this scientifically proven marvelous Kush. The use of Kush as a ring on the finger of the right hand demonstrates the belief and scientifically proven principles that annihilate the turbulent waves and radiation in the atmosphere.

Today, Gokarneshwar Dham, Uttar Gaya, and Pitri Tirtha Dham has a special visitation. This place of Nepal, nearby Kathmandu also known as Uttar Gaya is a special place of pilgrimage for the followers of Sanatan Darshan from all over the world, especially for the salvation of ancestors, the importance of this place of pilgrimage has been great since mythological times. In this holy place, which is mentioned many times in Sanatan texts, today on the day of Kushe Aunsi, people visit for darshan, donate, and do Pitru Punya. Taking a dip here is considered very auspicious on the day of Kushe Aaunshi.