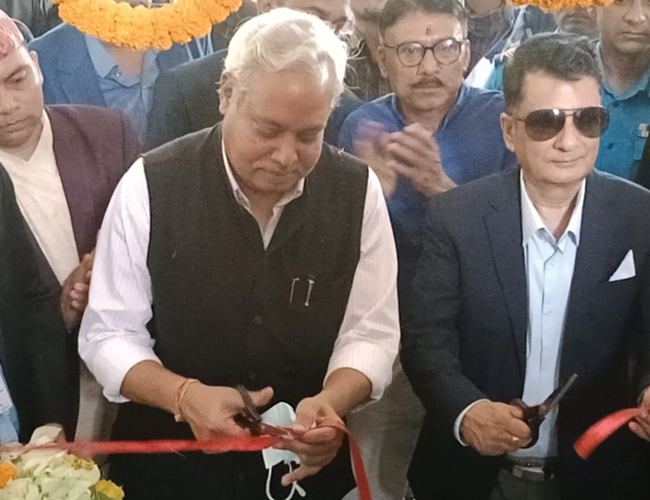 Minister for Communication and Information Technology Gyanendra Bahadur Karki and Indian Ambassador to Nepal Naveen Srivastava amidst a function held on Saturday.

The Indian government has been assisting in Nepal’s education, health, road, tourism, physical infrastructure, and human resources since time immemorial, he said while speaking at an inaugural function of Nepal-India friendship Building of Mahendra Secondary School, Barahakshetra-6, constructed some 14 years ago, and awaiting formal inauguration.

Constructed at Chakraghatti of Barahakshetra Municipality-6 of Sunsari district, the building was jointly inaugurated by the Minister and Indian Ambassador to Nepal Naveen Srivastava amidst a function held on Saturday.

Constructed at a cost of Rs. 22.1 million with a total of 16 rooms, the building built with assistance of the Indian government has reflected the strong relation between the two nations.

On behalf of the Minister of Nepal government and being a permanent resident of Sunsari constituency 4, Minister Karki thanked the ambassador for the contribution in construction of Nepal-India Friendship Building.

Minister Karki said that there is a need to promote the Barahakshetra, Ramdhuni, Pindeshwor, Dantakali and other areas as there is a high possibility of bringing in Indian tourists.