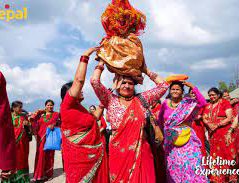 The Gaura Festival (Gaura Parva) is a Nepalese and Indian Hindu festival which is widely celebrated in Sudupaschimr province of Nepal and Uttarakhand State of India. The festival honors the Hindu goddess Gauri. Gauri is one of the aspects of Parvati, the wife of the Hindu deity Shiva. She is worshiped as the protectress of women and goddess of harvest.

Gaura Parva (Nepali: गौरा पर्व; Saton–Athon (Kumaoni: सातों-आठों) or Gamara) is an ancient Hindu festival celebrated by the people residing in Sudurpashchim province and parts of Karnali province of Nepal as well as in Kumaon region of Uttarakhand state of India. The festival commemorates the wedding of goddess Gaura (Parvati) to Lord Shiva.

Over the years, the festivals has become an identifying factor for the people of Sudurpashchim region. It is considered to be the one of the most important festival of the Khas community of Sudurpashchim and Karnali provinces of Nepal.The celebration of the festival has also spread to other parts of the country. In the Nepalese capital city of Kathmandu, people gather at Tundikhel ground on the final day of the festival and perform deuda dance.[5] In India, the festival is celebrated in the regions around Pithoragarh district of Kumaon division of Uttarakhand state.

In Hinduism, Parvati is venerated as the goddess of love, devotion and fertility. She is the wife of Shiva and the mother goddess in Hinduism. Just like other Hindu deities, Parvati has many manifestations and aspects. One of her aspects is Gauri, “the fair one”. Her golden skin symbolizes ripened harvests.

Gaura Parva is the day when Nepalese women worship Gauri with special rituals. They usually pray in the temple in the morning, and then return home and bless their husbands with Biruda, a ritual mixture of five seeds of crops. This blessing is supposed to give their husbands health and long life.

Gaura Parva is not a nationwide festival in Nepal, it is primarily celebrated in the western part of the country. It falls in the Nepali month of Bhadra, which corresponds to August/September in the Gregorian calendar.

There are many tales regarding the origin of the Gaura but mainly this day, the women worship goddess Gauri, the wife of Lord Shiva for their husband's health and long age.[7] The loving bond of Shiva (Maheshwar) and Parvati (Gaura) is the main reason for the celebration of the festival. Goddess Gauri went on rigour penance in order to obtain lord Shiva as her husband. The penance of the goddess is venerated in this festival.

According to another tale, Sahastrarjuna, one of the ancient Heheya dynasty kings, killed Bhriguvansi Brahmins while demanding the return of his wealth. The grieving widowed wives of the Brahmins fasted and prayed to the goddess Gauri, to protect their integrity. One of the Brahmin woman then gave birth to a skillful son who went to blind the king Sahastrarjuna. The king then apologized to the women for his crime. In honour of the benevolence and omnipotence of the goddess Gauri, this festival is said to be celebrated.

The Hindu calendar is lunisolar but most festival dates are specified using the lunar portion of the calendar. A lunar day is uniquely identified by three calendar elements: māsa (lunar month), pakṣa (lunar fortnight) and tithi (lunar day).

Furthermore, when specifying the masa, one of two traditions are applicable, viz. amānta / pūrṇimānta. Iff a festival falls in the waning phase of the moon, these two traditions identify the same lunar day as falling in two different (but successive) masa.

A lunar year is shorter than a solar year by about eleven days. As a result, most Hindu festivals occur on different days in successive years on the Gregorian calendar.

Gaura Parva is a lunar festival. The date of the festival is calculated by the official astrological committee (Panchang Samiti) every year. The occurrence of festival usually falls in the month of either August or September according to Gregorian calendar and either Shrawan or Bhadra month according to Nepali calendar.

The major celebration of the festival lasts for four days. The festival officially begins on the day of Biruda Panchami and ends on Gaurashtami, however the preparation for the celebration is started few days earlier. The place where the idol of Gaura is to be established, needs to be painted with red clay. The clay is collected on the day of Janai Purnima (or Kushe Aunsi, for Adheri Gaura). On the next day (Pratiprada), a specific place in the house,where rituals are to be carried out, is cleaned and then painted with clay. On the third and fourth day (Dwitiya and Tritiya), the celebrants clean their house and gather items required for the celebration. On the fourth day (Chaturthi), the seeds that are to be soaked on the day after, are collected and cleaned.[

Biruda (soaked grains and beans) being flung up in the air on the final day of the festival. The devotees catch the grains as a prasad.

Biruda (soaked grains and beans) being flung up in the air on the final day of the festival. The devotees catch the grains as a prasad.

The festival officially begins on the day of Biruda Panchami (fifth day of the fortnight according to Hindu calendar). On this day, the married women soak five types of seeds (wheat, horse gram, pea, rhododendron and black gram), also known as Pancha Biruda following specified rituals, in a bronze or brass vessel. The women fast for a whole day on this day.

In the day after, known as Shashthi (sixth day according to lunar calendar), the soaked grains are taken to nearest pond, river and spring and then washed. On this day, the women gather in the washing spot and sing deuda songs and dance. The grains are then brought back to the house.

On the day of Saptami (seventh day according to lunar calendar), the Biruda is taken to nearest temple. The women pluck plants of five different grains from a specified field and take it to the village elder's house. The house where the plants are taken is known as Gaura Ghar. In absence of village elder, the celebration could be carried out in any specified house.

An idol of goddess Gaura is made using the grasses. The grasses are kept in a bamboo basket and covered with red cloth. The women performing the ritual fast for the whole day and wear a holy thread made of dubo grass on their neck. In the evening the idol is worshipped and different garment and cosmetic items are offered to the goddess.[

Two Shilas Left For Ayodhya From Janakpurdham By Agencies 2 days, 13 hours ago