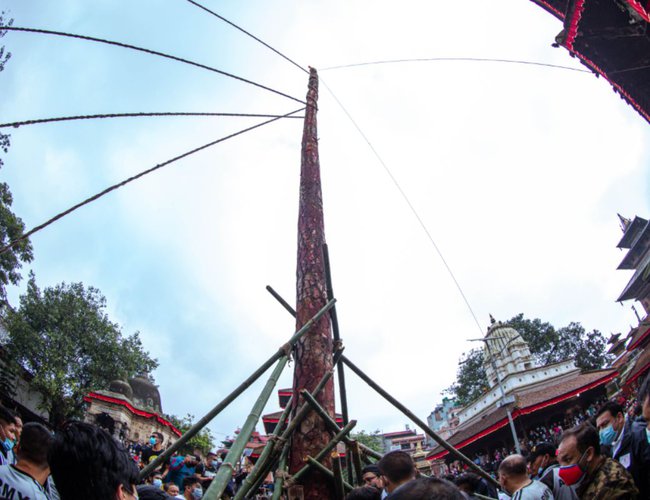 Indra Jatra, one of the biggest festivals celebrated in Kathmandu valley, has begun with the erection of a lingo (sacred wooden pole) at Hanumandhoka premises in Basantapur Darbar Square on Saturday morning.

The eight-day long exuberant festival of the Newari community of the Kathmandu Valley is a time to honor the recently deceased and to pay homage to the Hindu god Indra and his mother Dagini, to ensure they bless the coming harvest.

Lord Indra has an avatar form as the god of rain, which makes him a very important deity in Hindu communities where a successful harvest is vital.

The legend behind this story says that Indra, in human form, visited Kathmandu Valley to pick a flower that his mother wanted to use in a ritual. He was caught picking the flowers and accused of stealing. To smooth out the incident, Dagini descended from heaven and when they realised that their captive was none other than Indra, he was promptly released. Dagini said that to thank the people for releasing her son and to make up for Indra's transgression, she would make sure the crops had dew every morning and she would also take up to heaven those who had died in the previous year. This forms the basis for Indra Jatra (meaning "Festival") every year.

The celebrations involve a Kumari. In a tradition that dates back over a thousand years, these are young girls who are selected to be living goddesses when they are about three years old. The Kumari are only allowed out of their houses on major festivals such as Indra Jatra. When they do participate, their feet are not allowed to touch the earth, so they must be carried or walk on special carpets. When the Kumari reach puberty, they return to normal life - the bleeding shows their human nature. That means that if they bleed at all from even an accidental cut, they stop being a Kumari.

Two boys playing the roles of the gods Ganesh and Bhairab (the most fearsome form of Shiva) accompany the Kumari in a procession to the royal palace, where it stops in front of the 12-foot mask of the Bhairab. Shown above, the Bhairab is only displayed in public during this festival.

And while the Bhairab might look fearsome, it doesn't scare people away as rice beer pours from its mouth!

In addition to its religious aspect, this holiday also commemorates the day in 1768, during Indra Jatra, when Prithwi Narayan Shah conquered the Kathmandu Valley and unified Nepal.

Fulpati 2022: Important And Significance By NEW SPOTLIGHT ONLINE 53 minutes ago