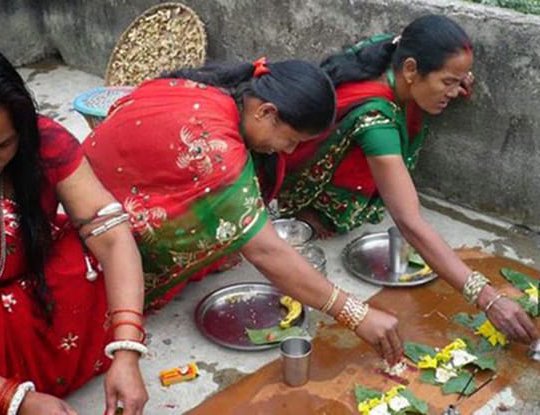 Celebrated with a wish for longevity of the children, the festival of Jitiya has begun from Friday.

One of the major festivals of the Mithilanchal zone, it has commenced with the observance of the ‘Naha Kha’ ritual, which means to take food after taking the ritualistic bath. The Jitiya festival, which is considered holy, has started from today in the entire Mithila region including Janakpur according to religious rules.

On this day women make offerings on Ghirola leaves to Lord Jeetamahan and the deceased father before fasting and eat chiura curd and amot (food made from mango juice). This day is called ‘Naha Khay’, which means having food after bath.

Baratalu women who fast without drinking water from 4 am on Saturday will complete their fast at 10 am on Sunday. Bartalu started the fast by listening to the story of Jitmahan by bathing in the holy water bodies Gangasagar, Argajasar, Dhanush Sagar, Gordhoi Pokhari and other ponds and rivers of Janakpurdham today. In this case, there is a tradition that the older will say and the younger will listen.

One day before the fast, Bertalu should bathe in various water bodies and drink, apply sugar and mustard oil on Ghirola leaves. From the oil offered to the deity, it should also be applied on the children of its own branch.

According to 76-year-old Gitadevi Jha of Kshireshwarnath Municipality-5 Mahendranagar, it is customary to eat millet bread, salty greens and fish after worship on the first day of the fast. It is called Mach Maruwa (fish and millet) in the local language. According to tradition, a woman fasting in the morning should do lipgan, that is, keep some food on her lips.

Most of the women take curd and curd in their mouth and eat it. After that, serious fasting begins. Pandit Lalbabu Jha said that this fast celebrated on the Ashtami day of Ashwin Krishna Paksha has special significance.

Pandit Jha said that Jitiya festival, which is celebrated for the long life of children, the birth of a son and family happiness and peace, also has special religious, cultural and tantric significance. He said that the cultural role and importance of Mithila women has also been highlighted as women also offer Pind to their late father in this festival celebrated on Pitru Paksha.

Purohit Indrakant Jha says that Jitiya Vrat is considered to be the most sacred of the fasts observed in Mithilachal. He said, ‘Even if a woman burps or spits or bites her tongue on the day of fasting, the fast is considered a failure. That is why this festival is also called Khar Jitiya. A fasting person who has failed once again will not be able to fast for the rest of his life.’

In the kingdom of King Shalivahana, after a woman’s seven sons were taken away by a demon, the king brought back all the seven sons from the demon, so the women named Shalivahana Jimut Ban from that day and fasted in the memory of the king.

There is a saying about the festival of Jeetiya in Madhesh:

In other words, the Jitiya festival is very tough. To celebrate this festival, the mother puts her children to sleep and eats the whole plate herself, but this is not a reality, it is empty to show its purity and importance.

For those who are vegetarians, it is customary to take a bath and eat gamhari (rice grown inside the pod) kheer or rice. On Ashtami Tithi, at about 3-4 o’clock in the morning, every woman cleans the achaman and applies oil on the leaves of Ghirola and applies Pina Argha on it.

After that they have to fast day and night, so they eat a lot of food. It is believed that the above-mentioned saying regarding this fast is customary as women eat food before the fast.

After the child wakes up his mother washes his mouth and hands, and at night gives him chiura, a naived form of curd, which she keeps in gyroula leaves, and he fasts day and night and listens to the story of Jimutavahana . Chill and jackal. In the morning (early evening) on ​​the day of bathing and eating a mantra is recited on the wall of the house, called Ongathan. The Ongthan mantra is as follows: Sisters brother structure.

The next morning the devotee wakes up early in the morning and goes to the pond, the river and takes bath, and after applying oil in a bowl in the same dill, comes home after doing Argha and applies the oil of worship in his house. A bowl for their children’s hair. After this, everyone is allowed to eat curd, chiura and fruits and the celebration ends by chanting the fast.

On the day of Krishna Ashtami, Bartalu takes a bath in a nearby pond and offers Arghya to Lord Surya. Then they decide to fast and come home and fill the cast. Coconut, cucumber, apple, banana and other fruits are placed on the dal and covered with a new cloth.

Around noon, the women of the whole village gather in one place and an old Bartalu lady narrates a story about the significance of the Jimutavahana Vrat, the beginning of the festival, the deity of Jimutavahana, and after hearing the story, everyone returns to their House.

In the evening a small pit is dug in the courtyard and covered with cow dung and a pond is formed. In addition to burying a small branch of the Pachi tree in the pond, they also draw a clay figure on the branch and a fox figure on the underside of the branch. There, an idol of Jimutavahana of Kush is placed in an urn filled with water and the women carrying Jimutavahana are worshiped with fruits.

As mentioned in Bhavishya Purana, Shalivahana was the son of King Jimutavahana. Due to the great grace of Mahadev on her, women who fasted regularly were blessed with long life children from the Lord.

There is a tradition of worshiping some birds and animals with special significance in various festivals of Hinduism. Accordingly, animals such as cows, pigeons, crows, dogs, ducks, tigers, rats and others are worshipped, while chills and jackals are worshiped during the Jitiya festival.

Jitiya festival is also considered to mark the arrival of Dasain.

That is, ten days after Jitiya, Dasain, ten days after ten, Diwali and six days after Deepawali, Chhath festival. Since there is a popular belief that breaking this fast will harm children, it is important to understand the social, religious and cultural diversity of this festival as an integral part of the social structure.

Two Shilas Left For Ayodhya From Janakpurdham By Agencies 1 day, 11 hours ago

Kaligandaki Stones Heading To Aayodhya By Agencies 2 weeks, 1 day ago

Makar Or Maghe Sankranti 2023: The Festival Of Surya (Sun) By NEW SPOTLIGHT ONLINE 2 weeks, 2 days ago