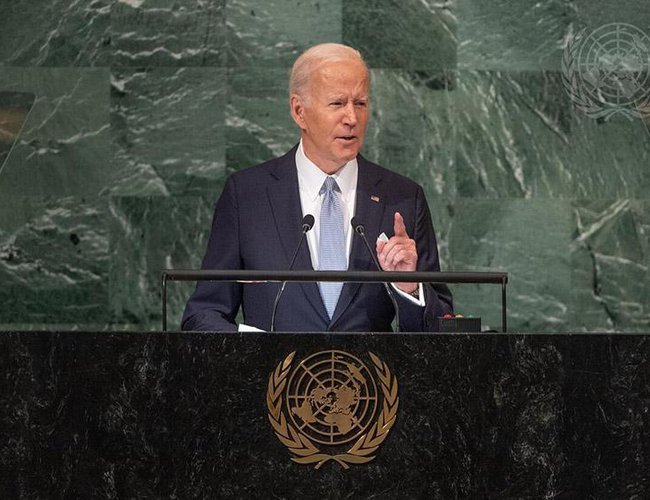 US President Joe Biden also took aim at Putin, accusing him of trying to "extinguish" Ukraine and its people.

Biden cast himself as a protector of the international order and Putin as a menace. He had heard the Russian leader threaten, in a televised speech, to deploy his nuclear arsenal. He accused Putin of being "irresponsible" and even "reckless."

Biden highlighted how the invasion and the disruption of exports has left people far from Ukraine hungry. He pledged another 2.9 billion dollars to restore food security.

He also urged other leaders to press ahead in their efforts to hold the Russians accountable.

World leaders are taking turns at the UN General Assembly addressing each other -- and one of their peers who is not even there. On Wednesday, President Volodymyr Zelenskyy provided them with an update on the war in Ukraine. He zeroed in on Russian President Vladimir Putin without mentioning his name.

Zelenskyy said, "There is only one entity among all UN member states who would say now, if he could interrupt my speech, that he is happy with this war."

Delegates had granted Zelenskyy an exemption to address the assembly over video. He said Russia deserves to be punished for crimes against his country. He added that it should be stripped of its veto power in the Security Council.

Over 1,500 Die In Devastating Earthquake In Turkey By Agencies 3 hours, 56 minutes ago