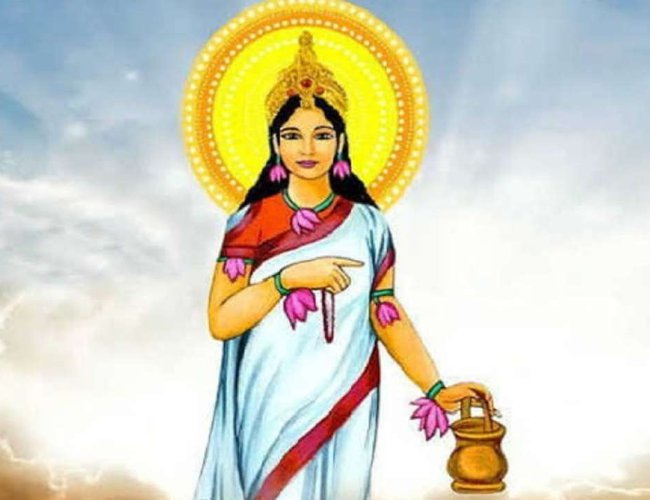 The 2nd day of Navtrati(second day of navratri) is dedicated to Goddess Brahmacharini or Brahmacharini Maa, the second form of Divine Maa Parvati. Brahma means penance and 'Charini' means whose achar (behavior) is that. So Maa Durga's manifestation as the one who does penance or 'tapasya' translates as Brahmacharini Maa.

The festival of Navaratri (nine nights) is a significant festival for Hindus, dedicated to the nine forms of Goddess Parvati or Maa Durga and celebrated by devotees with enthusiasm and fervour.

Brahmacharini Mata is also known as Devi Yogni and Devi Tapsvini. The beautiful Brahmacharini Devi or Maa Brahmacharini's image portrays Her holding a Kamandal or water pot in Her left hand and Japa Mala (Rosary) in right. Maa Brahmacharini wears White Saree with bright-Orange border and Rudraksh as ornament with a serene, calm and graceful appearance.

Mata Brahmacharini personifies love and loyalty. Brahmacharini Maa is an epitome of knowledge, wisdom, single minded dedication and said to be the mightiest of the Search in all categories

Legend says that Goddess Parvati's previous incarnation was Devi Shakti who had self emulated Herself because Her husband, Lord Shiva, was disrespected and disregarded by Her father Prajapati Dakshya. So, maiden Goddess Parvati knew that She wanted to get Lord Shiva as Her husband. Lord Shiva was in intense meditation for years during that time. It is said Naradji advised Goddess Parvati and She followed a path of severe austerity, performed extreme "tapa" or penance. She spent one thousand years, surviving on fruits and beet-roots and then the next one hundred years by eating leafy vegetables only.

Convinced, Kamadeva shot an arrow of love at Lord Shiva. It is believed that when Lord Shiva is disturbed in His meditation then He takes His Rudra rupa, which is His angry, fierce form.

When Kamdeva's arrow hit Lord Shiva, He opened His eyes and burned Kamdeva to ash. On the other side, Parvati suffered the torment of nature and severe conditions like torrential rains, scorching sun and biting cold, while She lived under the open sky. It is also believed that Maa Parvati continued Her penance, austerity and asceticism for thousands of years and ate only Bilva leaves to survive. Post this She gave up eating Bilva leaves too. Brahmacharini Mata was called Aparna because of this. For several thousand years she went on without any food and water. The only single minded focus of Brahmacharini Maa was Lord Shiva and Brahmacharini Devi kept Herself immersed in worshiping Lord Shiva. Lord Shiva was aware of Maa Brahmacharini's Tapa. So once disguised as an ascetic, Lord Shiva met Brahmacharini Devi and dissuaded her from leading this dangerous path of Tapasya. But Goddess Brahmacharini was unshaken in Her resolution. Sticking Her vow, she continued Her tapasya. Lord Shiva seeing Her determination finally accepted Brahmacharini Maa as His wife, once again Shiva and Shakti were together. . In this way, the Divine Mother devoted herself completely in worship of Lord Shiva. This great Tapa(penance) glorified Her with the name 'Brahmacharini'. It is said - Veda, Tattva and Tapa are synonyms for Brahma. The form of Brahmacharini Maa is tremendously effulgent, calm and extremely majestic. Lord Shiva represents the soul or the self within and Maa Durga/Parvati is the mind. This union indicates that after several penances and self-control one trains oneself to achieve the self. Brahmacharini Devi helps us to understand this aspect with the way She conducted Herself during Her penance with patience, focused intention and dedicated devotion to attain Her desire.

WHY BRAHMACHARINI MAA PUJA IS DONE

Brahmacharini Maa personifies love and loyalty. Mata Bhramacharni is store-house of knowledge and wisdom. Rudraksha is Brahmacharini Mata's most favoured adorned ornament. Many devotees organize 'Mata Ki Chauki' where near and dear ones are invited and devotees keep awake in the night, singing devotional songs and praises in honour Brahmacharini Maa.