By signing an MoU to build 1061 MW Upper Arun project under blended finance, Nepal Electricity Authority and its subsidiary UAHEL have pushed Nepal into a new era in the power sector. This is the first four digit project which will be built by Nepal. In the presence of minister for Energy, Water Resources and Irrigation, NEA MD and chairperson of AHEL Kul Man Ghisin signed the MoU with financial Institutions 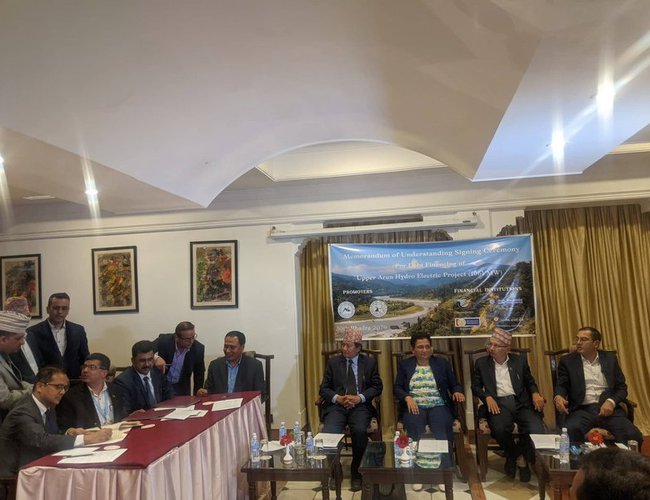 The day was the most important for Minister for Energy, Water Resources and Irrigation Pampha Bhusal and Managing Director of Nepal Electricity Authority (NEA) Kul Man Ghising in their career.

Following the signing of a Memorandum of Understanding (MoU) with local financial institutions under the lead of Hydroelectricity Investment and Development Company Ltd (HIDCL), MD Ghising’s main dream to build 1061 MW, the first four-digit hydropower project , has come true.

Had Ghising’s tenure been extended two years ago, the project would have started last year. For Minister Bhusal, this is a major success as a minister to pave the way for the construction of the largest hydropower project of Nepal. 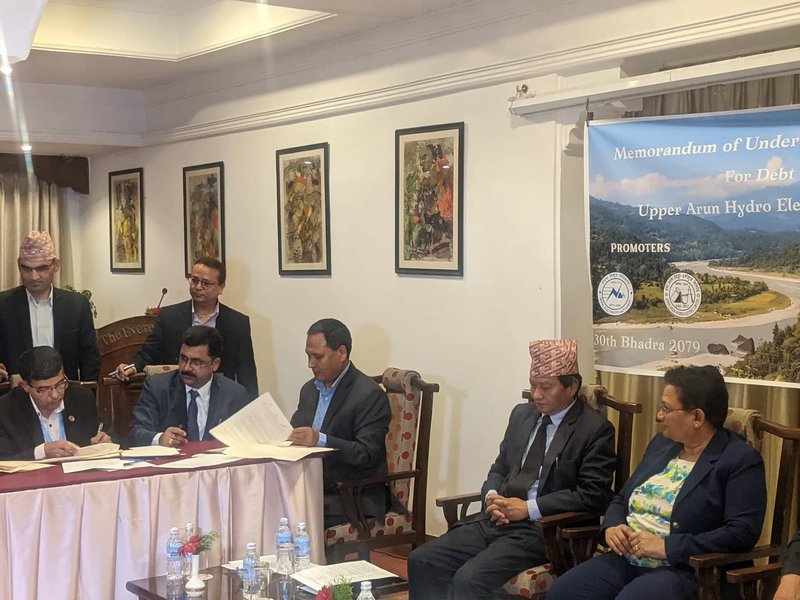 “This is a matter of pride and history for me to see the signing of MoU for the loan. This is possible due to the efforts of my party’s predecessors who also have made contributions to make this event possible,” said Minister Bhusal.

In his career as NEA MD in the second year of his second tenure, Ghising said the signing of MoU is a highly important event for Nepal and Nepal’s hydropower sector.

“We are now in a position to construct a project with four digits capacity. After completion of the three-digit hydropower project, Upper Tamakoshi, our confidence has gone up and NEA will complete the project in time,” said MD Ghising.

“As the World Bank has already agreed to invest in Upper Arun, the signing of MoU with local financial institutions will open the opportunities,” said Ghising. In his first tenure, Ghising added over 600MW of power to the national grid. During this tenure, he signed MoU to construct almost 1700MW of hydropower projects in terms of capacity. 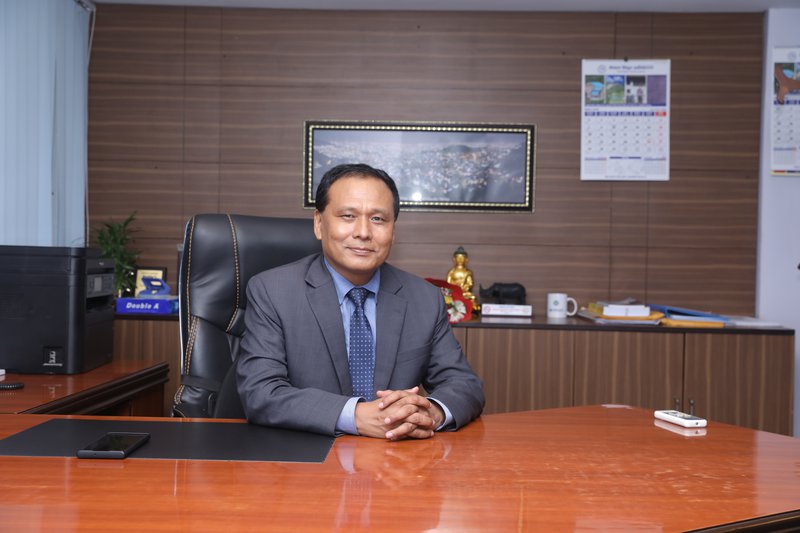 He said that NEA will now construct only big projects and IPPs will be allowed to construct smaller projects.

The 1,061MW semi-reservoirs Upper Arun Hydropower Project to be built in Bhotkhola Rural Municipality of Sankhuwasabha will be promoted as a model project of ‘blended financing’ (mixed investment model).

Similarly, concessional loans from international multilateral development partners, and domestic banks and financial institutions will be involved in project financing. The authority will own the majority of shares in the Upper Arun Hydro Electric Company established to build the project.

Upper Arun, which has an estimated cost of $1.750 billion (about Rs 214 billion), including interest and price increases during the construction period, will be financed by 70 percent debt and 30 percent equity shares.

The developer company has estimated approximately Rs 150 billion rupees loan, Rs 97 billion rupees will be managed by raising concessional loans from multilateral international lenders such as the World Bank and the European Investment Bank, and Rs 53 billion rupees from domestic banks and financial institutions. 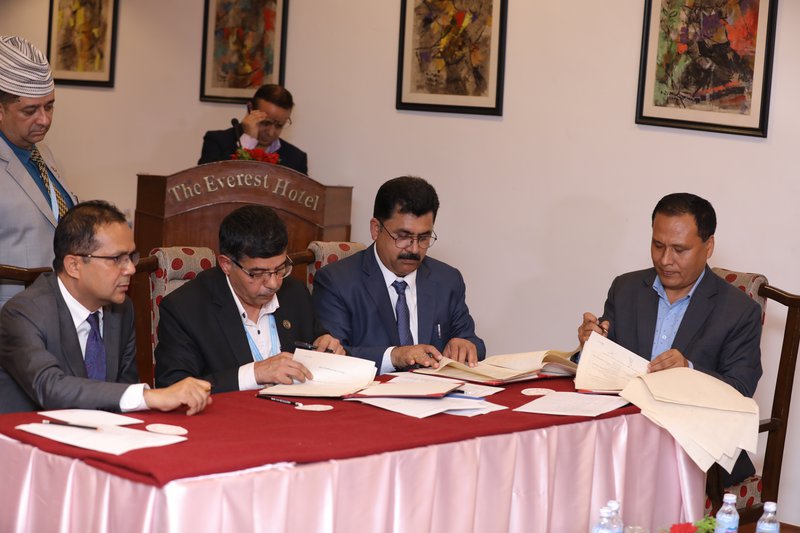 According to the NEA, the co-financing of international lenders will be led by the World Bank for the project. Under the leadership of the Hydroelectricity Investment and Development Company (HIDCL), the investment of Rs 53 billion will be made through co-financing from local banks and financial institutions.

Importing hydromechanical, electromechanical and transmission line equipment for the project from abroad will cost about 30 to 40 percent of the total cost and the said amount will be paid with dollars obtained from foreign investment.

Kulman Ghising, managing director of the NEA and chairman of the promoter Upper Arun Hydro Electric Company, said that the semi-reservoir project will be built in the blended financing modality, which will be the first kind of its nature in Nepal. “After the execution of this project, it will create a stir in the overall development of the country.”

“In the co-financing led by HIDCL, the private sector banks and financial institutions of Nepal will also provide loans to the project. This will become the first model of blended financing, which will bring a positive movement to the country’s economy,” Ghising said, adding, Upper Arun, which has an installed capacity of four digits (1061 megawatts), will produce almost the base of the energy currently consumed in the country.

The HIDCL will manage about Rs 53 billion in the project through co-financing with various banks and financial institutions including Nepal Bank, Rastriya Banijya Bank, Citizen Investment Trust, and Employment Provident Fund and among others.

Compared with energy generation, the cost of the project is much cheaper. “The project will generate more energy during winter, said Ghising.

According to Phanindra Joshi, the head of the company, the goal is to prepare the loan investment term sheet within 120 days from the date of signing the agreement and manage the financial closure of the project within one year.

Minister Bhusal said that a detailed study of the project will be completed as soon as possible and construction will start after finalizing the investment issue. “The project is being discussed but will not be constructed for decades. We are making every effort to end this kind of trend and build it for the benefit of the local people,” she said.

Secretary of the Ministry of Energy, Water Resources and Irrigation, Shusheel Chandra Tiwari, said that the work should be started immediately according to the schedule set for the construction of the project.

As part of the preliminary preparations for the project, the tenders submitted for the selection of construction contractors are being evaluated to construct about 21 kilometers of access roads including 2 kilometers of tunnels. The access road is being worked on with the goal of starting next December.

The compensation for the acquisition of 225 hectares of private land required for the project has been determined. About 22 households will be physically displaced by the project. The study has shown that the environmental and social impacts of the construction of the project will be relatively low.

The project is designed to run at full capacity for 6 hours a day during the 6 months of winter when electricity demand is high. The project will produce 4.51 billion units of energy annually.

About 30 percent of this energy will be produced in winter. The generated electricity will be transmitted to the national transmission system through the proposed substation at Haytar in Sankhuwasabha through a 400 kVA transmission line.

Under the lead of Hydroelectricity Investment and Development Company Ltd (HIDCL), a Memorandum of Understanding (MoU) has been signed for loan investment to the 1061 MW Upper Arun Hydropower Project to be constructed in Sankhuwasabha.

The Upper Arun Hydroelectric Limited (UAHEL), a subsidiary of the Nepal Electricity Authority (NEA), has already invited expressions of interest from 22 May from eligible consulting firms to assist with the development of the 1061 MW Upper Arun project in eastern Nepal.

The project will include the construction of a concrete gravity dam with an arc axis on the Arun river, one of the major tributaries of the Sapta Koshi river basin, with a crest elevation of 1653m, a maximum height of 100m, and a total crest length of 183m, to create a peaking reservoir with full supply level of 1640m, a minimum operating level of 1625m and peaking poundage of 2.41 million m3.

The reservoir with a total capacity of 5.07 million m3 will be used for peaking power production during the dry season and for sediment trapping to avoid the construction of an underground desander. An ungated free overflow spillway will ensure management of floods and Glacial lake Outburst Floods (GLOFs) while four low-level and two medium-level outlets within the dam will enable flood and sediment management.

The project will also feature an underground powerhouse on the left bank of the Arun river, about 1.4km upstream of its confluence with the Leksuwa river, to be equipped with six sets of six-nozzle vertical-axis Pelton turbine-generating units each with a rated capacity of 173.33MW. The units will operate under a minimum rated head of 508m and rated flow of 39.24m3/s. Water will be supplied to the powerhouse via a 1.4 km-long low-pressure headrace tunnel with a diameter of 8.4m.

The locals have been demanding that the construction of the 1,061MW semi-reservoir Upper Arun Hydropower Project in Bhotkhola Rural Municipality of Sankhuwasabha district be started immediately.

To meet the growing demands for electricity in the country, NEA has announced to start the construction of the Upper Arun Hydroelectric Project in 2021 targeting to complete in 2026. 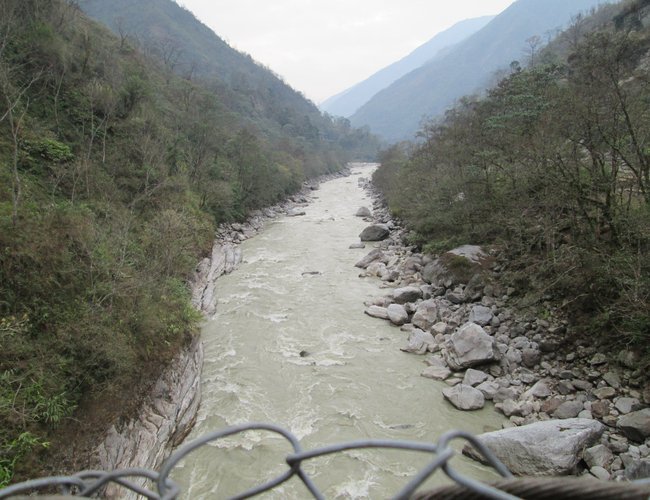 After their assumption of the Managing Director post by Ghising, he chooses two projects Upper Arun and Dhudkosi two projects as storage projects to meet the demand of picking.

“The implementation of Upper Arun is no on. We are negotiating with Asian Development Bank for the funding of the Dhudhkosi Storage project,” said MD Ghising. “We have advanced a process of construction of Upper Arun Hydroelectricity Project placing it under a high priority.”

NEA has called a pre-qualification notice to select a Contractor Company for the construction of a 24-kilometer access road. The road section includes 2 kilometers tunnel and two bridges to reach the Chepuwa dam site from the Chyangran market point of Biratnagar-Kimathanka (Kosi Highway).

According to the working schedule, after evaluating the proposals of interested companies, NEA is planning to seek technical and financial proposals from successful companies for pre-qualification.

”We are working under a work schedule to start the construction of the road,” said Ghising, “A design of the access road has now been completed. Our aim is not to make any delay in the construction work of the main structure of the project.”

According to MD Ghising, NEA has a plan to complete the construction of the road within 24 months. NEA will complete the detailed engineering design and selection of contractors and prospective investors in parallel with the road construction period.

Compared with energy generation, the cost of the project is much cheaper. The project will generate more energy during winter.

The government has already decided to construct the project in the company model by issuing shares to the public.

World Bank has already said that it is ready to invest in the project constructed through the company issuing shares to the public. “The money will be no problem. We can manage resources through the financial institutions.”

After pulling out from Arun III, World Bank has not invested in any hydropower project.

The review showed that the project has a capacity of 700 MW with an estimated cost of US$ 900 million. Since the project lies in the high Himalayan zone, it will have very less effect on human beings and fewer environmental implications. NEA has already pushed 30 MW Ikhuwa Hydropower projects which are going to be a part of Upper Arun.

Minister Bhusal said that a detailed study of the project will be completed as soon as possible and construction will start after finalizing the investment issue. "The project is being discussed but will not be constructed for decades. We are making every effort to end this kind of trend and build it for the benefit of the local people," she said.