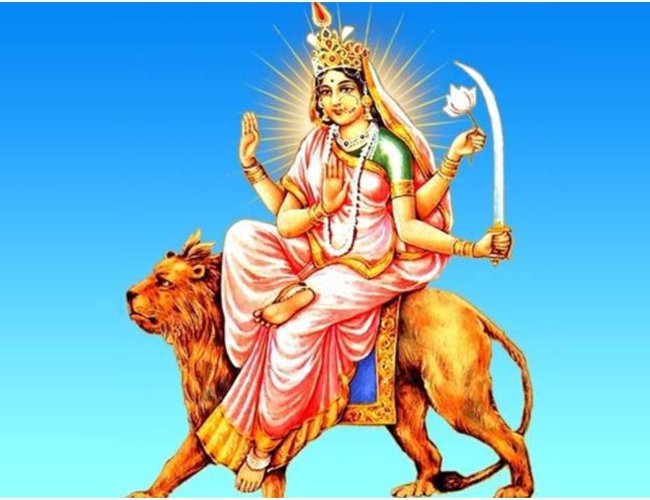 Today is the sixth day of Navarati 2022 and day of Mata Katyayani. She is the sixth aspect of the Navadurga forms of Mahadevi. She is seen as the slayer of the tyrannical demon Mahishasura.

Katyayani Devi is one of the popular forms of Goddess Durga and she is worshipped on the sixth day of Navratri in many regions. She got the name Katyayani as she was born in the Katya clan as the daughter of Sage Katya. A popular Vrata known as Sri Katyayani Vrat is observed by women to get ideal husbands in the month of Margshirsha.

She is one of the nine Durgas or Nav Durgas worshipped during Navaratri. Details about Katyayani Devi are found in the Matsya Purana, Agni Purana and Vamana Purana.

Katyayani Devi was a popular deity during the period of Hindu God Krishna. She was worshipped by Gopis and Gopas in Gokula. An image of Sri Katyayani Devi used to be made using the clay and mud from the Yamuna River and was worshipped for a month. This was known as Katyayani Vrata. At the end of the month, the idol is immersed in Yamuna. Such a Vrata is performed in Tamil culture known as Margali Nombu in Margazhi month.

Katyayani Devi is depicted as having four or eight or ten or eighteen arms. She carries different arms presented by Devas and the Trimurtis. Some scriptures mention that she has the combined power of Brahma, Vishnu and Shiva. Her body color is said to be that of Atasi flower (sky blue or violet blue).

Her Vahana or vehicle is believed to be Sardula – a mythical animal regarded as the mother of tigers. In some texts, she is shown along with a lion. Some scriptures indicate that she is youthful and is bedecked with ornaments. She wears a crown with a crescent moon stuck to it.