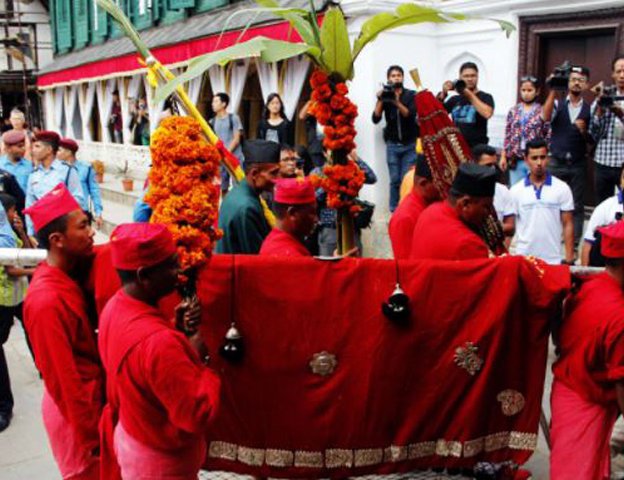 The festival of Fulpati was celebrated with traditional gaiety and religious fervour in various parts of Nepal today.

Fulpati is observed on the seventh day of Dashain festival. In Nepali,"Phool" means flower and "Pati" means leaves and plants. There is a tradition in Nepal to bring nine types of Fulpati into the home on seventh day of Navaratri. It is believed that Fulpati represents nine Goddess and they brings health, wealth and prosperity to the homes.

The tradition started during the period of King Prithvi Narayan Shah. The main function was held at Basantpur Durbar Square in Kathmandu, where Fulpati was brought to Dashainghar from Jamal in a traditional procession with vedic rituals. On this occasion a special parade was also held at Army Pavilion in Kathmandu. President Bidya Devi Bhandari, Vice President Nanda Bahadur Pun, Prime Minister K.P. Sharma Oli, Heads and representatives of diplomatic missions, senior army and government officers attended the programme. Dashain is the biggest festival of Nepal.

It began on last Wednesday with first day of Navratri but festive fervour gained momentum from Fulpati. All government and private offices have been closed till Saturday. More than 21 lakh people have left Kathmandu valley to celebrate Dashain at their native places with family, relatives and friends.

Dashain is a festival of harmony. It is a festival of unity. Overall, it is a part of our way of life. From Ghatsthapana, Dashain begins duly. Tick ​​on the tenth day of gestation. That is the day to get vaccinated from relatives, Ganyamanya. This is called Vijaya Dashami. It is also a triumph of victory. The victory of truth over untruth.Fulpati

Every day since the beginning of the decade has its own significance and meaning. It is not only associated with religious traditions. It also has a formula for making our way of life pleasant and loving. Dashain-culture inspires us to laugh and live in harmony with society, a sober and balanced life.Fulpati

After bringing flowers in every house, the dawn of the decade begins. According to the classical method, flowers are brought in as a symbol of good fortune.It is customary to worship nine types of leaves like banana, pomegranate, paddy, haldi, mane, karchura, vine, ashoka and jayanti and bring them to the place of Durga Puja at the rate of each bunch .Fulpati

In these nine leaves, Brahmani, Rakchachandika, Lakshmi, Durga, Chamunda, Kalika, Shiva, Shokaharini and Karthiki Devi are worshiped one by one with sixteen ingredients.

On this day, flowers are brought from Dashainghar of Gorkha Durbar and brought to Hanumandhoka. It is customary to bring six people of Magar caste from Gorkha to Jeevanpur of Dhading district including the priests of Dashaingharas. After that, there is a tradition of bringing six Brahmins from Jeevanpur of Dhading district to Jamal of Kathmandu.Fulpati

From Jamal to Hanuman Dhoka, high-ranking civil servants, Gurju’s platoon, band baja, panche baja, decorated kalsyundi and cultural dance songs are brought along with long line .It is said that after the unification of Nepal as a fragmented state, the flowers picked from Gorkha were taken to various Shakti Peeths of the country. It was customary to bring flowers from Gorkha to Dashainghar in the temple of Taleju Bhavani in Hanumandhoka, Kathmandu, through Jeevanpur in Dhading district.

The priests of the Gorakhkali temple at Gorkha Durbar, Kalsheni, Mangaleni and Bhitriya Susare prepare flowers. On the day of Ashwin Shukla Pratipada, Ghatsthapana is performed by invoking Bhagwati. Along with this Ghatsthapana, there is a classical law to worship Bhagwati and keep the deposit of Durgavati’s beloved barley.

In Sanskrit, Jamara is called Jayanti. One of the names of Bhagwati is Jayanti. After performing the ritual worship, the courtiers send the doli with flowers to Kathmandu at the auspicious site in the morning.

There is a tradition of bringing flowers from Gorkha to Jeevanpur of Dhading district by six people of Magar caste including the priest of Dashainghar of Gorkha Durbar and from Jivanpur to Jamal by six people of Brahmin caste from Kathmandu.

From Jamal to Hanuman Dhoka, high-ranking civil servants, Gurju’s platoon, Nepal Army’s band baja, panche baja and cultural dance songs are brought along with lavalaskar. It is customary to bring in flowers in the evening after reaching the Hanumandhoka palace.

As a flower, nine types of leaves including banana, pomegranate, paddy, haldi, mane, karchur, vine, ashoka and jayanti are worshiped and brought to the place where Durga is worshiped at the rate of nine each.