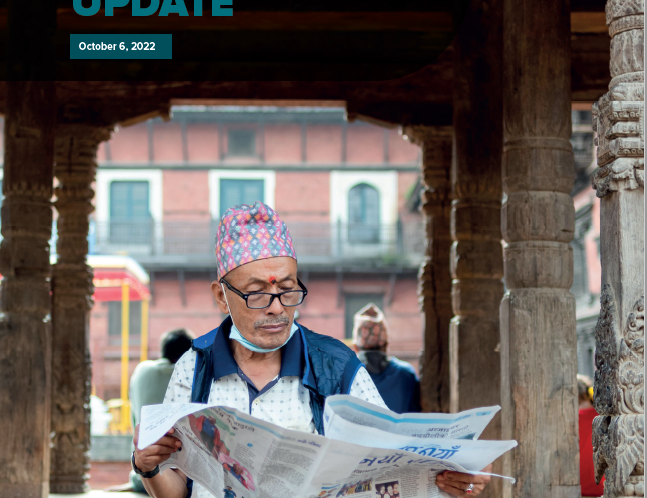 KATHMANDU, October 7, 2022—Nepal’s economy is expected to growat a rate of 5.1 percent in FY2022/23 and 4.9 percent in FY2023/24, reflecting monetary policy normalization, the end of pandemic-era monetary support measures, and still relatively high commodity prices according to the World Bank in its latest macroeconomic update. A rebound in tourism is projected to support Nepal’s services sector and industrial growth is expected to be strong due to increased hydroelectricity production.

While public debt levels are expected to stabilize and pressure on foreign exchange reserves is projected to ease, Nepal continues to face structural challenges relating to a modernization of the tax system, the attraction of new sources of foreign exchange (especially FDI) and full implementation of fiscal federalism that need to be addressed to ensure sustainable and inclusive growth.

Released today, the latest South Asia Economic Focus, Coping with Shocks: Migration and the Road to Resilience, projects regional growth to average 5.8 percent this year - a downward revision of 1 percentage point from the forecast made in June. This follows growth of 7.8 percent in 2021, when most countries were rebounding from the pandemic slump.

While economic distress is weighing down all South Asian countries, some are coping better than others. Exports and the services sector in India, the region’s largest economy, have recovered more strongly than the world average while its ample foreign reserves served as a buffer to external shocks. The return of tourism is helping to drive growth in Maldives, and to a lesser extent in Nepal—both of which have dynamic services sectors. The combined effects of COVID-19 and the record-high commodity prices due to the war in Ukraine took a heavier toll on Sri Lanka, exacerbating its debt woes and depleting foreign reserves. Plunged into its worst-ever economic crisis, Sri Lanka’s real GDP is expected to fall by 9.2 percent this year and a further 4.2 percent in 2023. High commodity prices also worsened Pakistan’s external imbalances, bringing down its reserves. After devastating climate-change-fueled floods submerged one-third of the country this year, its outlook remains subject to significant uncertainty.

Inflation in South Asia, caused by elevated global food and energy prices and trade restrictions that worsened food insecurity in the region, is expected to rise to 9.2 percent this year before gradually subsiding. The resulting squeeze on real income is severe, particularly for the region’s poor who spend a large share of their income on food.

South Asia’s migrant workers, many of whom are employed in the informal sector, were disproportionately affected when restrictions to movement were imposed during COVID-19. However, the later phase of the pandemic has highlighted the crucial role migration can play in facilitating recovery. Survey data from the South Asia Economic Focus suggests that in late 2021 and early 2022, migration flows are associated with movement from areas hit hard by the pandemic to those that were not, thus helping equilibrate demand and supply of labor in the aftermath of the COVID-19 shock.

“Labor mobility across and within countries enables economic development by allowing people to move to locations where they are more productive. It also helps adjust to shocks such as climate events to which South Asia’s rural poor are particularly vulnerable,” said Hans Timmer, World Bank Chief Economist for South Asia. “Removing restrictions to labor mobility is vital to the region’s resilience and its long-term development.”

To this end, the report offers two recommendations. Firstly, cutting the costs migrants face should be high on the policy agenda. Secondly, policymakers can de-risk migration through several means including more flexible visa policies, mechanisms to support migrant workers during shocks, and social protection programs.

Also released today, the Nepal Development Update contains a special focus on The Macroeconomic Impacts of Climate Change. Nepal is highly vulnerable to climate change and must adapt to global warming, even though it is a negligible contributor to global greenhouse gases. New World Bank analysis presented in the Update finds that negative impacts are expected to accelerate sharply in the second half of the century, with GDP contracting 24 percent relative to the baseline projections by 2100. A list of 32 actionable steps that Nepal can take now to reduce these impacts and reinforce its Green, Resilient, and Inclusive Development (GRID) pathway is provided in the recently released Nepal Country Climate and Development Report.

“Nepal’s GDP and other macroeconomic losses in the first three decades of the 21stcentury are small to begin with, but are expected to accelerate quickly in the second half of the century as temperatures and climate events reach higher levels of intensity,” said Faris Hadad-Zervos, World Bank Country Director for Maldives, Nepal, and Sri Lanka. “These findings underscore the urgency of implementing measures aligned with the country’s Green, Resilient, and Inclusive Development (GRID) pathway, to increase Nepal’s adaptive capacity to climate-related shocks.”