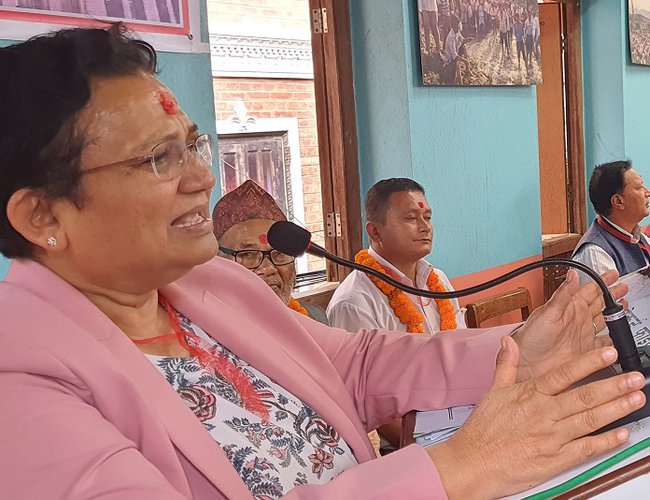 Minister Bhusal informed that Nepal will soon formulate a policy on hydrogen energy and move forward.

She said that the issue of converting water resources into hydroelectric energy and using hydropower to develop water resources as green hydrogen is very important for economic prosperity, environmental security, energy and food security as well as sustainable development of Nepal.

Minister Bhusal said that the government's goal is to use hydropower as a source of energy, increase per capita electricity consumption, and also use hydropower to produce hydrogen energy, ammonia and urea.

She said that in order to achieve this goal, the Ministry has formed a working group and has already conducted a pre-feasibility study of hydrogen and chemical fertiliser production through the use of hydropower.

She said, "An agreement has been reached between the Nepal Electricity Authority and Global Green Growth Institute of Korea at the initiative of the ministry to forward the work for the development of hydrogen energy.

She said that in order to achieve the goal of sustainable development within 2030 and to achieve the national goal of reaching a middle-income country by 2026, the government has emphasised on rapid development of hydropower projects, including agriculture, tourism and industrial sectors.

Minister Bhusal said, "The government is working with an action plan to create a competent, strong and advanced nation by means of industrialisation, electric transportation, drinking water and irrigation through lift and electronic materials." She said that the suggestions obtained from this first summit on green hydrogen will be useful to further formulate the policies, guidelines, and laws that we will adopt in the future.

On the occasion, President of MIT Group Foundation Dr. Shesh Ghale has said that it is necessary for Nepal to lead the world in hydrogen energy production.

A global study has shown that Nepal can produce green hydrogen and sell it at a benchmark price on the world market, he said and added that now Nepal should take global leadership in the development of green hydrogen.

Nepal should now be ready for the journey from hydroelectricity to hydrogen, he said and added that all sectors should be ready for cooperation and investment and the state should also facilitate policy.

NADA Demands To Allow Import Of All Vehicles And Concessional Loans By NEW SPOTLIGHT ONLINE 10 hours, 6 minutes ago

MCC-Nepal Issued An Tender For The Construction Of a Transmission Line By Agencies 4 days, 10 hours ago