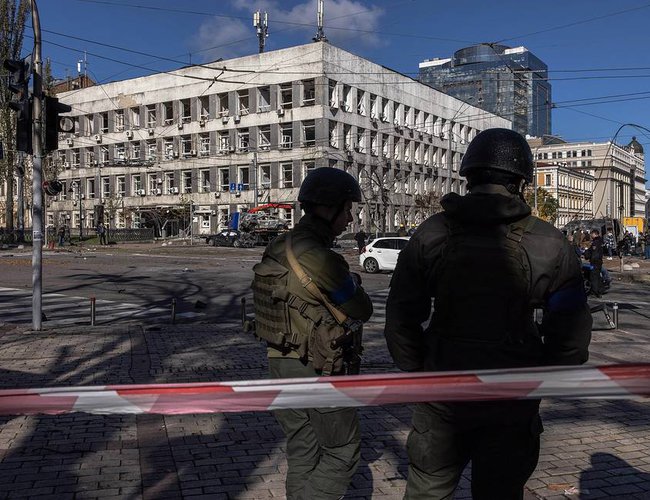 Russian missiles slammed into Kyiv and other parts of Ukraine on Monday, leaving 11 people dead and causing damage to the country's infrastructure.

The Ukrainian capital and the western region of Lviv were among the areas hit by Russian missiles.

Ukrainian police said 87 people were injured in the massive attacks nationwide, and that about 70 sites, including power generation and other infrastructure facilities, were damaged.

Russian President Vladimir Putin confirmed that a massive strike was carried out on Ukrainian energy, communications and military infrastructure, and warned Kiev that, if Ukrainian authorities attempt to continue carrying out terror attacks on Russian territory, responses will be brutal.

Putin said the attacks were in retaliation for Saturday's explosion on a key bridge linking Russia and Crimea. He criticized the blast as an act of sabotage by Ukrainians.

Putin said, "There have been a number of other terrorist attacks and attempts to commit similar crimes against electricity generation and gas transportation infrastructure facilities in our country."

Putin added, "In the event of more attempts to stage terrorist attacks on our territory, Russia's response will be harsh and commensurate with the threats posed to the Russian Federation. Nobody should have any doubts about that."

In a statement, US President Joe Biden said, "They once again demonstrate the utter brutality" of Putin's "illegal war on the Ukrainian people." Biden spoke by telephone with Ukrainian President Volodymyr Zelenskyy and pledged to "continue providing Ukraine with the support needed to defend itself, including advanced air defense system."