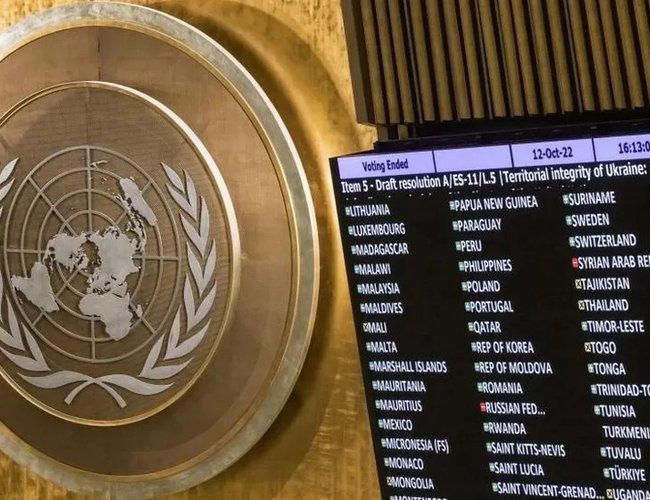 The resolution was supported by 143 countries, while 35 states - including China and India - abstained.

Although symbolic, it was the highest number of votes against Russia since the invasion.

Last week, in a grand ceremony in the Kremlin, President Vladimir Putin signed documents to make the eastern Ukrainian regions of Luhansk, Donetsk, Zaporizhzhia and Kherson part of Russia.

The agreements were signed with the Moscow-installed leaders of the four regions, and came after self-proclaimed referendums in the areas that were denounced as a "sham" by the West.

The resolution calls on the international community not to recognize any of Russia's annexation claim and demands its "immediate reversal". It welcomes and "expresses its strong support" for efforts to de-escalate the conflict through negotiation.

Ukraine's President Volodymyr Zelensky said he was grateful to the countries that supported it.

"The world had its say - [Russia's] attempts at annexation is worthless and will never be recognized by free nations," he tweeted, adding that Ukraine would "return all its lands".

The General Assembly vote was triggered after Russia used its veto power to prevent action at the Security Council - the body in charge of maintaining international peace and security.

With report from BBC

New Data On Nepal PLHIV Stigma Index 2.0 Indicates The Need To Create Arespectful And Equal Environment For PLHIVs In Community And Workplace By NEW SPOTLIGHT ONLINE 3 hours, 48 minutes ago