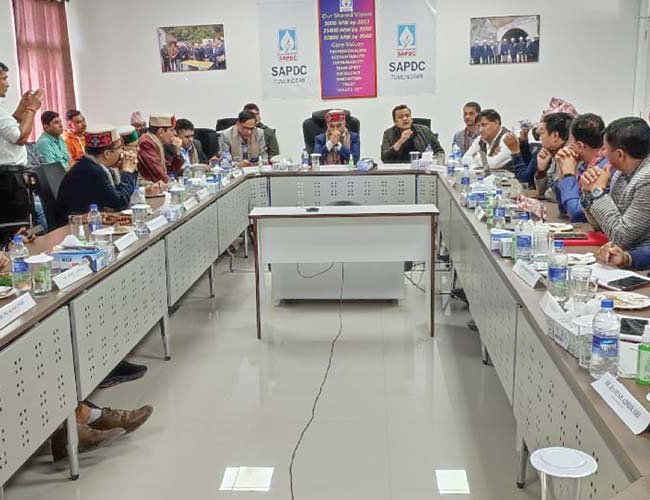 High-level monitoring has been conducted regarding the progress of the 900 MW Arun III Hydropower Project, which is under construction as a game changer.

The visit, which was led by Chief Secretary Shanker Das Bairagi, included other government secretaries, Chief Executive Officer of Investment Board Nepal and other high-ranking officials and representatives of project developer companies.

According to the Investment Board Nepal, during the visit, an interaction was held in Sankhuwasabha and Dhanusha with the local levels, local administration and other stakeholders by monitoring the site of the project's dam site, power house and transmission line area.

In the interaction programme, the developer raised the issue of completion of the Arun III Hydropower Project and the transmission line in time, as well as the local concerns of the project-affected areas.

Chief Secretary Bairagi has directed to complete the under construction 900 MW Arun III Hydropower Project within the stipulated time.

He instructed all the agencies to solve the obstacles, problems and facilitate the implementation of the hydropower project.

Chief Secretary Bairagi instructed to implement environmental and social responsibilities and various local benefit schemes to be fulfilled by the developer within the timeframe.

Stating that the Arun III Hydropower Project is a model project under construction with foreign direct investment, CEO of IBN Shshil Bhatta said that it should be completed effectively and within the stipulated time through inter-agency coordination and convey the message that there is an investment-friendly environment in the country.

He appealed to all the stakeholders for the necessary support to complete the project as soon as possible, as the local residents and the government will get direct and indirect benefits from the project.

MCC-Nepal Issued An Tender For The Construction Of a Transmission Line By Agencies 8 hours, 5 minutes ago

Make In Nepal Products Will Be Promoted: Secretary Gyawali By Agencies 4 days, 8 hours ago