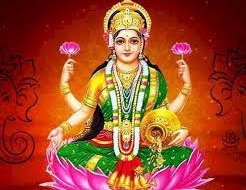 According to Hindu mythology, the goddess Lakshmi is renowned as the goddess of wealth, good luck, success and grace. Known as the wife of Lord Vishnu, Lakshmi gives gifts and blessings to her devotees.

During the day of Lakshmi Puja, worshippers cleanse and beautify their houses. They adorn their homes with shiny lights, candles, and torans and prepare sweets.

According to devotees, Lakshmi blesses families with wealth and health the happier she is with the visit. In Bengal, Lakshmi Pooja or Lokkhi Pujo is very popular and usually celebrated with great pomp and show. During Sharad Purnima, the full moon after Vijaya Dashami. The same ceremony is also known as Lokkhi Pooja. On the evening of the festival, women cleanse their houses and decorate the floor with alpona or rangoli.

There is a belief that the worship of Lord Ganesh and Goddess Lakshmi is an essential part of any puja ritual in Hinduism. Prayer to Goddess Lakshmi for success and prosperity is customary before beginning any new venture.

Diwali is one of the most important festivals in the Hindu religion and any festivity or celebration is incomplete without Ganesh and Lakshmi Pooja.

Hope the upcoming Diwali brings positivity to you. Curious! How coming days will be? Get a free janampatri report.

Traditions To Be Followed For Lakshmi Puja

The Lakshmi Puja festival occurs during the full moon of the month of Ashwin in Assam, Odisha, Tripura and West Bengal.

Popularly known as Kojagari Lakshmi Pooja or Bengali Lakshmi Puja, this puja is observed in certain parts of India and Nepal after Diwali.

Traditionally, Kojagari Lakshmi Puja is celebrated after Vijaya Dashami and before the immersion of Goddess Durga.

Goddess Lakshmi is regarded as one of the most popular Hindu deities and is known as the goddess of wealth and fortune. The word Lakshmi has been originated from the Sanskrit word Lakshya which means an aim or goal.

According to mythology, Lakshmi is the daughter of the goddess Durga and Vishnu’s wife. During Kojagari Purnima, devotees observe a fast and perform rituals.

Kojagari word has been originated from the phrase ‘ko jagorti’, which means ‘Who’s awake? As per tradition, on the day of Ashwin’s full moon, Goddess Lakshmi descends on Earth to view mortal actions and ask “Who are you today?” When one answers her, they receive divine blessings.

It is believed that during Lakshmi Puja devotees draw footprints of the Goddess to welcome her into their homes.

Offers financial solutions to all issues.

Get rid of all the challenges related to your career and business.

It helps you become successful in both your professional and personal endeavours.

Performing Lakshmi puja at home is a powerful way of obtaining success, wealth, and prosperity.

With Lakshmi Puja, you will also be gifted with beauty and intelligence.

Goddess Lakshmi is worshipped on Dhanteras day, which occurs two days before Diwali. Lakshmi Pujan is performed on Dhanteras Diwali. On the full moon day of the lunar month of Ashwin, Goddess Lakshmi is worshipped in West Bengal, Assam, Odisha and Tripura. The tradition of Lakshmi Pooja in West Bengal is called Lokkhi Puja or Lokkhi Puja and is observed on the first full moon after Shardiya Navratri, Sharad Purnima or Kojagiri Purnima. On Vijaya Dashami (Dussehra), Kojagari Lakshmi Puja is celebrated.

Why To Offer Lotus Flower During Lakshmi Puja?

Laxmi is the Hindu deity who represents good fortune. According to Puranas, Goddess Lakshmi is the wife of Lord Vishnu and daughter of Goddess Durga. It has been said that she appeared in every avatar of Lord Vishnu, taking different forms.

Goddess Lakshmi not only blesses us with joy and prosperity but also takes our bad times or actions into account. There is a story associated with Goddess Lakshmi here.

Here the story begins with Sage Durvasa and Lord Indra. A garland is presented to Lord Indra by Sage Durvasa as a sign of respect. Indra shows disrespect towards Rishi Durvasa. He removed the garland and placed it on the neck of his elephant, Airavat. In an angry rage, Airavat throws the garland to the ground.

Upon returning to his capital city, Amravati, Lord Indra observes the effects of the curse. It seems as though God starts acting strangely. Plants and other living things start dying. Demons take over Amravati so it becomes a land of evil.

Moreover, the Demons invaded the area of Amravati, after the deities’ virtues had turned against them.

Indra seeks a remedy from Lord Vishnu. Lord Vishnu says that the only way to solve this problem is to churn the ocean. Churning the ocean brings out Amrit, which the gods will consume to become immortal.

The ocean began to churn. There was a war between the Gods and the Demons. Goddess Lakshmi emerges from the churning seated on a full-blown lotus. Now while the choice rests on Goddess Lakshmi to choose, she chooses Lord Vishnu as her master and thus comes on the side of the Gods. Now that the gods had their powers back, it was easier to defeat the demons. Thus, the Gods triumphed over the Demons.

By coming on the side of the Gods, Goddess Lakshmi enabled them to perform good work, be polite and helpful, regain their energy and be at peace mentally. Accordingly, Goddess Lakshmi provides both material and mental well-being.

Traditionally, Goddess Lakshmi is offered a very specific bhog or food. Bhaja, which includes several kinds of fried vegetables, is offered to the Goddess along with Khichuri. Dishes made up of peas and cauliflower are also included in Bhog. Til laddoos and coconut ladoos are must-haves. All the food items that women cook during Lakshmi Pooja are either served on banana leaves, earthen pots, or metal plates and bowls.

Hopefully, the articles listed above have provided you with useful information about Lakshmi Puja. For instructions on how to perform Lakshmi Puja online, please contact our Lakshmi Puja pandit.