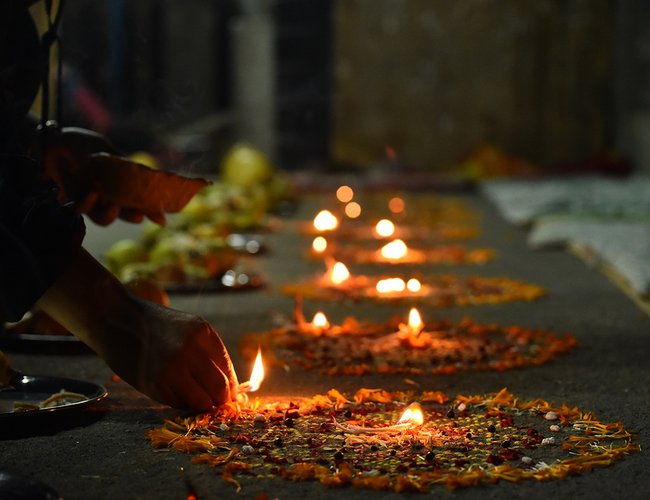 The Nepal Sambat New Year 1143 is being celebrated across the country by organizing various programmes. Similarly, the Mha Pooja ritual is being observed by people of the Newar Community today on the fourth day of Tihar.

Mha Pooja literally refers to self worship, making offering to one’s body, highlighting on respecting the self. It also falls on the Newari New Year which is based on the Newar calendar, Nepal Sambat.

The National Luminary, Shankhadhar Sakhwa is credited with initiating the Nepal Sambat in 880 AD by freeing the poor from their debt during the reign of the Lichhavi dynasty king Raghav Dev.

Historian Dr Triratna Manandhar said that the Nepal Sambat calendar was recognised as the state calendar until the reign of King Prithvi Narayan Shah.

According to Manandhar, the Shaka Sambat calendar was in use before the Lichchhavi rule. "The Nepal Sambat is a unique calendar of Nepal as it has been named after the country's name," he said.

Mha puja and the New Year lie on the same date. It is the fourth day of Yamapamchak Tihar. On this date, the Newa people from all over Nepal celebrate the Lunar New Year. According to the found pieces of evidence, Nepal sambat was founded on October 20, 879 AD during the reign of Thakuri king, Raghavadeva. And, people celebrate it in their own way. Like, wearing the Newa attire and go for the rally and all.

Mha Puja Mha puja is an annual ritual performed by the newar community of Nepal which means worshipping oneself.

Generally, Mha Puja is done in the evening or in the afternoon, somewhere at night, just to make sure that Mha puja of Aagandya ( the family goddess) and the goddess Taleju Bhawani of the three cities of Kathmandu Valley has already been conducted by the high Newar priests or not.

The significance of Mha Puja Mha puja seems very important because this ritual is done for the purification and empowerment of the soul as a part of the New Year celebration. The fourth day of the five-day sequence, and the middle day of the focal ultimate three days, the lunar New Year’s Day itself, and the first day of the waxing fortnight Kachalathwa is the day of Mha Puja.

Mha Puja, which is also one of the pieces of the Swanti sequence. But the Newa people consider it to be very precise that other than Newa people do not celebrate it.

What does Maha Puja mean?

Mha means a body that apparently represents the dynamic seat of each individuals living in the family. Essentially, Mha Puja is the worshiping of each member of the family too. And that act is done by the superior active woman of the household. Mother or grandmother, they are called Nakin.

Basically, the elements that are used in Mha Puja are almost the same for all Newars even the procedural details. However, some rituals may vary from family to family. Besides, it’s almost the same.

For Mhapuja, a mandala is a must and should be drawn on a refined surface of the floor that each for the members of the family. It should be made for those family members too who are momentarily absent, and thus are worshiped in absentia.

In that sense, the mandalas depict the human or pet’s body. Mandalas are all decored by unhusked rice, into some five piles. It is believed that it represents the five major elements.

Elements like, earth, water, fire, air, ether of which the human body is supposed to be formed and into which it is terminated. But this is not the fact cause of which I like mandalas. It should start and end as a circle. However, the mandala is swept up, somewhere before, somewhere after the sagun is given, depending on the family custom. In our place, it is done after the feast.

Then, a covering of leaves is placed over those piles, and various offerings are arranged on it, such as beaten rice, water, ceremonial threads like kwokha, flowers, incense, lamp threads. With that, the fruits, at least of five types, if possible.

The eldest female member i.e. the nakin of the family worships each member of the family. There, she starts it first from males, then to females, in order of descending age. She does repeat the same sequence for each family member. Then, she begins putting tika on each member of the family, offerings threads, flowers, garlands, sweets, and fruits to them. She holds a traditional urn, something similar that used in kuchi bhwey, measuring equipment, where she puts some flowers, mutumari (a traditional newari dish specially prepared for swanti), and other minor ingredients and touches the foot, shoulders, and head from that urn before pouring all those things on our head. It literally feels like flowers falling for us from the sky.

Next, she offers the meat and fish containing the mixture, samhae to each family member, which after the feast begins as nourishing to ensure long life and good fortune for the family members. Things that you might not know about the Mha Puja Married daughters are not allowed to perform this puja. And there are only a few newars who don’t perform this ritual or the festival.

The Buddhists Newars also observe the puja as an auspicious start to gain the 32 Lakshana (features) of Buddha through principles and good deeds. The mandala symbolizes the world and the fruits and Sagun symbolizes the offerings made by the earth. Leave a Reply Your email address will not be published.