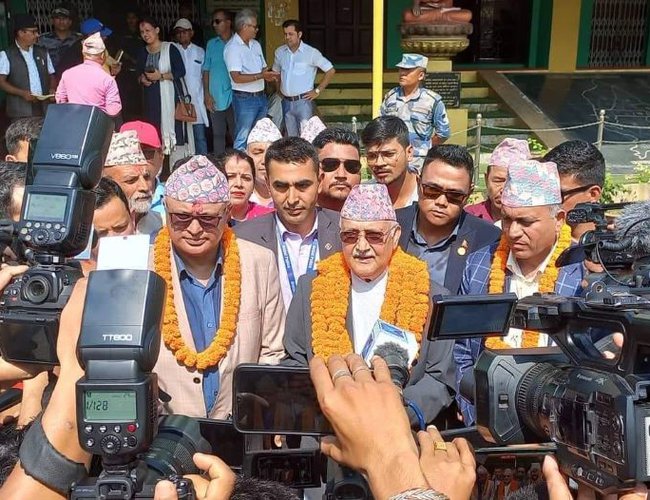 CPN (UML) Chairperson KP Sharma Oli asserted that upcoming November 20 parliamentary elections should not be taken as an ordinary election.

Addressing an election assembly by his party in Bhaktapur constituency no 2 on Tuesday, the former Prime Minister viewed that the upcoming elections should be acknowledged victory for the country rather than the one keeps taking place periodically in multiparty system.

The septuagenarian leader further said, "The upcoming election is going to form a government that will run permanently for five years. This election is a medium to build a strong national force."

Directing the party cadres and leaders to defend and expand the vote base, he instructed them to elect their party candidates with overwhelming votes.

Also speaking at the programme, Mahesh Basnet, Bhaktapur constituency no 2 candidate for House of Representatives member, asserted that the development works delivered in the past five years were the model work for the country,

He pledged to deliver on the remaining development works upon being elected in the upcoming election. (RSS)

New Data On Nepal PLHIV Stigma Index 2.0 Indicates The Need To Create Arespectful And Equal Environment For PLHIVs In Community And Workplace By NEW SPOTLIGHT ONLINE 4 hours, 49 minutes ago