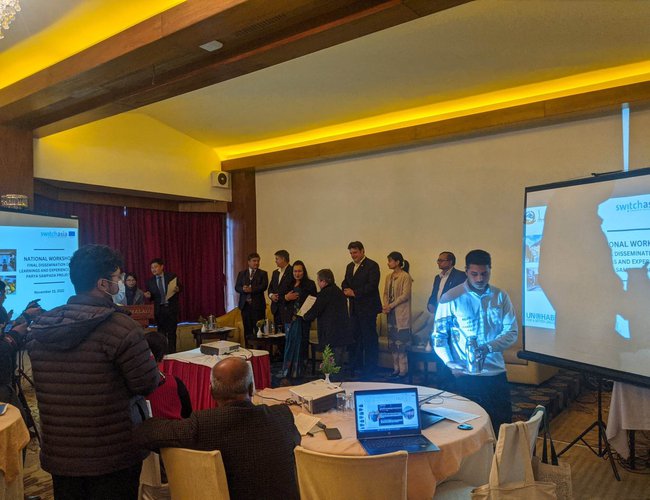 Addressing a project closing workshop, the deputy mayor thanked European Union and UN-Habitat for helping Municipality to restore the old settlements in Pilachhe and Bungmati.

Under the EU-Switch Asia Project, UN-Habitat has implemented the project “Sustainable Tourism and Green Growth for Heritage Settlements of Kathmandu Valley” since 2018. There were three major areas of intervention like green growth and heritage conservation, community participation and institutional strengthening and promotion of sustainable tourism through local livelihood enhancement. 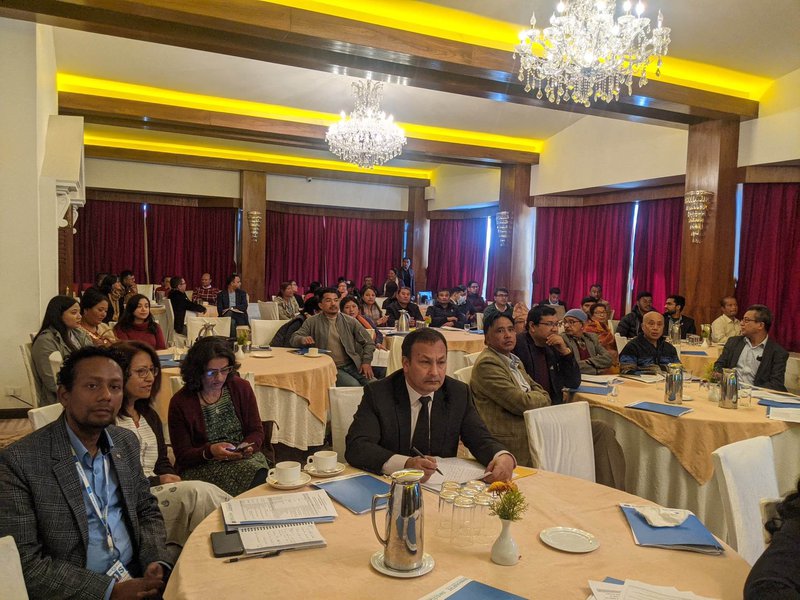 She said that the project achieved its objective of the green rebuilding of Bungamati with a focus on Sustainable Heritage Tourism. She said that the municipal and community capacity enhanced in green development planning and procurement, tools for green buildings and heritage conservation developed and green tourism promoted.

The Deputy mayor holds the view that Praya Sampda is an exemplary project driven by the support and participation of the local community aiming to improve livelihood by reviving traditional practices.

The Deputy mayor also thanked the ambassador of the European Union to Nepal Nona Deprez and her team for effective coordinative roles to complete the project on time.

“LMC is grateful to the EU for funding such an important project which can be replicated throughout the country to restore the settlements in a sustainable way,” said Deputy Mayor Bajracharya.

Attended by a large number of stakeholders from the project areas, participants shared experiences and successful programs in a half-day workshop. Dr. Marco Gemmer, counselor and Head of Delegation of the European Union to Nepal, expressed happiness over successfully completing the project and achieving its target.

During the National Workshop, the organizer showcased the achievements and learnings of the project. In addition, different policies drafted related to green, heritage and sustainable tourism will be presented along with a way forward for the stakeholders.

He said that European Union has been providing support to the projects aiming to improve the livelihood of Nepali people. He said that it is the government, local levels and community to carry out the project as per their need.

Dr. Gemmer expressed the hope that the Nepal government, local level and community continue to carry out the

After four years of implementation, the Praya Sampda, Sustainable Tourism and Green Growth for Heritage Settlements of the Kathmandu Valley, project concluded successfully.

Funded by European Union under SWITCH-Asia, UN-Habitat together with Lumanti Support Group has implemented the project in various settlements in the Kathmandu Valley to reconstruct the heritage sites destroyed by the 2015 earthquake and revive the livelihood.

Nawaraj Pyakuryal head of Kathmandu Valley Town Authority (KVPT) said that Praya Project has shown how active participation of the community helps to complete the project a grand success.

Joint secretary from the Ministry of Culture, Tourism and Civil Aviation Dr. Surya Shrestha said that the revival of heritage sites in the old settlement of Kathmandu valley will ultimately boost tourism in Nepal supporting local livelihood.

The former head of UN-Habitat Nepal PS Joshi shed the light on how the project was conceived following the earthquake in 2015 to restore and revive the heritage and livelihood of the old settlements of Kathmandu.

Taking a lead throughout the implementation period, Pragya Pradhan, Habitat Program Manager, shared her own experiences on the project and thanked all stakeholders for supporting the successfully implementing the project. She said that the project demonstrates how heritage settlements like Bungamati can be revived through sustainable tourism.

In his presentation, program officer Prabin Bajrachaya overviewed the project.

He said that the project aimed to promote Sustainable Tourism and Green Growth in Settlements of Kathmandu Valley thereby promoting sustainable development, reducing poverty and contributing towards mitigating climate change.

The overall objective of this project is to promote Sustainable Tourism and Green Growth in Heritage Settlements of Kathmandu Valley thereby encouraging sustainable development, reducing poverty and mitigating climate change. Two specific objectives of this project are:

A long young entrepreneur Serina Maharjan from Bungmati said that the project has promoted entrepreneurship among women and youth. “With SME engagement and investment, product innovation and sector campaigns, the project supported the livelihood of the people,” said Maharjan, an entrepreneur who benefitted form the project.

During the four years period, the project prepared a comprehensive heritage settlement recovery plan and plan for the public amenities of Bungamati and Pilachhen.

Similarly, it provides technical assistance in the rebuilding of private houses as well as facilitates house owners to get subsidized home loans. It supported artisans with traditional house construction skills.

The establishment of the multipurpose training center and enhanced existing cultural museum of Bungamati is a major highlight of the project. Likewise, the project helped to improve public spaces compatible to heritage & tourism focusing on solid waste management.

“The project completed its implementation on 15th November 2022. We have also developed a new monitoring and evaluation mechanism for future projects,” said Arun Rai Monitoring and Evaluation Assistant.

Along with implementing the projects, the project also helped to prepare Municipal green heritage settlement recovery policy guidelines and municipal policy and to prepare a tourism-based entrepreneurship development plan.

At a time when large numbers of youth are facing unemployment, the project helps to build the capacity of youths and women in entrepreneurship skills. Thanks to the project, youth and women-led micro-saving groups formed and mobilized

The project also supported an established network of heritage settlements and promote a sustainable tourism network. As the project came to complete successfully, EU Funded Praya Sampda Project showed how collaboration with the local level, community, government and other organizations can help to restore heritage and support the local livelihood maintaining green growth.

16 Day Of Activism Against Gender Based Violence By NEW SPOTLIGHT ONLINE 6 hours, 49 minutes ago