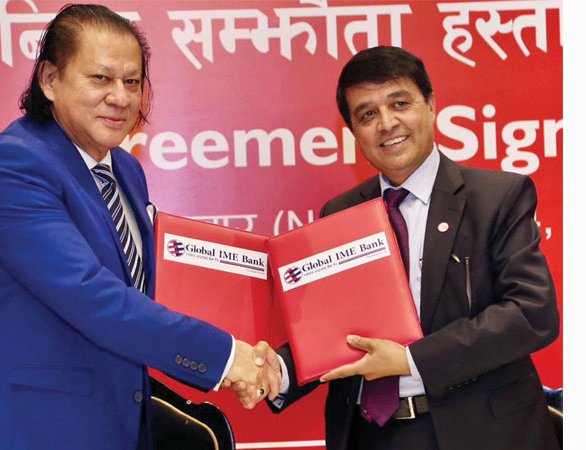 The signing of the final agreement between Global IME Bank and Bank of Kathmandu to merge with each other has been completed.

Previously, the boards of directors of both banks had approved the share swap ratio of 1:1 based on the valuation report of current and fixed assets, liabilities and transactions received from the evaluator for the purpose of merger between Global IME Bank and Bank of Kathmandu.

The new bank formed after the merger will become the largest bank in Nepal in terms of total capital, paid-up capital and business size, it said.

The name of the new bank will be Global IME BoK and the board of directors will consist of five people, including Chairman Chandra Prasad Dhakal on behalf of Global IME Bank and two people on behalf of Bank of Kathmandu.

A total of five commercial banks, 10 development banks and six finance companies will be included in the Global IME BOK, which will be formed by merging 21 banks and financial institutions.

In addition, both banks have earned a net profit of more than Rs. 1.47 billion till the first quarter of the current fiscal year.

Chairman of Global IME Bank Dhakal said that the banking sector will be developed according to the country's needs.

He said that there will be a need for large and powerful banks to invest in large infrastructures, provide financial access throughout the country and reduce banking costs, and the bank that will be formed after the merger will address that.

Stating that Global IME Bank is always the first to comply with the instructions given by the government of Nepal and Nepal Rastra Bank, he said that the final memorandum of understanding of this merger was signed accordingly.

Chairman of Bank of Kathmandu Shrestha said that the role of banks and financial institutions will be important in the economic development and prosperity of the country.

"A big, capable and good bank is needed for economic transformation and economic prosperity of the country. It will be addressed by the Global IME BoK that will be formed after the merger," he said.

NIBL Wins "The Banker" "Bank Of The Year 2022" Award By NEW SPOTLIGHT ONLINE 2 hours, 12 minutes ago

MCC-Nepal Issued An Tender For The Construction Of a Transmission Line By Agencies 3 days, 7 hours ago