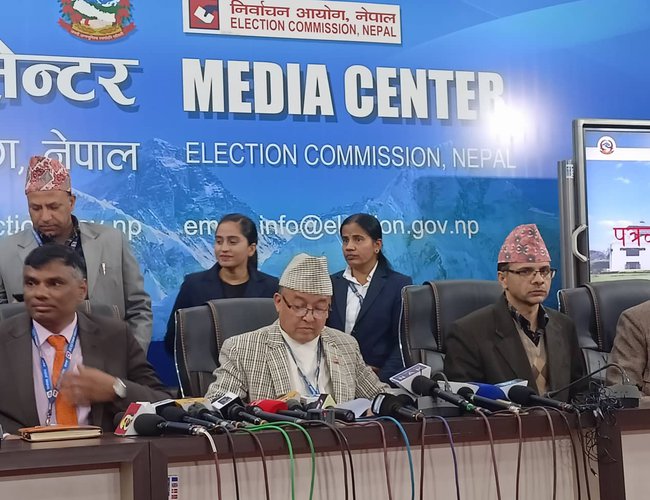 Chief Election Commissioner Dinesh Kumar Thapaliya said that the general elections held mostly quite and peaceful. He said the elections were quiet and peaceful except few sporadic events in a few constituencies.

Addressing Chief Elections Commissioner Thapaliya vote counting will begin tonight following the collection of ballot boxes. He said that the counting of all votes will begin simultaneously. CEC Thapaliya thanked all concerned for supporting EC to hold the election peacefully.

Chief Election Commissioner Thapaliya said that out there were disturbances in few constituencies. All the elections will be held within two days.

The voters’ turnout remained around 60 percent as per the preliminary report of the Election Commission (EC).

The voting that started from 7 am today to till 5 pm for the elections to the House of Representatives (HoR) and provincial assembly are over and the details of the turnout continue to arrive, the EC said.

Voting was conducted in a peaceful and enthusiastic manner across the country, sparing some general incidents, according to the EC. Although the designated voting time is over, the voters who have already entered the polling centers or are within few yards of the centre can cast their voting.

In Madhesh Province, voting was conducted in all polling centers without any postponement.

The voting process was obstructed in some districts such as Bajura, Surkhet, Taplejung, Nawalparasi (Susta Purba), Gulmi and Dolakha after disputes between the political parties and the candidate hopefuls ensued, the EC stated. (RSS)

The EC said that voting was, however, going on in places where the voting started later than the fixed time and it had to be halted owing to dispute and then resumed again, according to the EC.

Shaligram Sharma, the EC spokesperson, said that voters who entered the polling stations as fixed by the election officer by 5 pm can allow the voters to cast vote even after 5 pm. There are 22, 227 polling centers in 10,893 polling stations across the country. According to the EC, cent percent, voter turnout occurred in 141 temporary polling stations.

The EC is holding a press meeting at 7:30 this evening to brief the media about the voting.

World AIDS Day 2022: The AIDS Response Is In Danger By NEW SPOTLIGHT ONLINE 10 hours, 55 minutes ago