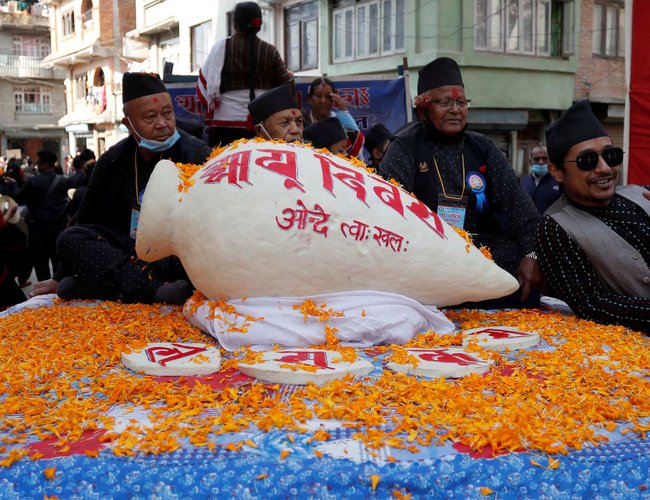 Formal harvesting of paddy is done from Yomari Punhi i.e. full moon. That is why today is also called Dhanya Purnim. Various communities across the nation are celebrating different festivals today, coinciding with the full moon day of the month of Mangsir as per the lunar calendar.

The day is celebrated as the Dhanya Purnima by communities following the Hindu religion, while Newars celebrate the day as Yomari Punhi (or Jyapu Diwas). Kiranti people observe the Udhauli festival on the same day. Dhanya PurnimaDhanya Purnima is a Hindu festival celebrated to mark the conclusion of the rice harvest season across the country. Hindus celebrate the festival by stocking new grain and making offerings to god and goddesses to ensure plentiful supply of grains throughout the year.

Yomari PunhiIn this festival, Kirant people worship land or mother nature which is called Bhumi Puja. They worship mother nature thanking for giving good crops. Udhauli Parva is celebrated with lots of excitement and fanfare. Kirant women wear dress especially made of patterned cloth called Chhit ko Guneu. There is a special kind of dance known as Sakela, playing various musical instruments like dhol, jhyamta, et cetera during this festival.Udhauli mythAccording to the Kirant mythology, Paruhang who used to live in heaven, saw a beautiful girl Sumnima on Earth.

He fell in love with Sumnima and married her. They had four children. But later Paruhang left Sumnima in a hut on the bank of Dudhkoshi River and did not return for a long time. One day, while searching for food, Sumnima saw a creeper on a stone. She tasted the creeper and found out that it was full of power and happiness. She took the creeper with her and made a buti, an intoxicating religious garland out of it. She kept it safely.

The buti inspired everybody, who saw it, to tell the truth of their life. One day, Paruhang returned suddenly. Sumnima gave the buti to Paruhang which made him tell what he had done all those days.So, Sumnima came to know how Paruhang had spent the time looking at the heaven and Earth from the top of Chomolongma (Mount Everest). He told her that he had meditated, and visited the whole universe. Paruhang promised not to leave her, which made Sumnima dance with joy. It is believed the dance is the Sakela Dance. So there is also a tradition of young boys and girls participating in Sakela Dance to meet each other and find love.

The government has announced a public holiday in the Kathmandu valley on Sunday, December 19, on the occasion of Yomari Punhi, Udhauli, Jyapu Diwas and Dhanya Purnima festivals.

The Ministry of Home Affairs says in a statement on Friday that a cabinet meeting held on Thursday made the decision. The ministry says communities celebrating these festivals will also get a public holiday outside Kathmandu also.

Whereas Yomari Punhi and Jyapu Diwas are celebrated by the Newa people, natives of Kathmandu, Udhauli is a big festival of the Kirant community. Many other communities also celebrate different festivals on this day in different ways.

President Bidya Devi Bhandari has extended her best wishes to Nepalis living in the country and abroad on the occasion of Udhauli Parva.

The Kirant community of Nepal, who live in harmony with nature, celebrate Udhauli for 15 days every year in the winter season, a statement issued by President Bhandari stated.

On the occasion, Bhandari also expressed confidence that the festival would promote tolerance, harmony and fraternity in the country and hoped it would strengthen national unity.

Meanwhile, our Urlabari correspondent adds that a cultural programme is being organised this week at Aambari, Urlabari Municipality–9, Morang, to celebrate the great festival called Chasok Tangnam by the Limbu community of the east.

According to the Urlabari branch of the Kirant Yakthung Chumlung (KYC), which is organising the programme, the fair will be held from Thursday to Saturday and will include various events showcasing Limbu culture.

KYC Urlabari chairperson Banu Subba informed that the organisers would perform the traditional Nwagi Puja at the programme and distribute the Prasad to the visitors. Similarly, she said that folk dances like the Kelang Chyabrung, Yewa Lang, Manglak and Dhan Naach would be staged.

Similarly, games and competitions based on Limbu culture, rope pulling, high jump, and long jump will be held, Subba shared.

“Thanks to modernisation and changing lifestyle, the new generation is losing touch with our culture and tradition. That is why KYC is organising the Chasok Tangnam celebration,” she said.

Local Prakash Kandangwa said that Chasok Tangnam is an occasion to offer freshly harvested rice to the patron deity Tagera Ningwaphumang and enjoy it with the family. It is also a festival for young men and women to socialise while playing the Chyabrung, singing the Palam tune and dancing the Dhan Naach.

Limbu elders consider this festival as a symbol of social unity and harmony.

It is an occasion when the nature-worshipping Limbu community do exactly that – worship nature.

Chasok Tangnam is an ancient festival that is believed to have started when the Limbus first adopted agriculture. It is celebrated on the full moon day of the Nepali month of Mangsir, which, this year, falls on Thursday.

Chasok, or Udhauli, as it is also known, is celebrated during the Udhauli season when the sun is on the southern hemisphere. It is also called the Nwagi Festival when the Nwagi Puja is performed by offering new crops to the tribal deity.

Two Shilas Left For Ayodhya From Janakpurdham By Agencies 15 hours, 40 minutes ago