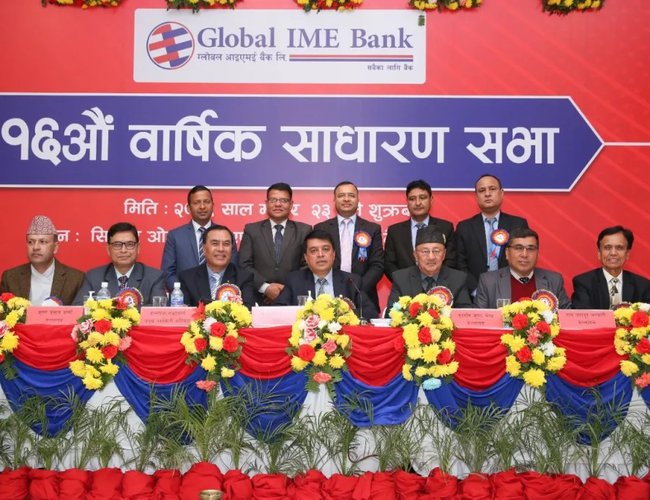 The General Assembly held Friday discussed and unanimously passed the report presented by the Board of Directors regarding the merger of the two banks.

The meeting has approved the share swap ratio of 1:1 determined on the basis of the valuation report (DDA) of fixed and current assets, liabilities and transactions received from the evaluator for the purpose of the merger.

Global IME Bank and Bank of Kathmandu have completed the approval of the merger agreement and other processes related to the merger.

In addition, the meeting has also approved the proposal to increase the authorised capital of the bank by Rs. 25 billion to Rs. 50 billion.

In addition to passing the annual report and integrated financial statement presented by the bank's chairman Chandra Prasad Dhakal on behalf of the board of directors, the general meeting also approved the total profit of the financial year 2021/22 by offering 3 per cent bonus shares and 10.6 per cent cash dividend to the bank's shareholders, totaling 13.6 per cent.

The proposal to give a dividend has been passed.

In the financial year 2021/22, the bank earned an operating profit of Rs. 7.18 billion and a profit after tax of Rs. 4.95 billion. After the proposed bonus share distribution, the bank's paid-up capital will reach Rs. 24.5 billion.

Presenting the annual report in the general meeting, Dhakal said that Global IME Bank is determined to provide reasonable dividends to its shareholders in compliance with the policies announced by the government of Nepal and Nepal Rastra Bank.

He said that the bank will continue to increase in a balanced manner in other areas of business expansion as per its business strategic plan.

Finance Ministry Cut The Budget Of Purchasing Newspapers And Printing Under its Austerity Measures By Agencies 3 days, 1 hour ago