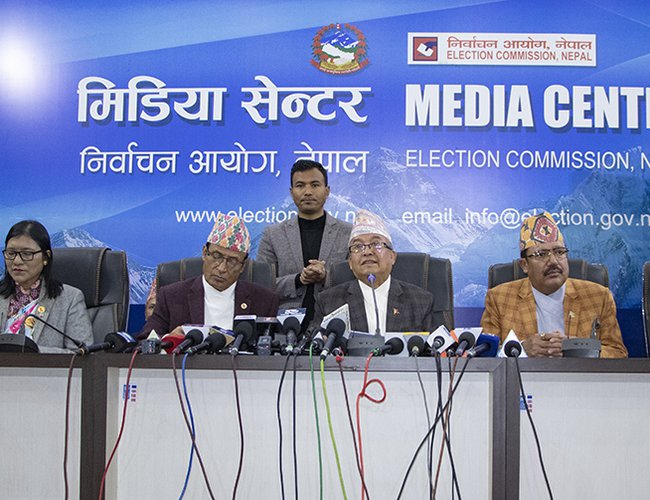 The Election Commission has made public the final results of the November 20 election.

A total of 825 members, 275 of the House of Representatives (HoR) and 550 of the Provincial Assembly (PA), have been elected in the election as per the EC.

In a press briefing organized by EC on Wednesday, Chief Election Commissioner, Dinesh Kumar Thapaliya, said that of the 275 total elected members in the HoR, 184 members, that is 66.90 percent, are males and 91 members, that is, 33.90 per cent, are females.

Chief Election Thapaliya said that 86 parties had given their registration for the HoR election, of which, 61 registered for the first-past-the-post (FPTP) electoral system and 47 political parties registered themselves in the proportional representation (PR) electoral system.

In a closed list, a total of 2,411 candidates, 225 females and 2,186 males gave their candidacy for the HoR election under the FPTP category, while 1, 187 males and 1,012 females making a total of the 2,199 were registered in the final closed list in the PR electoral system for HoR election.

Likewise, 280 females, 2,943 males and one other making a total of 3,224 filed their candidacy for the PA election under the FPTP. 1,511 females and 2,197 males had enlisted themselves for the PA poll under the PR system.

The EC informed that a total of 11,542 candidates filed their candidacy under the FPTP and the PR system of both the HoR and PA elections.

Of the people enlisted in the final voter's list, 450,000 people were listed as temporary voters as per the Voter List Act, 2073, Section 30.

EC thanks governments for accomplishing elections

The Election Commission (EC) has extended thanks to all three tiers of the government for discharging their crucial roles in successfully accomplishing the elections to the members of House of Representatives and Province Assemblies.

Issuing a statement on Wednesday, the Election Commission (EC) thanked the Government of Nepal, province governments, local governments, office of the chief returning officers and returning officers, local administration, employees and security personnel involved in election, political parties and candidates for playing pivotal roles in competing the epochal tasks of carrying out elections.

Also, the election commission has extended gratefulness to all voters for participating in the elections and using their voting rights.