Rahughat Hydel Project To Be Completed By August, 2023

Rahughat Hydel Project To Be Completed By August, 2023 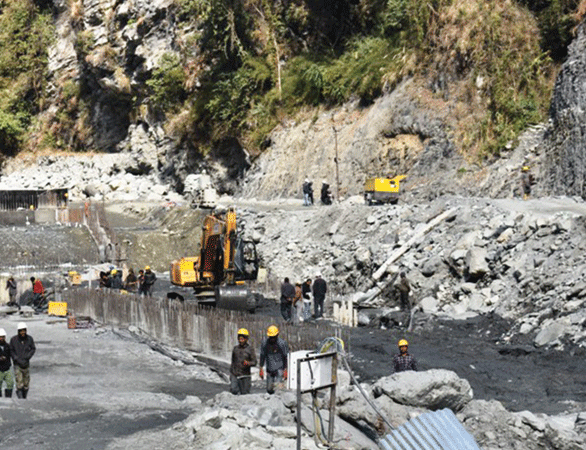 The project manager of Rahughat Hydel Project Raj Bahadur Bista said that work has been accelerated from all aspects of the project to complete by August 2023. The deadline for the construction, which was completed a year ago, has been extended by another two years due to the COVID-19 pandemic, floods and landslides, Bista said.

The construction of the 40 MW Rahughat hydropower project, under construction at Raghuganga Rural Municipality in Myagdi, has gained momentum recently.

He said that the construction of the project has accelerated since October. "We have made the necessary preparations to continue the construction at the dam site even during the summer." A contract agreement was signed with Jaiprakash Associates (JP), the civil contractor for the project.

The project is being built with the joint investment of the NEA and the government and a concessional loan of USD 67 million from the Indian Export-Import (EXIM) Bank. After the expiry of the contract period of 45 months, it has been by two and a half years. The capacity of this project, which was initially designed at 32 MW, has now been increased to 40 MW.

According to the project, 40 per cent progress in physical infrastructure and 50 per cent in finance has been achieved so far.Construction of the tunnel, dam site and power house has been expedited together.

Rahuganga Hydropower Limited, a subsidiary company of Nepal Electricity Authority, which is overseeing the project, has already constructed 3,700m of the 6,270m long tunnel. The project manager Raj Bahadur Bista informed that the tunnel construction was going on through three audits along with the work of digging 180 to 200 meters of tunnel per month.

According to him, 60 per cent physical progress in tunnel work has been made so far. Bista said that the necessary structures were going to be built to continue the construction work at the dam site even during the rainy season.

According to the project, civil contractor Jaiprakash Associates has forwarded the construction of dam, tunnel and power house simultaneously. Around 400 labourers have been mobilised at the project site on a daily basis in addition to sufficient equipment.