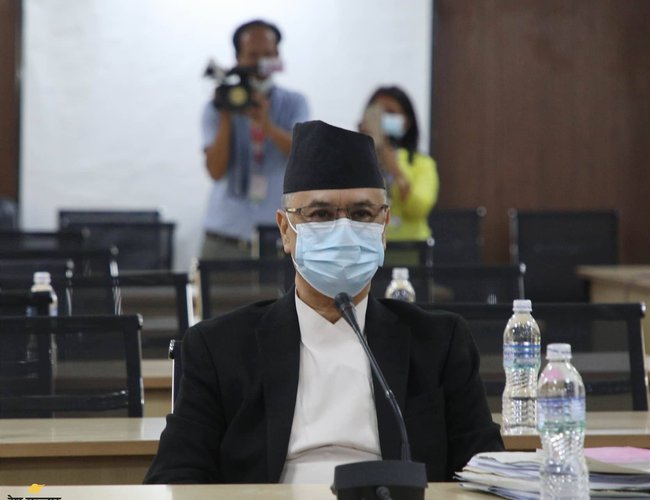 Min Bishwakarma, a member of the committee, told the media that they were considering summoning the people CJ Rana has named, and that he himself could be called again if there were more questions to be asked.

As a two-week-long questioning by an 11-member parliamentary committee has come to an end, Chief Justice Cholendra Shumsher Rana pointed fingers at the prime minister and his fellow judges, alleging their interference in the process has ruined the reputation of the judiciary.

Min Bishwakarma, a member of the committee, told the media that they were considering summoning the people CJ Rana has named, and that he himself could be called again if there were more questions to be asked.

Constitutional positions in the Supreme Court and High Courts for his relatives, the committee has to decide by the end of this week whether to send the matter to the full house with its recommendations to proceed with the impeachment or drop it here.

Legal and constitutional experts are divided as to whether the motion could be carried forward to the next House as the tenure of the current House of representatives will end next week.

Rana alleged that the main reason behind the motion against him was his refusal to step down and make way for Deepak Kumar Karki, the current acting Chief Justice. He also claimed that Dina Upadhyay, a leader of the Nepali Congress, assured him that the motion would be withdrawn if he stepped down and that the proposal was approved by both PM Sher Bahadur Deuba and Maoist Chief Pushpa Kamal Dahal Prachanda.

Incidentally, Upadhyay admitted on Tuesday that she had approached Rana to try for ‘a graceful and dignified settlement’.

Rana also blamed fellow judges, retired and serving, for holding a grudge after he refused to appoint them.

Rana added that the time to register the motion was deliberately chosen as the Supreme Court was going to begin the hearing of a mega land scam, which implicated many, including two former prime ministers — Madhav Kumar Nepal and Baburam Bhattarai.

He also claimed that the chairman of the Bar had approached him to appoint a prominent human right lawyer’s wife as a High Court judge, who was now indulging in an act of vendetta, as Rana refused to do so.

Nepal has adopted a different method of proceeding with an impeachment motion. Except in the case of the President, vice-president and presiding officers of both Houses of Parliament, a petition signed by at least one-fourth of the House and registered in the parliamentary secretariat will lead to the automatic suspension of the person from the post.

While two such motions have been registered in the past 10 years, Rana’s case is the first to move further to an investigation.

The parties, mainly Nepali Congress and the Maoists signed the petition in the first week of March this year, but did not pursue it after Rana’s suspension. It was taken up by the Speaker almost six months later, followed by the formation of the parliamentary committee.

The Speaker yielded to pressure from the main opposition Communist Party of Nepal — Unified Marxist Leninist and the Bar Association— which said it was a deliberate move to keep the motion in pending till Rana’s retirement due on November 13.

Japan Government And UN-Habitat Implement The Project In Nepal, Cambodia And Sri Lanka By NEW SPOTLIGHT ONLINE 2 hours, 46 minutes ago

Incredible Opportunity To Visit Patan Durbar Square In Nepal: US Under Secretary Nuland By NEW SPOTLIGHT ONLINE 6 hours, 3 minutes ago

US Wants To Make Its Collaboration And Strong Economic Relation With Nepal: US Under-Secretary Victoria Nuland By Agencies 12 hours, 29 minutes ago

US Under Secretary Nuland Pays A Courtesy Call On PM Prachanda By NEW SPOTLIGHT ONLINE 1 day, 8 hours ago