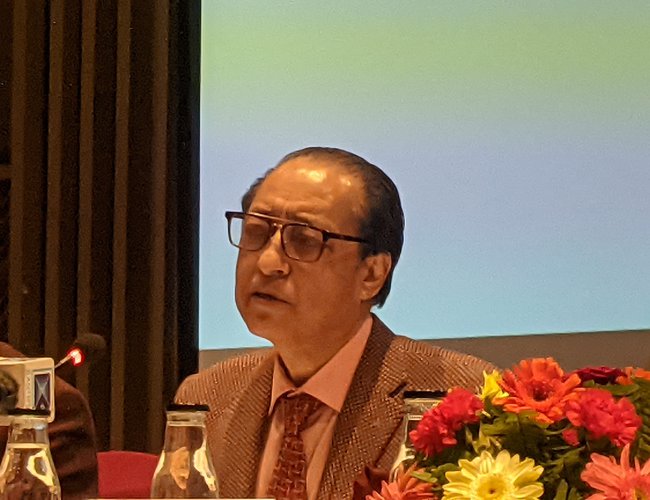 Coincidentally, on the occasion of 301st Prithvi Jayanti and National Unity Day, Prithvi Bahadur Pande, with the same name as the founder of Nepal, inaugurated the joint business of Nepal Investment Bank and Mega Bank, named Nepal Investment Mega Bank (NIMBL), at Hotel Aloft in Thamel. As Prithvi Naryan Shah unified Nepal as a nation to strengthen small states, Pande goal is to unify and strengthen Nepal's banking and financial system.

As it says a healthy banking system is one of the vital parts of a nation's foundation, the choosing the day for finalization of merge is meaningful. 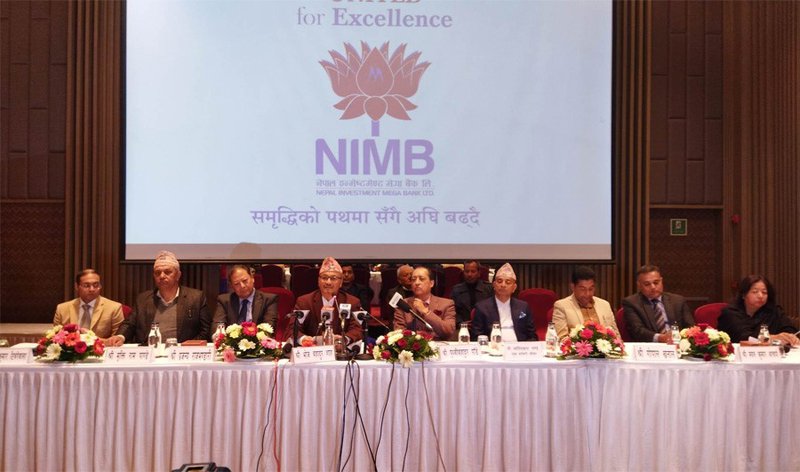 Pande, who is the chairperson of Nepal Investment Mega Bank Ltd, has a strong connection to the national unification process through his family. His family members have made significant sacrifices and contributions to the movement launched by Prithvi Narayan Shah.

As the government observed Prithvi Jayanti, a day to pay respect to the legendary King Prithvi Narayan Shah and those associated with him, and to strengthen national unity, Chairman Pande chose the same day to launch the unification of the bank. He expressed his commitment to strengthening the country's economy and banking sector through this merge.

It is natural for a person like Prithvi Bahadur Pande, the son of a respected civil servant and diplomat Bhim Bahadur Pande, a close family member of late Kaji Kalu Pande, the commander-in-chief and prime minister of King Prithvi Narayan Shah, and Kazi Damodar Pande, a patriotic Prime Minister and commander who led the Gorkha battalion to expand Nepalese territory in the east up to Sikkim, to make such commitments to the country. His family's history and connection to the national unification process and strengthening of the country's economy and banking sector is evident.

As an experienced and respected banker, Pande has a long career in the banking sector starting from Nepal Rastra Bank, General Manager at Rashtriya Banijya Bank, founder chief executive officer of Himalayan Bank Ltd, and Nepal Investment Bank. As the newly elected Chairman of NIMBL, he addressed a large media gathering, outlining his clear thought and vision for Nepal's banking sector in relation to the regional situation and ongoing global economic situation. He justified the merger of Nepal Investment Bank and Mega Bank by explaining the need for change in the context of banking transactions.

Pande, known for regularly contributing to heritage conservation and preservation efforts in Kathmandu Valley, described the future scenario of the banking sector in Nepal and defended the decision of Nepal Rastra Bank's policy of merger as the right decision at the right time. He holds the view that Nepal does not need more commercial banks. 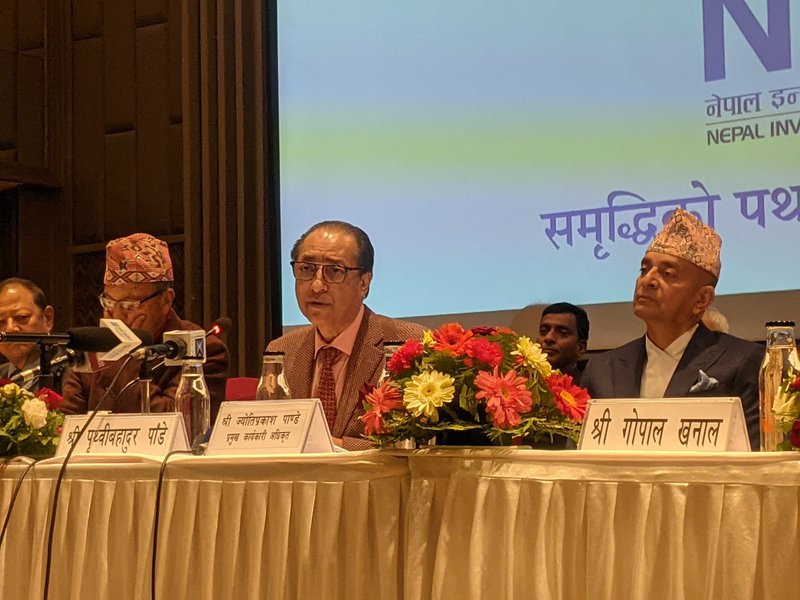 In his inaugural speech at the opening of the joint operation, chairperson Pande, with his humble and realistic words, highlighted the strength and weaknesses of both the bank and the area where they can synergy.

He said that Mega Bank's larger branches and reach to traders and entrepreneurs is added advantage to NIBL. Similarly, NIBL's over 36 years long experience and established reputation and credibility in the banking sector and banking transactions in the country and abroad is unique.

"With our experiences of both the banks, we can provide high quality and professional banking services throughout the country," said Pande.

He said that everybody wishes to be number one and NIMBL is also no exception. After the merger, we are no 1 in some areas and 2 and 3 in others. The vision of the bank will be to remain in the top 3 in the banking sector.

“Today is the new day for the employees of the banks. They have to work in a different scenario and circumstances,” said Pande. Addressing the press meeting, the newly elected chair of NIMBL Pande said that the merger with the Mega Bank will open new investment opportunities.

Chairman Pande also thanked Nepal Rastra Bank for taking a bold decision encouraging banks to merge. “This is the need of the hour to further strengthen the financial sector.”

“The bank is now the no 1 in He said that everybody wishes to be number one and NIMBL is also no exception. After the merger, we are no 1 in some areas and 2 and 3 in others. The vision of the bank will be to remain in the top 3 in the banking sector.

“The bank is now the no 1 in some sectors and no 2 in others. We will aim to remain in the top 3,” declared chair Pande. He said that Nepal needs to go for another round of mergers to shorten the number of banks saying Nepal to limit the number of commercial banks to 7. 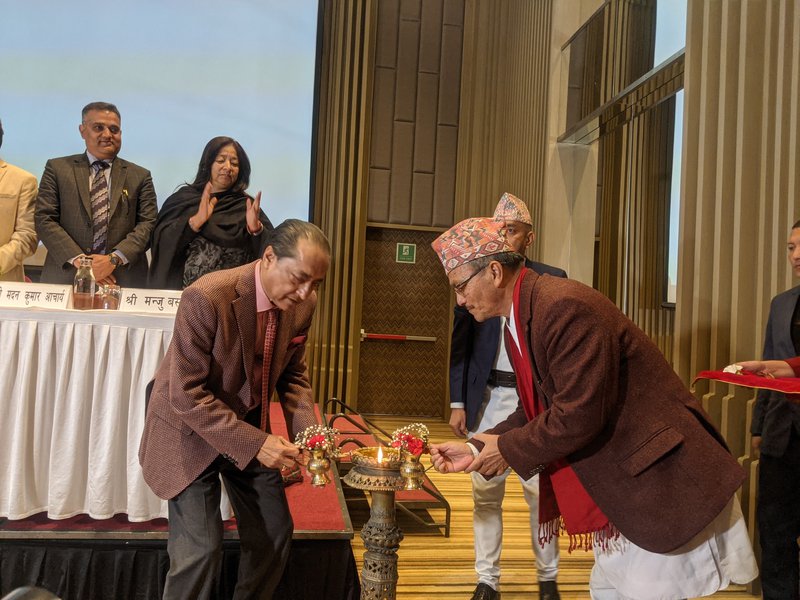 some sectors and no 2 in others. We will aim to remain in the top 3," declared chairman Pande. He said that Nepal needs to go for another round of mergers to shorten the number of banks saying Nepal to limit the number of commercial banks to 7. In this sense, the day chosen for the inauguration of the integrated bank is most appropriate. ‘After the merger, NIMB has now 296 branches, 59 Extension Counters,109 Branchless banking services and 279 ATM.

After the merger of the two banks, Pande is chairman and Jyoti Prakash Pandey is the chief executive officer.

.The integrated business of Nepal Investment Bank and Mega Bank is taking place on the 27th of Push. The central office and branch office of both banks will be closed for two days on the 25th and 26th of February for data migration and other purposes while the integrated business is being started.

As per the deadline set by the Nepal Rastra Bank (NRB), the banks have the time till January 6, 2023, to go for the merger.

According to the merger committee member and Mega Bank Board of Directors member Gopal Khanal, they plan to merge and launch integrated transactions within the deadline given by the central bank.

In the last two weeks, six banks have already merged. After the Nepal Rastra Bank (NRB) took a 'pressure policy' for the commercial banks to merge, the latter have gone/are going into mergers. Global IME Bank and Bank of Kathmandu merged and the integrated business started on Sunday.

More than half a dozen other commercial banks are merging this week. According to the policy put forward by the central bank, there has been a wave of mergers between big commercial banks.

Maha Prasad Adhikari, governor of NRB, said that by increasing the size of the capital, mergers were encouraged to create strong and capable banks. "A merger reduces the cost of financial intermediation. It helps to create a strong and capable organization," he said. He said that banks with large capital are also needed to increase investment in large projects.

According to international practice, the central bank has been encouraging mergers to create competitive and investment-capable banks. 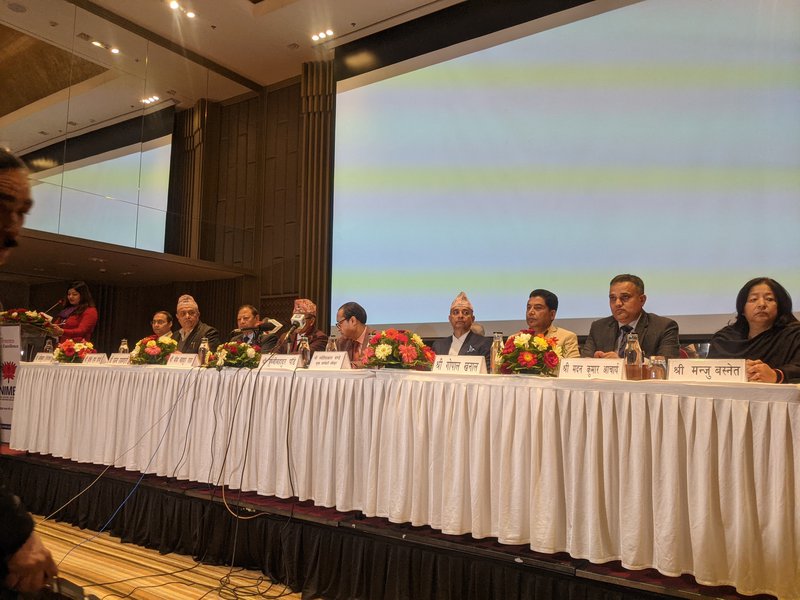 In his address chairperson Pande said that Due to the large number of banks in contrast to the size of the population and economy of the country, a merge is the best option. "Mergers of banks and financial institutions have increased their paid-up capitals. This also has increased risk management capabilities along with capital growth. Management costs are reduced as well," said Pande.

In the financial sector, this week is seen to be the week of bank mergers. Prabhu Bank Limited and Century Commercial Bank Limited merged and started an integrated business. Similarly, Himalayan and Civil Bank have also called for a general meeting for a merger between the two banks.

Similarly, a preliminary agreement has been signed between Laksmi Bank and Sunrise Bank for a merger. Kumari and Nepal Credit and Commerce (NCC) Bank are also merging.

Chairperson Pande said that depending on the size of Nepal's economy, 6 to 7 commercial banks would be enough for the country. He said that after the completion of the first phase, there will be a second phase of the merger.

The merger of commercial banks is currently in full swing and the message given by Chairman Pande on the day of the joint business launch of NIMBL is historically significant.

His choice of this day to launch the merger and his commitment to strengthening the country's economy and banking sector, is a powerful message as the country observes Prithvi Jayanti, a day dedicated to the legendary King Prithvi Narayan Shah and those associated with him, and to strengthen national unity.

As it says pick a leader who will keep jobs in your country by offering companies incentives to hire qualified and competents. Pick a leader who has intellectualism and wisdom, not ignorance, stability, not fear. Pande has shown in his banking carrier what is required.