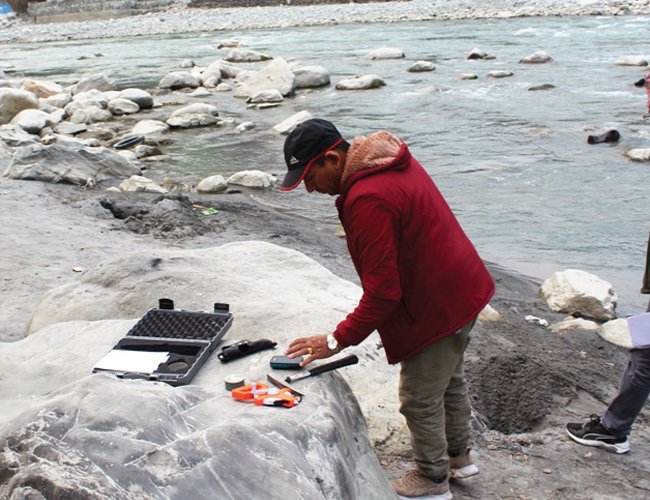 Although the Kali Gandaki River connects the common civilization of Nepal and India, it is yet to come into wide public discourse. From legendary sage Jad Bharat to Saint Byash, the river has also direct connections with the Ram.

According to a religious book, King Dasharath came to Ramdi of Syangja district, a riverside of Kaligandaki to invite Bashistha to perform Yagya to have princes for him. After the performance Yagya, Ram, Laxman, Bharat and Shatrughan were born.

The recent decision of Nepal to send a stone from the river to build the statue of Ram is a right and highly significant decision to reconnect Nepal and India religiously and civilization.

Kaligandaki River is used to build the statue of lord Vishnu. Two prominent statues of Vishnu in south Indian including the Padmanabhaswamy Temple of Kerala and Srirangam in Tamilnadu also constructed from Saligram.

The Kaligandaki River, which originates from Damodar Kunda in Mustang district, and flows through Myagdi's religious destination Galeshwor, is mostly known for the availability of 'Shaligram Shila'.

Among many types of stones found on the banks of the Kaligandaki River, Shilas are stones with special properties. And Shaligram Shila, a particular variety of Shila which is hard to find, is believed to be the representation of God Vishnu by Hindus.

A team of experts has been studying the Shilas for the possibility of crafting a statue of Lord Ram in Ayodhya of India. The team was deployed under the Gandaki Province government.

"Shilas are found in the three-kilometer section of the river from the south of Beni to Galeshwor. A study is being performed with a plan to send Shilas to Ayodhya via Janakpurdham," said Surat KC, Mayor of Beni Municipality.

The team has already arrived on the bank of the Kaligandaki River in the Beni area to identify and study the Shilas.

"Study has been performed in two Shilas, each of 7 feet in height, 5 feet in length and 3.5 feet in width. If Shilas of our river is taken to Ayodhya, it would promote our place as well," said Mayor KC.

The office of Shri Ram Janmabhoomi Teeth Kshetra sent a letter to the Janaki Temple on November 5, 2022, asking it to send the Shilas to Ayodhya.

A meeting of the Council of Ministers held on December 18, 2022, had decided to provide two pieces of Shila from the Kaligandaki River area to the Janaki Temple in Janakpurdham.

After the decision, the process to study the stones and ways to transport them has been started, informed Mayor KC.

The Kaligandaki River has religious importance, and Hindu texts show that sages, including Pulaha, Kapila, and Jadbharat, attained Siddhi (completeness) by meditating along the bank of the river's Beni-Galeshwor section.

"The Kaligandaki is a holy river and it has made Shilas along its bank purer every day. The two pieces of Shila will be transported to Janakpurdham first," said Kulraj Chalise, a member of the Shila Study, Excavation and Relocation Campaign and a scholar of the Krishnagandaki River.

"The Shilas will be used to construct the statue of Lord Ram in Ayodhya. It is expected to further strengthen the relationship between Ayodhya, Janakpur and Muktinath culturally and religiously," said Chalise.

He also informed that Guru Rajendra Singh Pankaj has arrived in Pokhara from Ayodhya to receive the Shilas. "Since they are the gift of Nepal, it is our responsibility to transport the Shilas to Ayodhya. The provincial government will be looking after it," added Chalise.

Mayor KC informed that the municipality would provide necessary assistance once the study team decides which Shilas they want to take.

Given such a long relationship between the Kaligandaki river and with the baidik civilization, the decision to use the stone of Kali Gandaki River to build the statue of Ram further enhances and strengthens Nepal-India relations.

US Under Secretary Nuland Pays A Courtesy Call On PM Prachanda By NEW SPOTLIGHT ONLINE 10 hours, 47 minutes ago

US Under Secretary Nuland Arrived In Kathmandu By NEW SPOTLIGHT ONLINE 1 day, 1 hour ago

Nepal Has Huge Potential As A Producer Of Green Energy: British Ambassador Pollitt By NEW SPOTLIGHT ONLINE 1 day, 13 hours ago