At a time when Nepal has been facing acute malnutrition as a major health problem, Action Against Hunger organized an International Conference on Child's Health and Development. Since Nepal has been implementing a Multi-sector Nutrition Plan, the international conference on improving children’s lives, maximizing their abilities and challenges in linking child’s health, nutrition and early childhood development is very significant 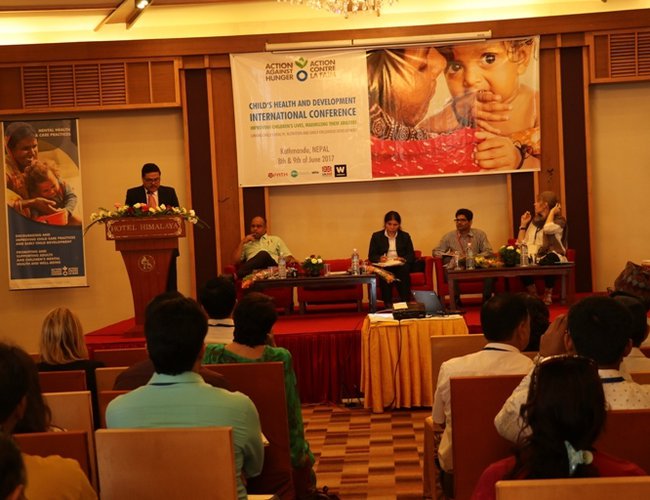 As Nepal has been facing the problem of acute malnutrition and finding ways to improve the situation remains elusive, the Action Contre la Faim (Action Against Hunger) organized an International Conference on Child’s Health and Development, addressing the challenges in linking child’s health and early childhood development by presenting scientific studies and programmatic innovations.

According to reports, about forty-one percent of children in Nepal suffer from chronic malnutrition. In far west and mid west, stunting is a major problem. According to a study, the process of stunting occurs between the conception period and two years of age. Similarly, the population of Nepal, particularly the most vulnerable women and children, are affected by all the major micronutrient deficiencies.

The studies have revealed that the cost of mineral and micronutrient deficiencies alone is estimated at 2-3 percent of GDP. The immediate causes of chronic malnutrition in Nepal include poor feeding and care practices, insufficient nutrient intake, high rate of infection and teenage pregnancy.

Given the alarming state of malnutrition prevalence in the country, Nepal has been implementing the Multi-Sector Nutrition Plan (2013-2017) for accelerated reduction of maternal and child deaths for reasons of under nutrition. Organizing this kind of international conference by organizations like ACF will greatly contribute to Nepal.

The conference addressed the importance of the first 1000 days of life that are known to be the foundation for multiple aspects of the child’s development such as emotional, cognitive and motor that favor the child’s mental and physical well-being.

Various studies and researches have been carried out on child’s health and development. They show the evidences on various factors that contribute to their nutrition status and care practices.

There were a total of 16 papers, seven posters presented in one and a half day by experts from France, Ethiopia, Bangladesh, USA, Zambia, South Africa and Nepal on the issue of maternal mental health and child development.

Inaugurating the program, Rajendra Prasad Pant, Director General, Child Health Division, said that all the participants shared their knowledge and made the conference effective.

Highlighting “malnutrition” as a major issue in Nepal, he added that there are thousands of child deaths because of malnutrition. He emphasized on the importance of emotional, cognition and motor development as major factors for child development. This issue cannot be compromised at any cost, he said, assuring that Health Department is committed to bring about changes on this critical issue.

Sudipta Badapanda, Country Director, Action Against Hunger Nepal, thanked all the participants for their presence and shared about the organization both at a global level and Nepal level.

He explained about how the organization had done good work to fight against malnutrition in Saptari District in partnership with District Public Health Office and also integrating other key sectors of Food Security and Livelihood (FSL), Water Sanitation and Hygiene (WASH) and Mental Health and Care Practices (MHCP). He added that FUSAM (follow up of severely acute malnourished children) research has tried to link Early Childhood Development (ECD) with nutrition.

She shared about how the approach is inclusive of humanitarian psychosocial support in the treatment of malnutrition and support to women from the family and child care. Psycho effective relationship (child love, care, stimulation) is important in MHCP.

“Action Against Hunger’s approach has been both contextual axis and thematic axis. Thus, we tried to see the life at 11 months after the treatment in FUSAM. Maternal depression is one main focus of the organization in MHCP. We worked from local level to Global level and vice/versa. Another aspect of Action Against Hunger is technical development, operational programs and advocacy. MHCP at present are in 18 countries and more than 2800000 people are supported,” said Dr. Bizouerne.

Divided in several sessions, Debjeet Sen, Regional Specialist in Early Childhood Development (ECD) & Nutrition, PATH, South Africa shared on the topic “why ECD matters” in the first session. He emphasized on importance of intervention in early days to be critical as the child’s brain develops rapidly at this stage. Thus it becomes necessary to invest at an early age of a child.

Karine shared about FUSAM research carried out in Saptari district, Nepal, one of the working districts of Nepal Mission. She said that purpose of the study was to see the effectiveness of combined psychosocial nutritional effect on the treatment of Malnutrition in Saptari District.

According to a study fifty-two percent of the mother conducted 4/5 sessions. The outcome of the intervention was to make the mother and the family to be more aware on child needs and development.

“Some of the challenges faced during the study were geographical difficulty, lack of recognition of mental health in the district,” said Karine.

In another presentation, Dr. Jena Hamadani, ICDDRD Bangladesh presented the transition to scale an integrated Program of Nutritional Care and Psychosocial Stimulation to Improve Malnourished Children’s Development in Bangladesh

She shared about the importance of ECD and under nutrition being one of the major problems of Bangladesh."Thus, it was decided to scale up the psychosocial stimulation in the country especially in rural areas,” said Dr. Hamadani.

It was a 2 cluster randomized control trial carried out with 2-24 months of children around the community clinics. Intervention included a curriculum containing child stimulation aspects (homemade toys, child stories, games, puzzles,) and child care education to the mothers.

The study showed that children in extreme poverty performed worse than the reference children in all the developmental domains. Among the 819 extremely poor children, 325 (39.7%) were stunted, 135 (16.5%) underweight and 27 (3.3%) wasted. The lowest performance was observed in younger children who suffered from the combination of stunting, wasting and underweight.

“Children living in extremely poor households were not only more likely to be undernourished but they were also highly exposed to less favorable psychosocial factors.  Both conditions negatively affected their developmental outcomes independently. Intervention, for these children, should integrate home-based developmental stimulation and nutritional rehabilitation,” she said.

“The review aimed to summarize studies on the effectiveness of maternal mental health interventions that aimed to improve early child development outcomes in low- and middle-income countries,” said Claire.

“The review aimed to summarize studies on the effectiveness of maternal mental health interventions that aimed to improve early child development outcomes in low- and middle-income countries. Feeding time is the best time to increase interaction with the children,” said Granger.

In a topic prevalence, risk factors and outcomes of severe acute malnutrition among infants aged over six months, Yasir Arafat, Save the Children, Bangladesh said prevalence of SAM higher in pre harvest compared to post harvest situations. SAM children were more prone to hospitalization than non-SAM child in both baseline and end line survey. Management/treatment of SAM children under 6 months was provided only in inpatient/clinics.

A growing body of evidence suggests that early childhood interventions can offset or at least lessen the negative impact of early adversity and improve developmental outcomes in the short and medium run. Trial on the impact of a community-based parenting group intervention in Zambia was carried out.

The intervention package positively impacted child physical growth and neuro-cognitive development at the end of two years. In settings like Zambia, where a substantial proportion of children fail to reach their developmental potential, parenting groups hold great promise for improving child health and welfare.

On topic baseline findings of Knowledge, Attitude and Practice Study of Caregivers from 3 Districts of Nepal: Challenges for Parental Education, Dipu Shakya, UNICEF (Nepal), presented the study take in the five district piloting was carried out in 5 districts through 500 ECD centers targeting 10000 caregivers.

After earthquakes in Nepal, Save along with Research Inputs and Development Action (RIDA), a research agency conducted the baseline study of 0 – 2 year old children in Sindhupalchok using the Harvard University developed Caregiver-Reported Early Development Index (CREDI) tool in 11 VDCs, including five control and six treatment VDCs. The study used quasi-experimental design to enable measurement of changes in children’s learning and development outcomes due to the project.

In a topic, assessment of cognitive Development Among infants in Bhaktpur Nepal, Ram Krishna Chandyo, Community Medicine Department, Kathmandu Medical College (Nepal) presented papers on ongoing clinical trial of vitamin b12 for growth and neurodevelopment among 600 infants in Bhaktapur, Nepal, we the trial

The study showed that Vitamin B12 is very crucial for neuro development in first 1000 days to maximize the ability of child. It is equally important to integrate micronutrient in child development.

In a topic modeling, the impact of a psychosocial Intervention on Nutrition Outcomes in SAM children in Nepal, Dieynaba N’diaye, Action Against Hunger (France), presented a model-based cost-effectiveness analysis alongside the Follow-Up of Severely Malnourished Children (FUSAM) randomized clinical trial was carried out in Nepal.

At the event moderated by Dr. Ojaswi Acharya, deputy country director, Action Against Hunger Nepal, and the panelists were Dr. Naomi (London), Dr. Kedar Marahatta (WHO), Dr. Jena (ICDDRB), Cecile (Action Against Hunger), who said that research and assessment results serve as an important tool to take things forward and to have operational implication in development of early childhood care.

The program concluded recommending various suggestions. The seminar suggested that the investment done on early childhood give return with socio-economic aspect.

“There is a strong link between responsive care in relation to maternal health and child health both on prevention and promotion of mental health. It is not only the sole responsibility of a mother to take care of the child but it is equally important for the father and the community to contribute in child’s development and health,” states the resolution.

Integration remains an important factor and now that there are evidences from the studies and researches that will guide the health system in Nepal, it should create a better platform compared to a decade ago for more integrated interventions in future. 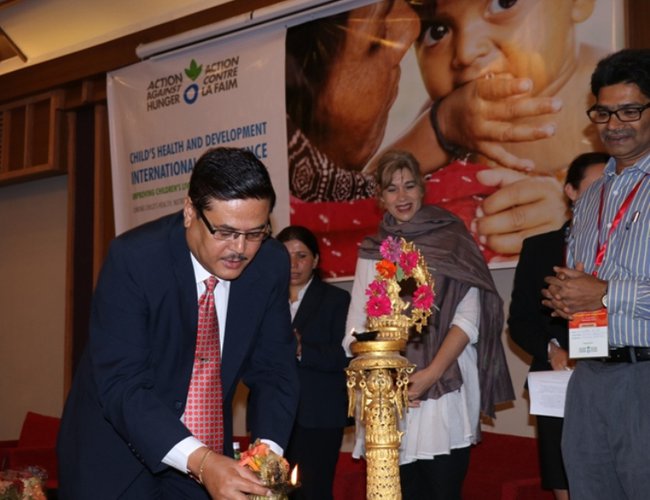 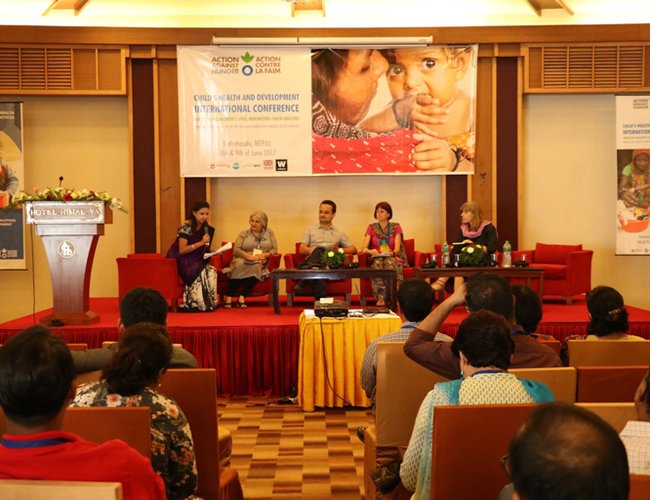 China Reports Over 6,300 COVID-19 Patients Died In The Week Through Thursday By Agencies 2 days, 11 hours ago