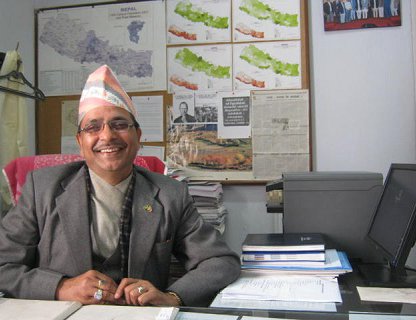 How do you look at the development plans in Nepal?

Why only three years for the interim plans?

Comparatively, when there is a stable government, the plan mostly is prepared for five years. Since Nepal is in transition under interim constitution and the country is yet to see a government with a long term vision, five-year plan cannot be the right way to go. Once the new constitution is promulgated and new elections is held for a fixed term government, then only the country will require five-year plans.

Why is this so?

An elected government will have long term policies and planning and it wants to translate the long term vision in reality.  If the government is elected for a full term, there will be the need of five-year plans. It is required for a long term perspective. The present scenario is that there is uncertainty everywhere, we don’t know when the new government will come or go. We are unable to bring the new budget even for the coming fiscal year.  Our budget is based on the expenditure of the last year. In this period of uncertainty, a five-year plan is not accepted. This is the temporary budget for temporary government. We are now working for the new interim plan.  Considering the fact that long term plan like five years planning will be unacceptable to future government, National Planning Commission is preparing the three years interim plan.

What are the major highlights of the proposed three-year interim plan?

We have proposed various programs and plans. The plan will include 12 to 13 chapters. It will also include the review of previous three years plan, achievement in MDGs and success. There will be review of the challenges faced by us and the efforts made to meet such challenges.  There will be the background to it. The chapters include overall economic performance and macro-economic stability, macro economic performance and challenges. The plan will also include the chapter dealing with the maintenance of macroeconomic stability, advancement of works on reform and governance for the stability for financial sector. It will forecast GDP, expenditure, saving and revenue collections, management of loan, foreign aid and foreign direct investment. There will be projections of foreign direct investment. There will also include the monetary policy including micro finance.  In the development sectors, there are four actors,  which include public sector, including local bodies, private sector, cooperatives and community and non-governmental  sector. There are also public enterprises and public institutions.

How will the new interim plan see the issues of poverty alleviation?

Human resource management and poverty alleviation is one of the important components of the coming plan. This is a cross cutting issue. There is a separate chapter for this. This chapter will deal with labor and employment issues, including the foreign employment. This chapter will also deal with poverty alleviation and skills development. Our aim is to bring down poverty by 21 percent by 2015. Now our level of poverty is 25.16 in 2010.

How do you see the sustainable development?

How will the coming plan address the Disaster Risk Management issue?

Other important topic will be the Disaster Risk Management.  This is also a cross cutting issue and it is one of the important sectors. Since disaster is a multi-dimensional issue, it is not only related to the Ministry of Home Affairs or Forest and Soil Conservation Ministry or Ministry of Energy. Disaster is a multi-dimensional issue, which includes natural disaster, calamities and so on. The coming three years plan will give priority to the Disaster Risk Reduction and Disaster Risk Management.   It will include agriculture, irrigation and food security, forest and forest protection, land reform and agricultural productivity. There will also be the agenda on environment and climate change. There will also be industry, trade and  tourism related issues.

How will the coming plan address the population issue?

Under social development chapter, the forthcoming plan will also include population management. According to census report of 2058, Nepal’s population growth was 2.25 percent and now it declined to 1.35 percent in the recent census. Some experts hold the view that this decline is the result of migration of 1.9 youth population.  Considering Nepal’s total land available, population management is important for the country’s development.  Nepal consists of 35 percent mountains where 7 percent population lives. Some 42 percent of the population lives in 42 percent of land available in the hill. In 23 percent total available land, 50.3 percent of country’s population lives. The high level of migration is taking place in terai. Low land of hills and district headquarters and urbanization is taking place in fertile land of hill. Due to this, our productive land is declining. One of our important chapters will also include how to manage the population. The plan will try to set the number of family members. The plan will give priority to population policy.

How do you see the social agenda?

Along with other issues, education, drinking water and sanitation are other important areas. In the social sector, we want to incorporate the idea of social protection. Talking about social safety, we are proposing alternatives to pension for civil service. Annually, a huge amount of money is spent in pension. The plan will discuss social welfare fund. Other areas include women, children, persons with disability, single women and marginalized community. There will also be a chapter for the adolescent. It will include the employment opportunity. Gender and inclusion will be other important areas. Madheshis, janjatis and adibasis, women, Muslims and backward regions and issue of third gender will also be dealt with in the plan.

What about the infrastructure development?

Another important area will be infrastructure development. Along with hydro power, we will also give high priority to alternative energy. As we have been celebrating alternative energy week, this will get a priority. In the road sectors, the Hulaki Rajmarg will be completed and mid-hill highway and existing roads and high ways will be maintained. Development of electric rail, metro in Kathmandu and water ways are other programs.

Do you have any plan for rehabilitation and reconstruction?

The other important sector is rehabilitation and reconstruction. The rehabilitation of buildings and infrastructure destroyed during the conflict period will be included.  Another important chapter will be Peace and Governance. For the first time, our plan will incorporate it.  Our ultimate objective will be to achieve long lasting peace and address the related issues. We will also include the strategy and plans for administrative aspects and good governance. Legal sector will also be given high priority. Anti-corruption, financial management are other important areas.  People’s participation, security issue, human rights and human trafficking will also be there. There will also be a chapter for statistics. There will be separate chapter for implementation and formation of plan. This time we will also include research and development chapter. We want to link research with universities. The research will be on any issue.

How will NPC finalize it?

Nepal's Stand Is For Truth To Prevail, Come What May: DPM Pokhrel By NEW SPOTLIGHT ONLINE 3 weeks, 5 days ago