Although South Asian countries have made a lot of progress in various sectors, the access to sanitation in the region is still low 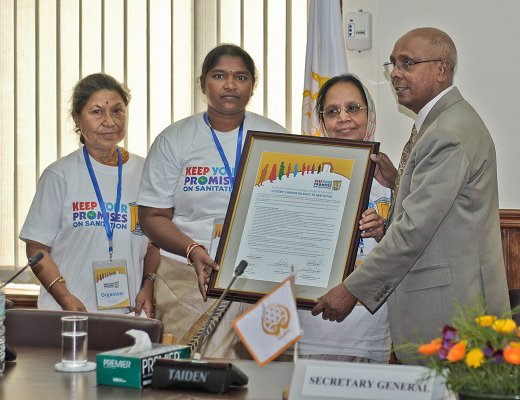 A two-day South Asia Regional Campaign on Sanitation concluded after intense interactions among members of parliament and civil society, who gathered in Kathmandu, after adopting a citizen charter which they handed over to the SAARC secretariat.

Along with organizing a one day interaction, the program also included public events at Lainchaur where various speakers highlighted the importance of sanitation to enjoy a decent life. Welcoming the gathering, Ashutosh Tiwari, country representative of WaterAid Nepal, highlighted the importance of this kind of regional gathering of civil society members and members of parliament to press for increasing the investment in sanitation sector.

According to experts, sanitation and hygiene still suffer from a lack of public sector finance for achieving the Millennium Development Goals and universal coverage in comparison with other social sectors.  According to WaterAid Nepal's national budget analysis, the bottom five districts for sanitation coverage have received less money than the top five districts with higher sanitation overage.  For instance, with coverage of 11 percent, Bajura district of far western region receives Rs.122 million rupees while Kaski, with 87 percent coverage, received Rs.429 million in the last years.

At a time when South Asia's overall economic and other indicators are moving higher, their indicators for sanitation is still among the worst where more than half of the population don't have proper toilets and open defecation is almost common.

Realizing the importance of sanitation to improve the overall social indicators, Members of Parliament and civil society leaders discussed the issues like regional campaign on sanitation and the draft of the citizen charter.

Annually, hundreds of thousands of girl children drop out from schools because there are no separate toilets for them to use during their monthly period and hundreds of children die due to diarrhea and other such diseases. However, sanitation is yet to be made a national agenda and issue.

With an aim to call decision makers to keep their promises to increase the allocation of funds targeted at sanitation for poor and excluded people, South Asia Regional Campaign on Sanitation concluded on 18-19.

MPs and civil society members from Nepal, India, Bangladesh,  Srilanka and Pakistan took part in the campaign. Welcoming the delegates, former Minster for Environment, Science and Technology and members of parliament Ganesh Shah made it clear that there was the need to have broader public awareness campaign to increase people’s access to sanitation. Mustafa Talpur, regional advocacy manger of South Asia, said the campaign will help to press the policy makers to look on sanitation agenda.

Members of parliament from the region, civil society workers and government officials interacted in the two days meeting and shared their activities.  They stressed the need to spend at least 1 percent of GDP or an adequate percentage of the national budget to achieve universal access to sanitation and third should be spent on maintaining the existing infrastructure.

Parliamentarians from Pakistan, India, Bangladesh & Sri Lanka, ex-CA members from Nepal and two members of the House of Lords joining 1,000+ activists from around the region in the street-walking rally on Tuesday for sanitation for all in South Asia.

They also called to identify and officially recognize poor and marginalized areas and groups, and develop separate sanitation investment plans to bridge these service gaps in both rural and urban areas. In the interactions, the members of parliament also discussed on the agenda in increasing finance for sanitation, targeting the allocated resources for poor and marginalized and effective engagement in post 2015 MDG Development Framework. During the period, the UK Parliamentary delegation also joined by demonstrating their solidarity and cooperation for the cause.

According to the study, in addition to child deaths, there is also a major economic impact on countries with inadequate sanitation and hygiene. The countries like Nepal have to pay higher economic prices due to lack of sanitation. Despite the commitments at higher political levels, the state of sanitation in the region is yet to improve.

Locusts Reached To 26 Districts In Nepal, Destroyed The Crops By NEW SPOTLIGHT ONLINE 3 days, 20 hours ago